Authorities searched for a motive for the gunman who killed 10 people at a Los Angeles-area ballroom dance club during Lunar New Year celebrations, slayings that sent a wave of fear through Asian American communities and cast a shadow over festivities nationwide.

The suspect, 72-year-old Huu Can Tran, was found dead of a self-inflicted gunshot wound on Sunday in the van that authorities say he used to flee after being prevented from attacking another dance hall.

The mayor of Monterey Park said Tran may have frequented the dance hall he attacked. 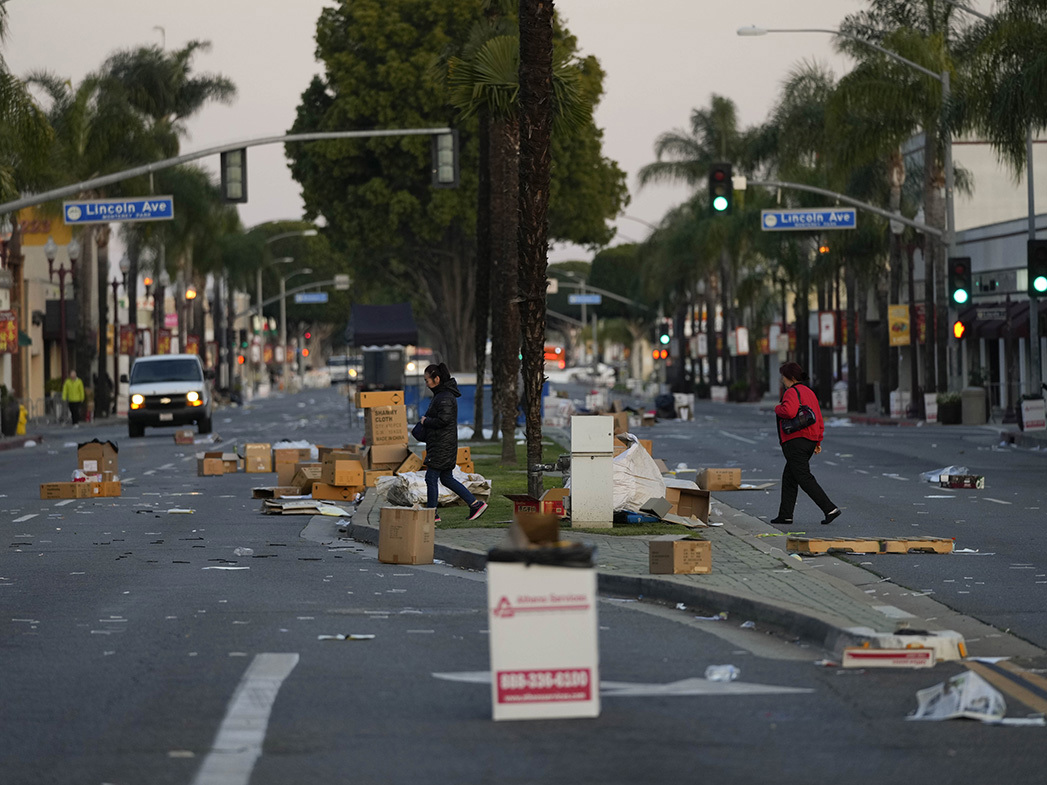 The massacre was the USA's fifth mass killing this month — and it struck one of California's largest celebrations of a holiday observed in many Asian cultures, dealing another blow to a community that has been the target of high-profile violence in recent years.

It was also the deadliest attack since May 24, when 21 people were killed in an elementary school in Uvalde, Texas.

Authorities said Saturday's assault could have been even more deadly.

A man whose family runs the venue confronted the assailant in the lobby and wrested the gun from him, The New York Times reported.

READ MORE: US attorney goes on trial for killing wife and son 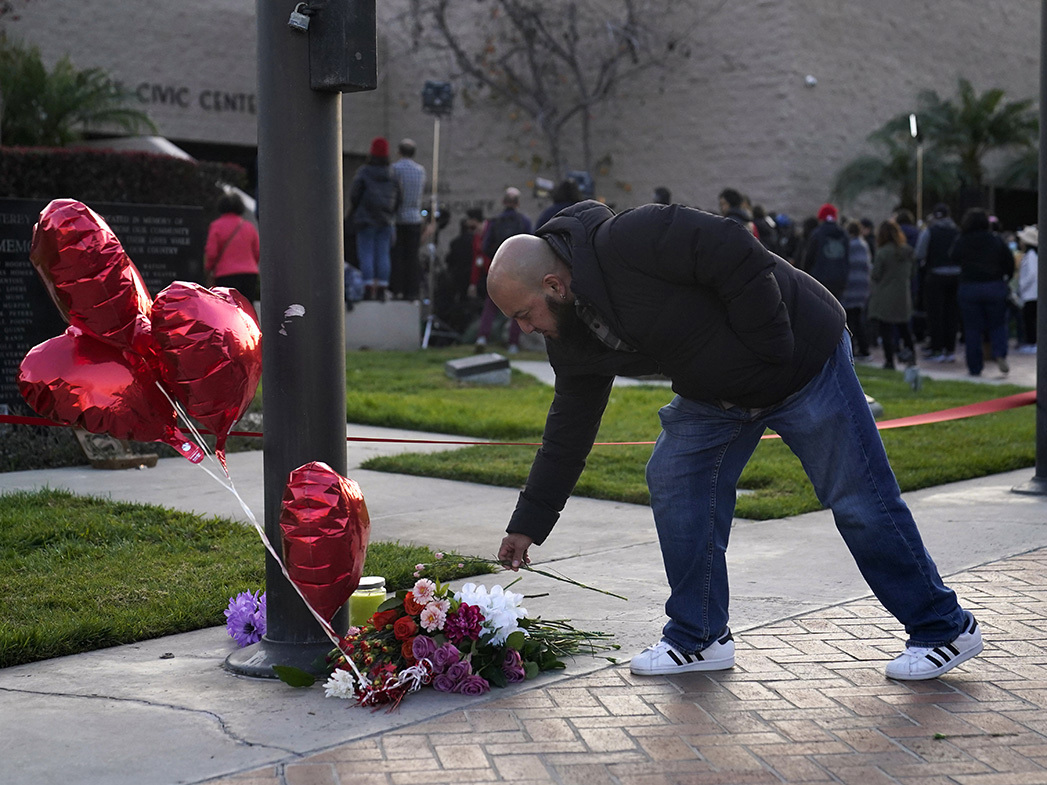 "We do understand that he may have had a history of visiting this dance hall and perhaps the motivation has to do with some personal relationships, but that's something that I think investigators are still uncovering and investigating and we'll probably find out more in the hours ahead or even days ahead," said Monterey Park Mayor Henry Lo.

Public records show Tran once had addresses in the city and neighbouring ones.

But Lo and Los Angeles County Sheriff Robert Luna stressed that the motive remained unclear for the attack, which also wounded 10 people. 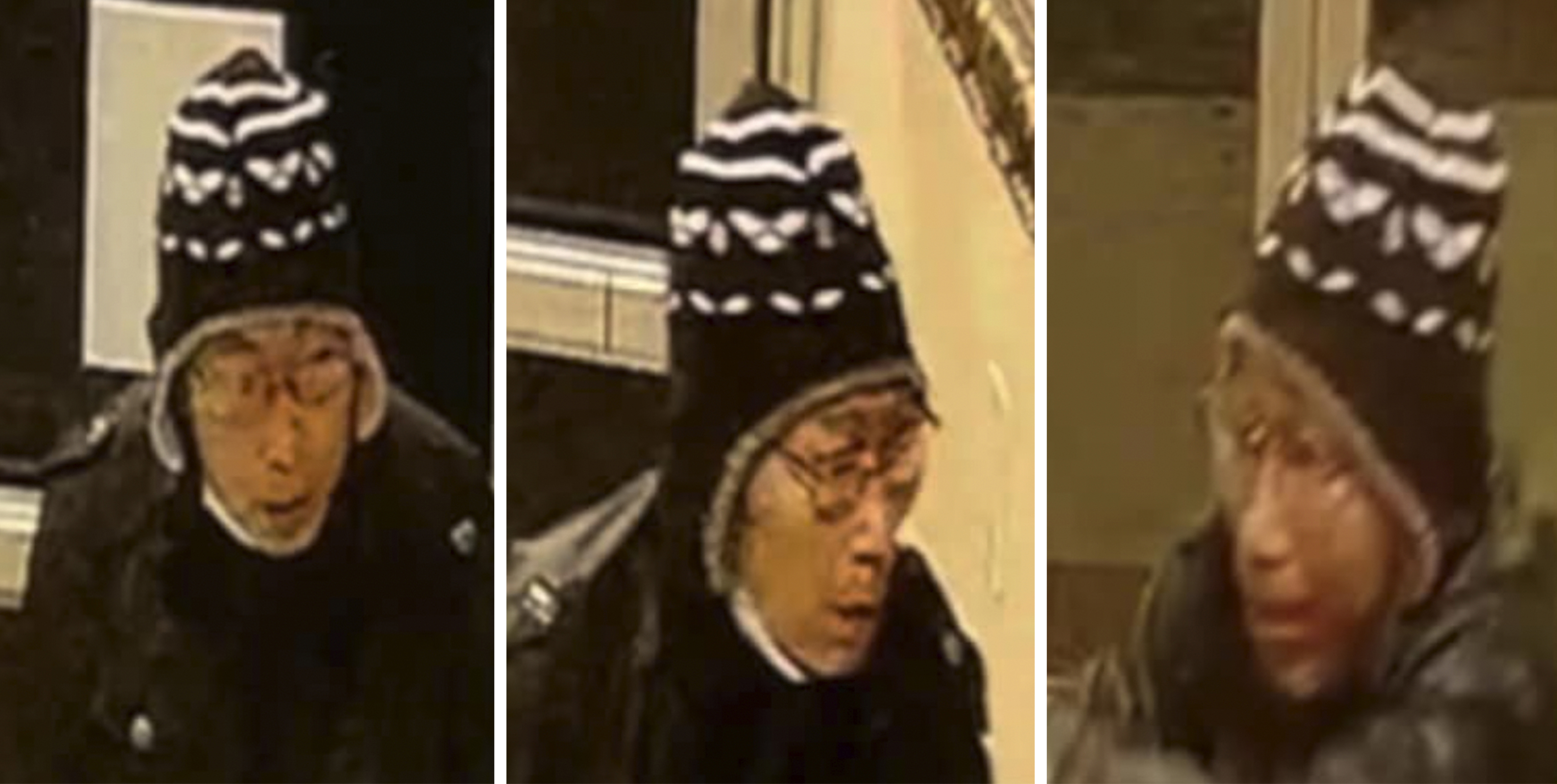 Speaking at a Sunday evening news conference, Luna said all of the people killed appeared to be over 50.

No other suspects were at large, according to the sheriff.

The suspect was carrying what Luna described as a semi-automatic pistol with an extended magazine, and a second handgun was discovered in the van where Tran died.

There, they found carnage inside and people trying to flee through all the doors. 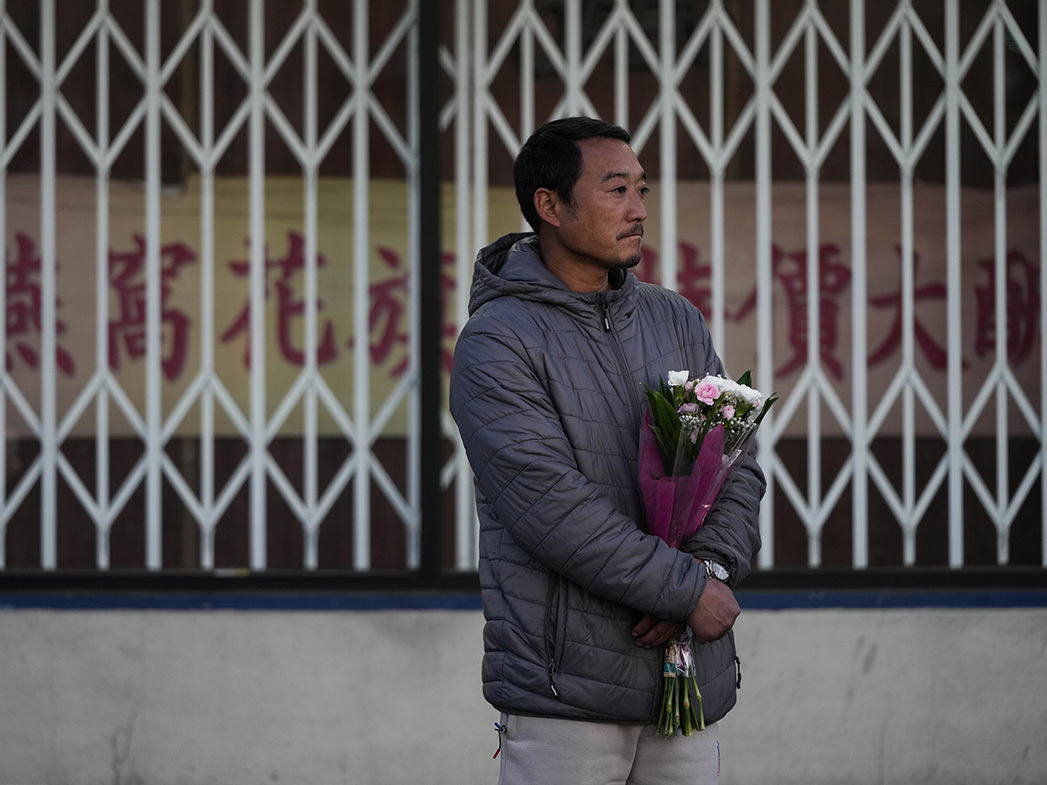 "When they came into the parking lot, it was chaos," Wiese said.

About 20 minutes after the first attack, the gunman entered the Lai Lai Ballroom in the nearby city of Alhambra.

Brandon Tsay was in the lobby at the time, and he told ABC's Good Morning America that he thought he was going to die.

"Something came over me.

"I realised I needed to get the weapon away from him, I needed to take this weapon, disarm him or else everybody would have died," Tsay said.

"When I got the courage, I lunged at him with both my hands, grabbed the weapon and we had a struggle."

Once Tsay seized the gun, he pointed it at the man and shouted: "Get the hell out of here, I'll shoot, get away, go!"

The assailant paused, but then headed back to his van, and Tsay called the police, the gun still in his hand.

While Luna told reporters on Sunday that two people wrested the weapon away from the attacker, Tsay, who works a few days a week at the dance hall his grandparents started, told The New York Times that he acted alone.

Stills from security footage shown on Good Morning America showed only the two men struggling for the gun.

Witnesses said the suspect fled in a white van.

The van was found in Torrance, another community home to many Asian Americans.

After surrounding the vehicle for hours, law enforcement officials swarmed and entered it.

A person's body appeared to be slumped over the wheel and was later removed. Members of a SWAT team looked through the van's contents before walking away.

The sheriff's department earlier released photos of an Asian man believed to be the suspect, apparently taken from a security camera.

"The community was in fear thinking that they should not go to any events because there was an active shooter," Chu said, speaking at Sunday's news conference.

"What was the motive for this shooter?" she said.

"Did he have a mental illness? Was he a domestic violence abuser? How did he get these guns and was it through legal means or not?" 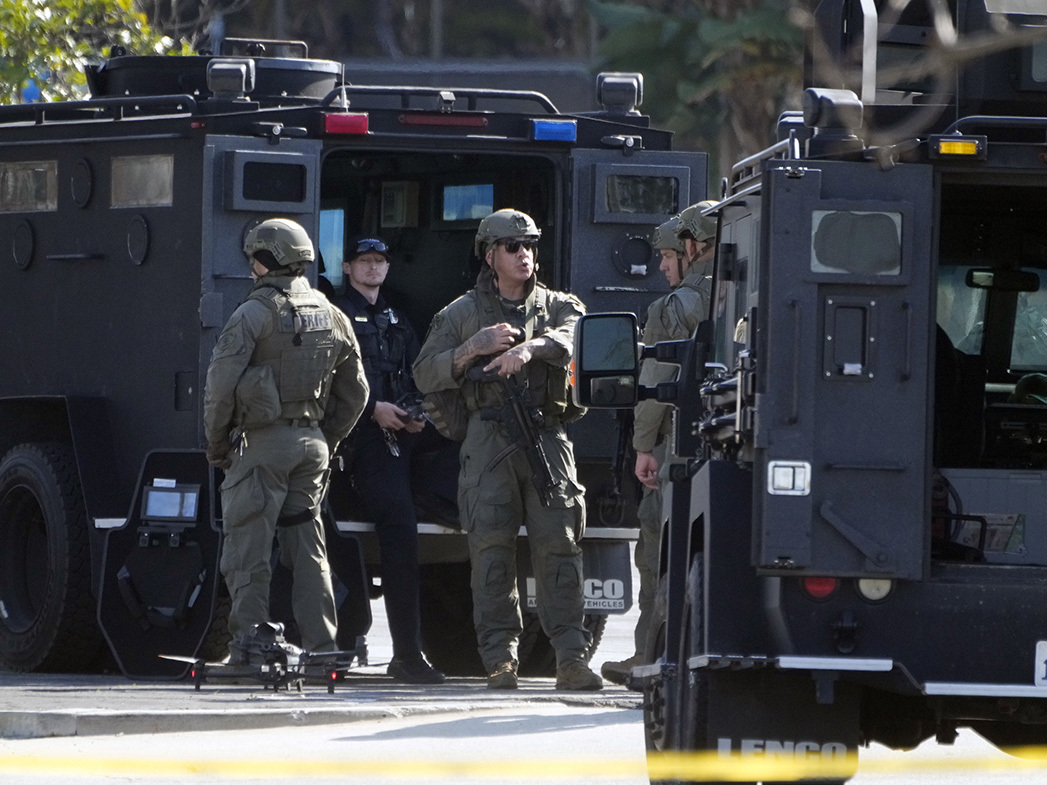 Monterey Park is a city of about 60,000 people on the eastern edge of Los Angeles and is composed mostly of Asian immigrants from China or first-generation Asian Americans.

The shooting happened in the heart of its downtown where red lanterns decorated the streets for the Lunar New Year festivities.

A police car was parked near a large banner that proclaimed "Happy Year of the Rabbit!"

The celebration in Monterey Park is one of California's largest.

Two days of festivities, which have been attended by as many as 100,000 people in past years, were planned.

Tony Lai, 35, of Monterey Park was stunned when he came out for his early morning walk to learn that the noises he heard in the night were gunshots. 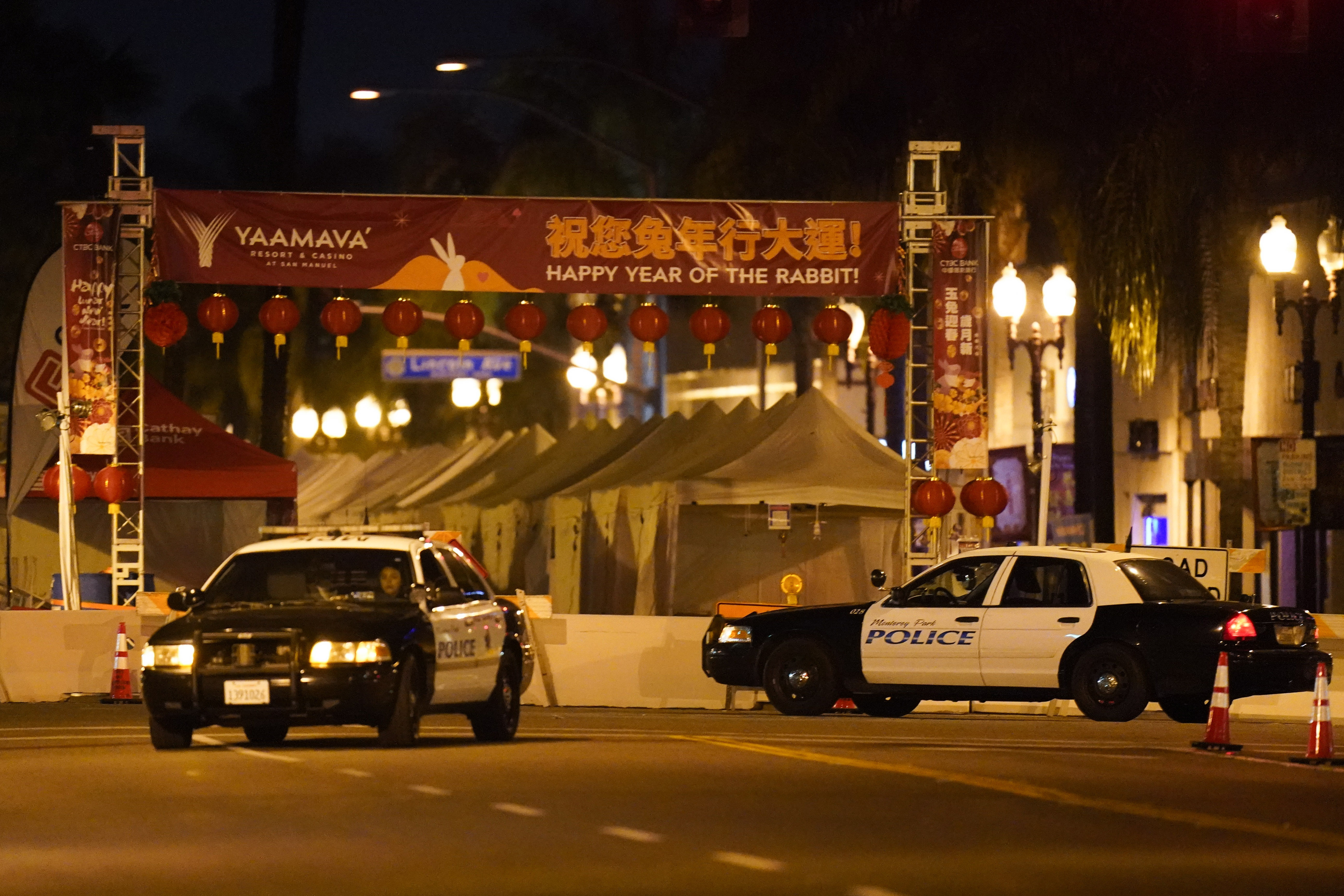 "And we don't even get a lot of fireworks here. It's weird to see this. It's really safe here. We're right in the middle of the city, but it's really safe."

An Associated Press/USA Today database on mass killings in the US shows that 2022 was one of the nation's worst years with 42 such attacks — the second-highest number since the creation of the tracker in 2006.

The database defines a mass killing as four people killed, not including the perpetrator.

California Gov Gavin Newsom visited Monterey Park on Sunday, meeting with victims and their families as well as local officials.

Biden said he and first lady Jill Biden were thinking of those killed and wounded.

The Star Ballroom Dance Studio's website said it was hosting an event on Saturday called "Star Night" from 8pm to 11.30pm.

A post on the Facebook page said thanked people for "your prayers and thoughts during this difficult time".

"What should have been a festive night to welcome the first day of the Lunar New Year turned into a tragedy," it said.

"Our heart goes out to all the victims, survivors, and their families."

The studio is a few blocks from city hall on Monterey Park's main thoroughfare of Garvey Avenue, which is dotted with strip malls of small businesses whose signs are in both English and Chinese.

Cantonese and Mandarin are both widely spoken, Chinese holidays are celebrated and Chinese films are screened regularly in the city.

Wynn Liaw, 57, who lives about two blocks from the Monterey Park studio, said she was shocked that such a crime would happen, especially during Lunar New Year's celebrations.

"Chinese people, they consider Chinese New Year very, very special" — a time when "you don't do anything that will bring bad luck the entire year," she said.

US attorney goes on trial for killing wife and son