A parliamentary inquiry into extremism in Victoria has heard children as young as 10 are increasingly being radicalised online.

The inquiry is investigating the rise of far-right extremism in the state and the risk it poses to communities.

NSN is an online, neo nazi group, which believes in the creation of a white Australia through a race war or societal collapse.

"The NSN is dedicated to recruiting young, impressionable Victorians and it's having some success with children as young as 10," McKenzie said.

He said deradicalisation programs were falling short of countering the influence of extremism.

He said there was "no doubt" extremist groups were turning towards the Australian gunman who killed 51 people in Christchurch, New Zealand in 2019 as inspiration.

"The NSN itself believes deradicalisation programs are a joke to be studied and exploited," McKenzie said.

"Our deradicalisation programs in the prison system, others targeted at schools, aren't actually working.

"Certainly talking to contacts across law enforcement, they're regarded as a bit of a joke." 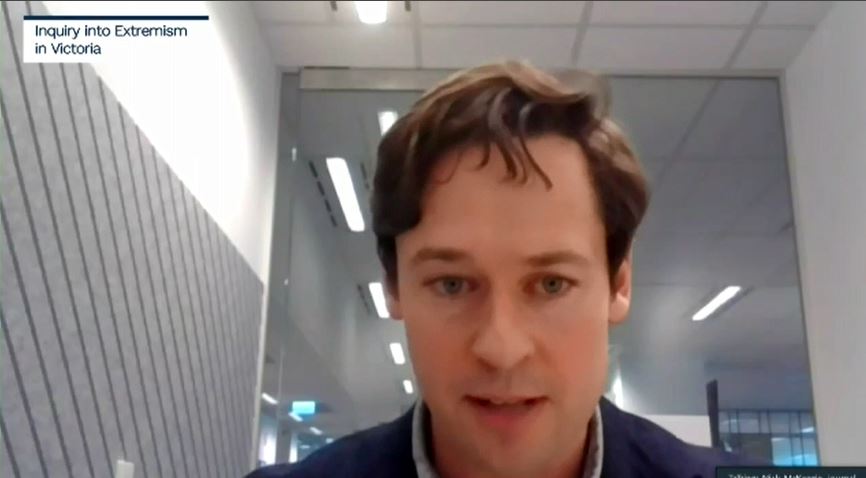 Liberty Victoria president Michael Stanton warned that the pandemic was being used by extremist groups to gain memberships.

"We need to make sure that in responding to those confronting scenes in the Grampians, whether it be Nazi salutes, displays of the swastika or the erection of gallows outside parliament, that we do not have a legislative response that throws the baby out with the bathwater," he said.

"Sometimes that involves tolerating speech that we find offensive or humiliating."

McKenzie said while Victoria Police would not say it publicly right now, they were "overwhelmed by the level of threatening language online from Victorians, especially young Victorians".

"Lots of these companies are effectively impossible to police," he said.