Ukrainians have woken to a grim 2023, reeling from more sirens and fresh missile attacks as the death toll from Russia's massive New Year's Eve assault across the country climbed to at least three.

Another strike at noon Sunday in the southern Zaporizhzhia region killed one person, according to the the head of the regional military administration, Alexander Starukh. But Kyiv was largely quiet, and people there on New Year's Day savoured the snippets of peace.

READ MORE: Zelenskyy says Russia waging war so Putin can stay in power 'until the end of his life'﻿

"Of course it was hard to celebrate fully because we understand that our soldiers can't be with their family," Evheniya Shulzhenko said while sitting with her husband on a park bench overlooking the city.

But a "really powerful" end-of-year speech by Ukrainian President Volodymyr Zelenskyy on New Year's Eve lifted her spirits and made her proud to be Ukrainian, Shulzhenko said. She recently moved to Kyiv after living in Bakhmut and Kharkiv, two cities that have experienced some of the heaviest fighting of the war.

Multiple blasts rocked the capital and other areas of Ukraine on Saturday and through the night, wounding dozens. An AP photographer at the scene of an explosion in Kyiv on Saturday saw a woman's body as her husband and son stood nearby. Mayor Vitali Klitschko said two schools were damaged, including a kindergarten. 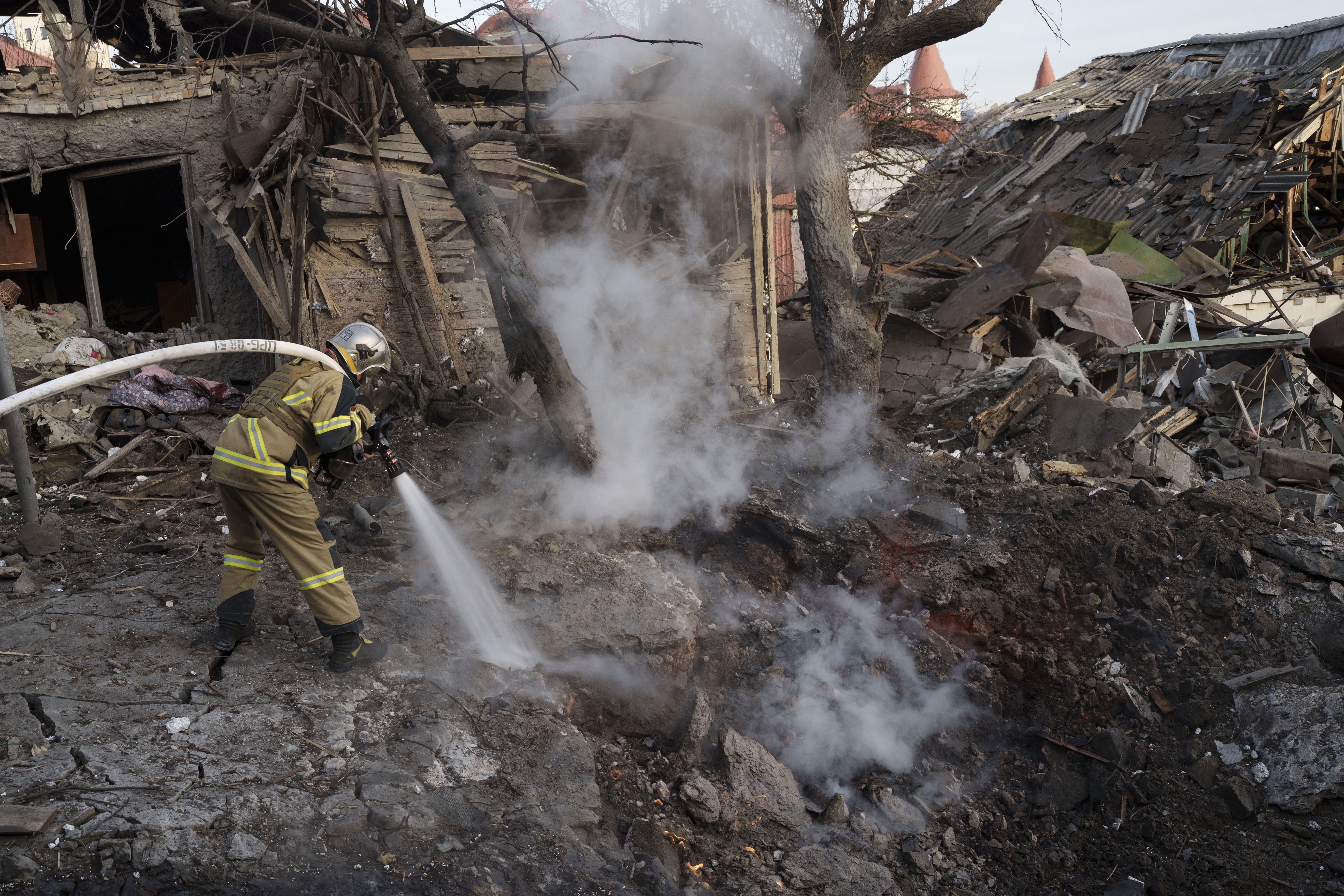 Nighttime shelling in parts of the southern city of Kherson killed one person and blew out hundreds of windows in a children's hospital, according to deputy presidential chief of staff Kyrylo Tymoshenko. Ukrainian forces reclaimed the city in November after Russia's forces withdrew across the Dnieper River, which bisects the Kherson region.

When shells hit the children's hospital on Saturday night, surgeons were operating on a 13-year-old boy who was seriously wounded in a nearby village that evening, Kherson Gov. Yaroslav Yanushevych said. The boy was transferred in serious condition to a hospital about 99km away in Mykolaiv. 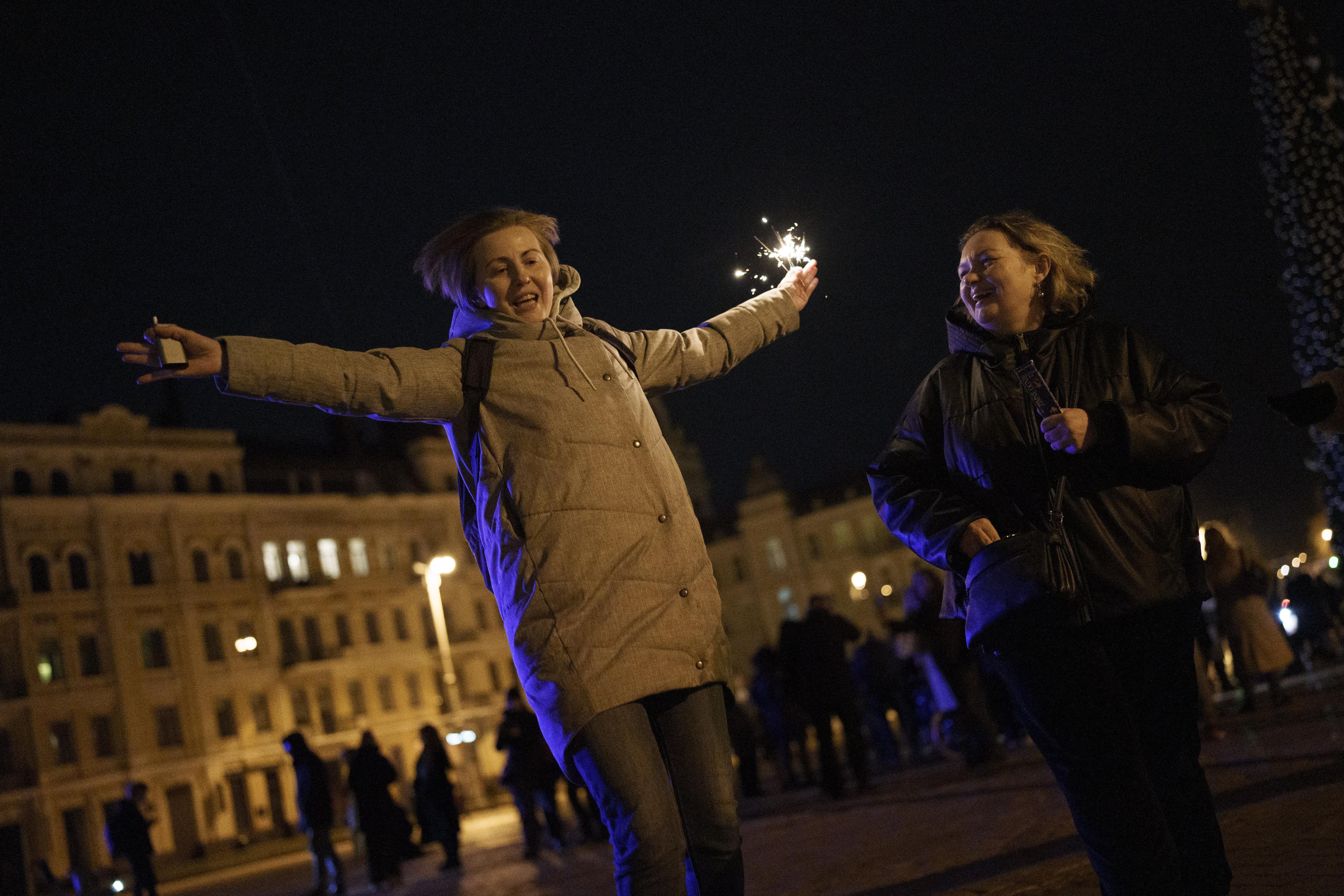 Elsewhere, a 22-year-old woman died of wounds from a Saturday rocket attack Saturday in the eastern town of Khmelnytskyi, the city's mayor said.

Instead of New Year's fireworks, Oleksander Dugyn said he and his friends and family in Kyiv watched the sparks caused by Ukrainian air defence forces countering Russian attacks.

While Russia's bombardments have left many Ukrainians without heating and electricity due to damage or controlled blackouts meant to preserve the remaining power supply, Ukraine's state-owned grid operator said Sunday there would be no restrictions on electricity use for one day.

"The power industry is doing everything possible to ensure that the New Year's holiday is with light, without restrictions," utility company Ukrenergo said.

It said businesses and industry had cut back to allow the additional electricity for households.