Hundreds of hotel guests trapped by flash flooding at Death Valley National Park in the US were able to drive out after crews cleared a pathway through rocks and mud, but roads damaged by floodwaters or choked with debris were expected to remain closed into next week, officials said on Saturday.

The National Park Service said Navy and California Highway Patrol helicopters have been conducting aerial searches in remote areas for stranded vehicles, but had found none.

However, it could take days to assess the damage — the park near near the California-Nevada state line has over 1609 kilometer of roadway across 1.3 million hectares.

No injuries were reported from the record-breaking rains on Friday.

The park weathered 3.71 centimeters of rain at the Furnace Creek area.

That's about 75 per cent of what the area typically gets in a year, and more than has ever been recorded for the entire month of August.

Nikki Jones, a restaurant worker who is living in a hotel with fellow employees, said rain was falling when she left for breakfast on Friday morning.

By the time she returned, rapidly pooling water had reached the room's doorway.

"I couldn't believe it," Jones said. "I hadn't seen water rising that fast in my life."

Fearful the water would come into their ground-floor room, Jones and her friends put their luggage on beds and used towels at the bottom of doorways to keep water from streaming in. 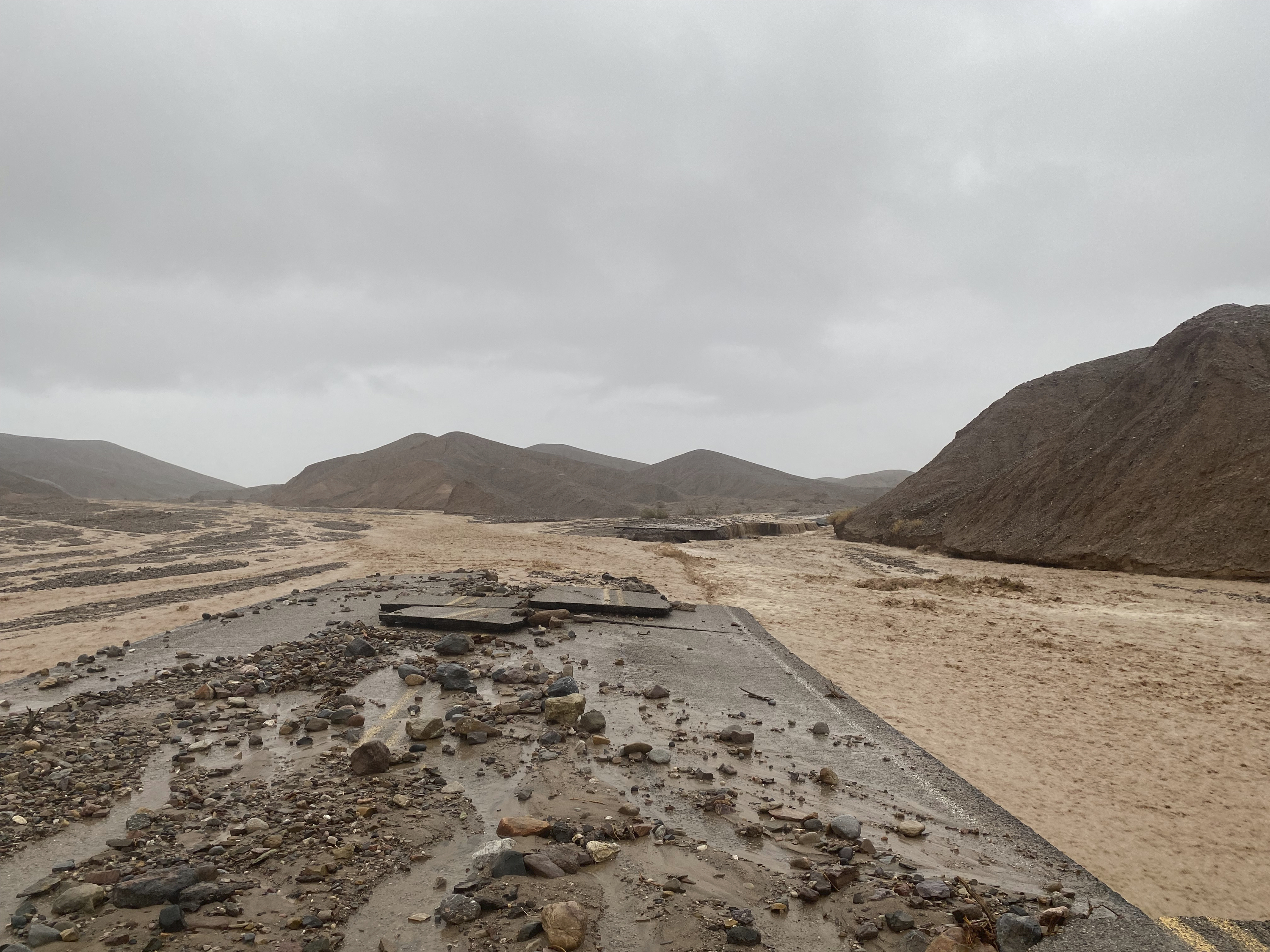 For about two hours, they wondered whether they would get flooded.

"People around me were saying they had never seen anything this bad before — and they have worked here for a while," Jones said.

While their room was spared, five or six other rooms at the hotel were flooded.

Carpet from those rooms was later ripped out.

Most of the rain — just over an inch — came in an epic downpour between 6am and 8am on Friday, said John Adair, a meteorologist with the National Weather Service in Las Vegas.

The flooding "cut off access to and from Death Valley, just washing out roads and producing a lot of debris," Adair said.

Highway 190 — a main artery through the park — is expected to reopen between Furnace Creek and Pahrump, Nevada, by Tuesday, officials said. Park employees also stranded by the closed roads were continuing to shelter in place, except for emergencies, officials said.

"Entire trees and boulders were washing down," said John Sirlin, a photographer for an Arizona-based adventure company who witnessed the flooding as he perched on a hillside boulder, where he was trying to take pictures of lightning as the storm approached.

"The noise from some of the rocks coming down the mountain was just incredible," he said in a phone interview on Friday afternoon.

In most areas water has receded, leaving behind a dense layer of mud and gravel. About 60 vehicles were partially buried in mud and debris.

There were numerous reports of road damage, and residential water lines in the park's Cow Creek area were broken in multiple locations. 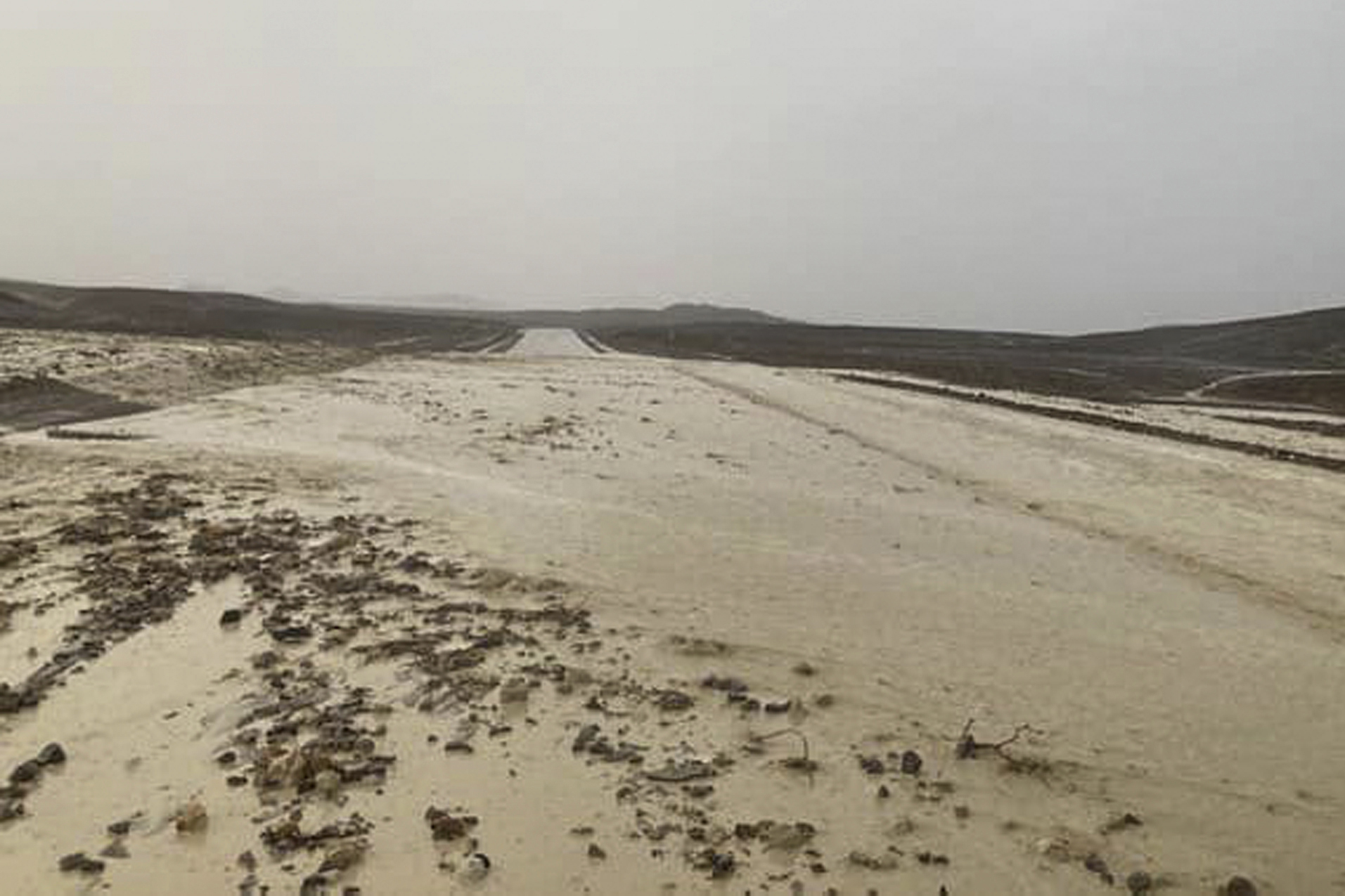 About 20 palm trees fell into the road near one inn, and some staff residences also were damaged.

"With the severity and wide-spread nature of this rainfall it will take time to rebuild and reopen everything," park superintendent Mike Reynolds said in a statement.

The storm followed major flooding earlier this week at the park 193km northwest of Las Vegas.

Some roads were closed on Monday after they were inundated with mud and debris from flash floods that also hit western Nevada and northern Arizona.

Friday's rain started around 2am, according to Sirlin, who lives in Chandler, Arizona, and has been visiting the park since 2016.

"It was more extreme than anything I've seen there," said Sirlin, the lead guide for Incredible Weather Adventures who started chasing storms in Minnesota and the high plains in the 1990s.

"A lot of washes were flowing several feet deep. There are rocks probably 3 or 4 feet covering the road," he said.

Man fighting for life after stabbing outside Sydney shops

Young boy fighting for life after being pulled from Victorian lake