Rents increased at record rate across Australia in 2022: Report In grim news for renters, a new report has revealed Australia has recorded its steepest ever annual increase in rental rates.

The ﻿new Domain Rent Report, released today and covering the final quarter of 2022, showed that rents in the country's capital cities shot up 17.6 per cent for units and 14.6 per cent for houses in 2022.

"Nationally, asking rents are at historic highs across all cities (apart from Darwin and units in Perth), rents are rising at the fastest annual pace ever seen across the combined capitals and the number of vacant rental properties is at an all-time low for the month of December," report author Dr Nicola Powell said.

And she said the situation was likely to continue, with tourism, overseas migration and foreign students putting more pressure on a limited supply of rental properties.

"The highly competitive rental market that we saw last year is going to be amplified as Australia embarks on the busiest period in the rental calendar in January," Powell said.

"Due to a seasonal lift, those on the hunt for a new lease this quarter will find slightly more choice as the rental market moves into its busy changeover period at the start of the new year, freeing up some homes for a short amount of time."﻿ 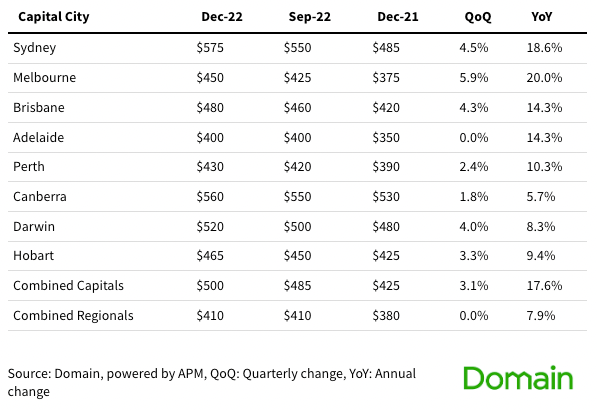 Of the capitals, Perth saw the largest increase in house rental prices year-on-year, rising 15.2 per cent. 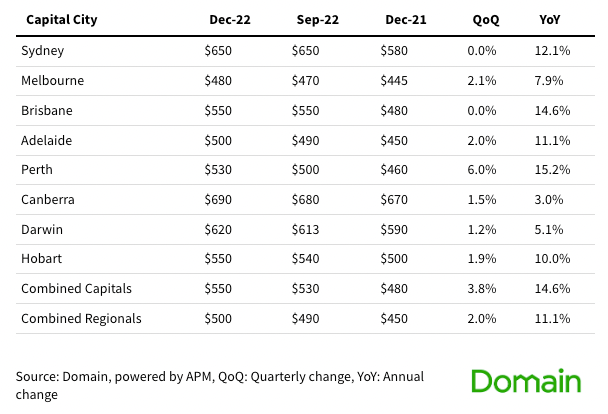 Individual areas saw truly jaw-dropping surges, including a 45.1 per cent rise in Paradise Point, Gold Coast, and a 40.6 rise in Adelaide's Hyde Park.

But it's in units where the pinch is really being felt.

"Amid Australia's cost of living crisis, we predict that units will be a popular option for those looking for a rental this year," Powell said.

"Unit rents have been growing faster quarterly than houses in most capital cities, likely because affordability concerns continue to persist."

"There are many factors that have driven the rental market to its current state and there is no quick fix to ease its highly competitive nature," Powell said.

"The government's commitment to building more housing is a great start but we need to see further progress and a change in land use and planning rules to allow for more homes to be built in middle-ring suburbs.

"With the population increasing, rising investor activity is needed to assist with Australia's limited rental market supply, advancements to the build-to-rent sector and more assistance from the government to help shift more tenants into home ownership.

"Investors should be encouraged to participate in social, community and affordable government housing programs.

"On top of that, seeing meaningful improvements in gross rental yields this quarter will hopefully encourage investor activity helping to address supply issues."

Tatjana Patitz, one of the original '90s supermodels, dies at 56