Police in riot gear on Wednesday moved into a condemned village in western Germany, launching an effort to evict activists holed up at the site in an attempt to prevent its demolition to make way for the expansion of a coal mine.

Some stones and fireworks were thrown as officers entered the tiny hamlet of Luetzerath, which has become a flashpoint of debate over the country's climate efforts, on Wednesday morning.

Police announced that the operation had started and that the area would be fenced off. They said that people "currently have the possibility to leave the site without further police measures". They said they had found "further stored projectiles".

READ MORE: Thousands of flights grounded across US due to computer glitch﻿

Several dozen activists remained camped out in the village, some in tree houses, as police slowly removed further barricades near the entrance in muddy conditions. Some activists read books or played accordion while perched some 3 metres up on tripods.

Police removed dozens of activists from a roadblock. Some went voluntarily, while others were carried away. At least one screamed in apparent pain as officers used force to remove her.

Police then started entering several large farm warehouses, one used as a soup kitchen by squatters, and removed the activists holed up inside.

A few sat or stood on the roofs of Luetzerath's remaining buildings in the chilly wind.

"I'm really afraid today," Petra Mueller, a 53-year-old local who said she had been at the site for a few days, said from a top-floor window of one of the few houses. But she said she held out hope of preserving what's left of Luetzerath "until nothing is left standing; hope dies last."

READ MORE: Couple rescued after being stranded at sea on paddleboards for days﻿ 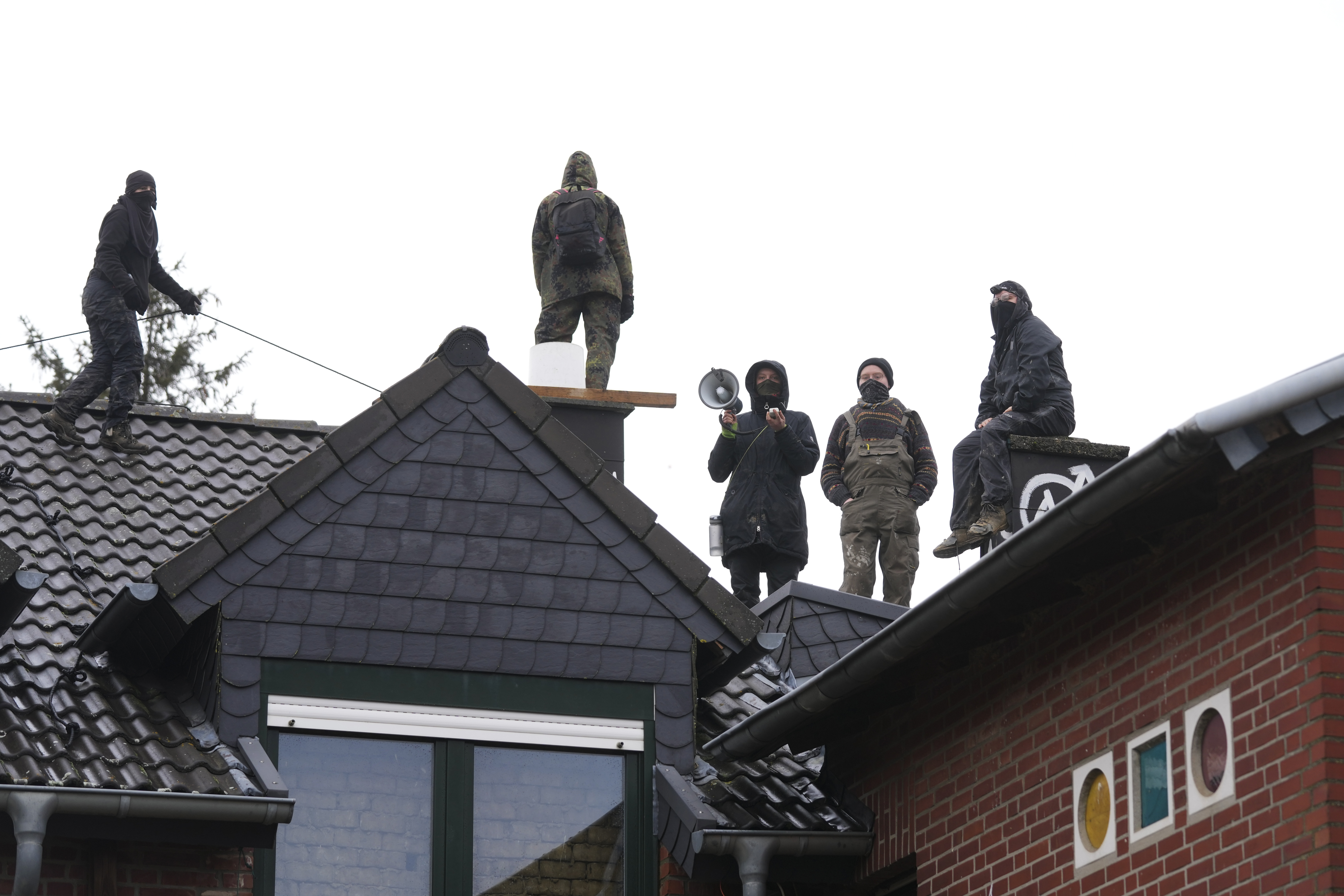 Environmentalists say bulldozing the village to expand the nearby Garzweiler coal mine would result in huge amounts of greenhouse gas emissions. The government and utility company RWE say the coal is needed to ensure Germany's energy security.

On Tuesday, protesters refused to heed a court ruling effectively banning them from the area. Some dug trenches, built barricades and perched atop giant tripods in an effort to stop heavy machines from reaching the village, before police pushed them back by force.

RWE wants to extract the coal beneath Luetzerath, which it says is necessary to ensure energy security in Germany. The company reached a deal with the regional government last year that allows the village to be destroyed in return for ending coal use by 2030, rather than 2038. 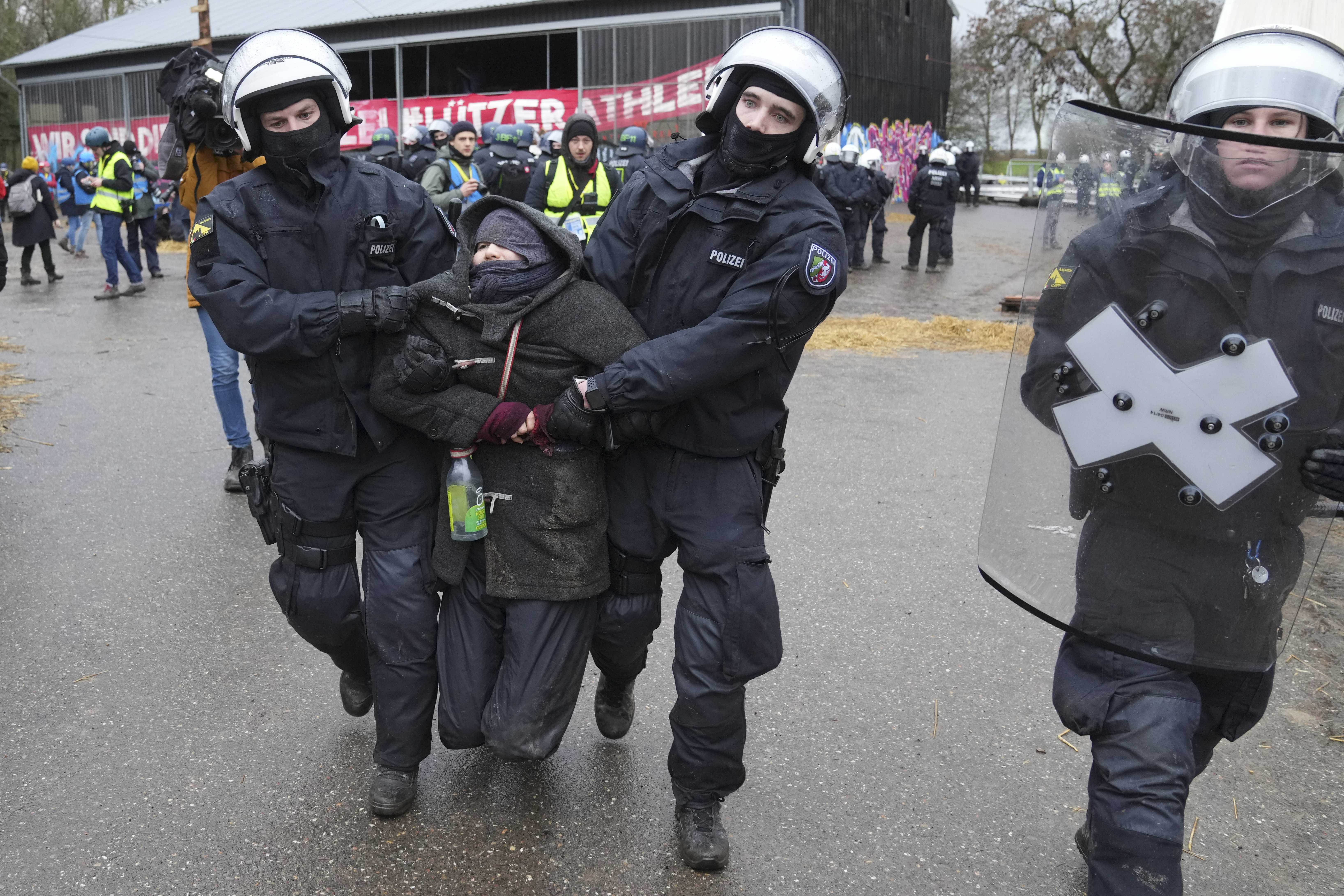 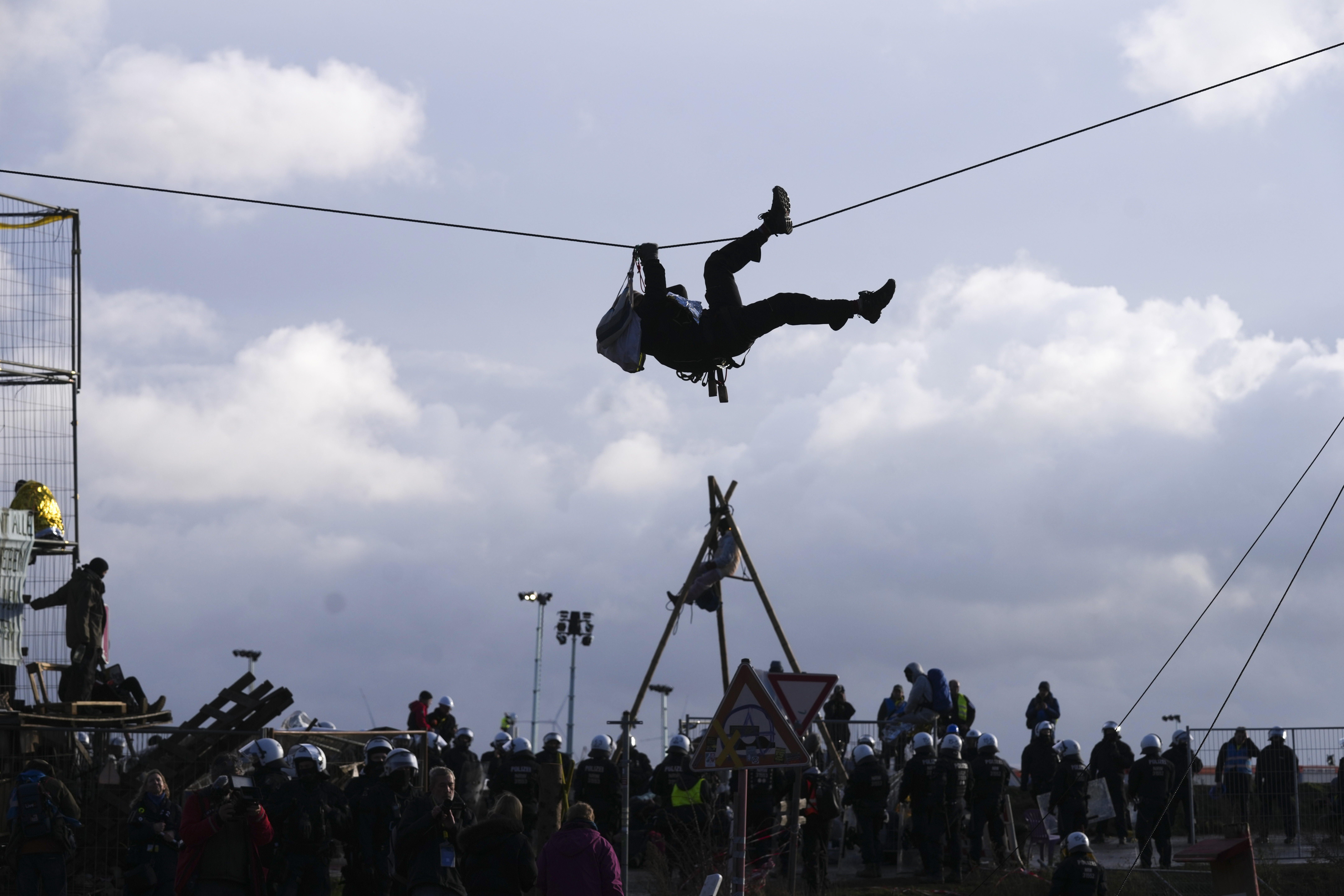 The environmentalist Green party are part of both the regional and national governments. Vice Chancellor Robert Habeck, a Green who is Germany's economy and climate minister, defended that agreement as "a good decision for climate protection" that fulfils many of the environmentalists' demands and saves five other villages from demolition.

"I think climate protection and protests need symbols but the empty hamlet of Luetzerath, where no one lives any more, is the wrong symbol from my point of view," Habeck told reporters in Berlin.

But climate campaigners say the agreement to expand the massive open-cast mine goes against Germany's international commitments to reduce emissions of planet-warming greenhouse gases. They also cite studies suggesting the coal beneath Luetzerath may never be needed. 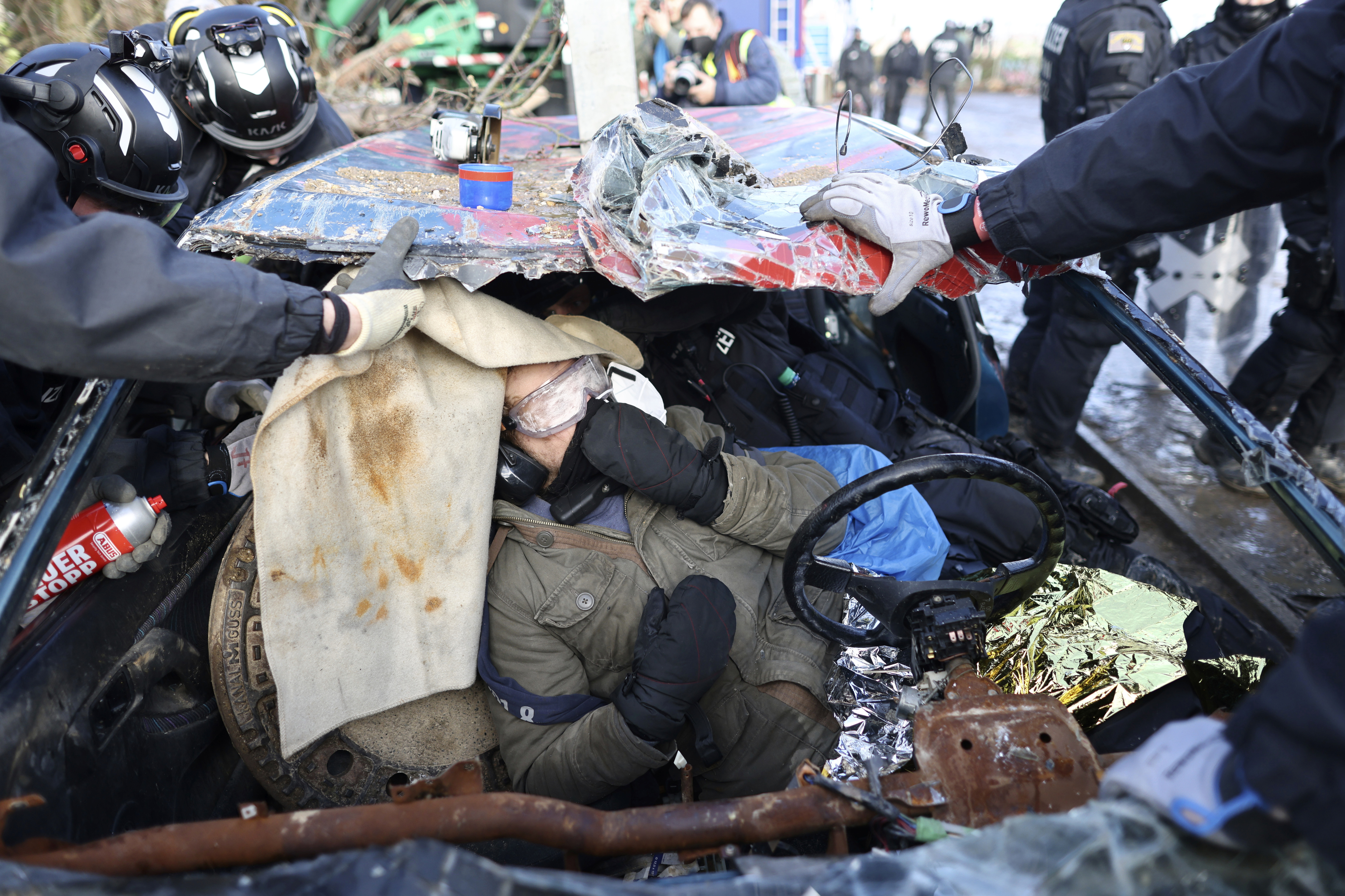 Luetzerath "is now the European place of crystallisation for the climate movement," said Lakshmi Thevasagayam, a spokeswoman for the Luetzerath Lives activist group. "We are standing against RWE making a meter of progress with its diggers, because we know that the coal under Luetzerath isn't needed for energy security — it must remain in the ground so that we can achieve climate justice."

"Now we can do something against the climate catastrophe, but at some point we won't be able to any more," Thevasagayam said. She asserted that there had been "a complete escalation" on the part of police.

The head of the Deutsche Polizeigewerkschaft police union's regional branch, Erich Rettinghaus, said that police were proceeding "very prudently" and were giving demonstrators every possibility to demonstrate peacefully. But he said that there was concern about trouble because potentially violent demonstrators from across Europe had gathered at the site in recent days. 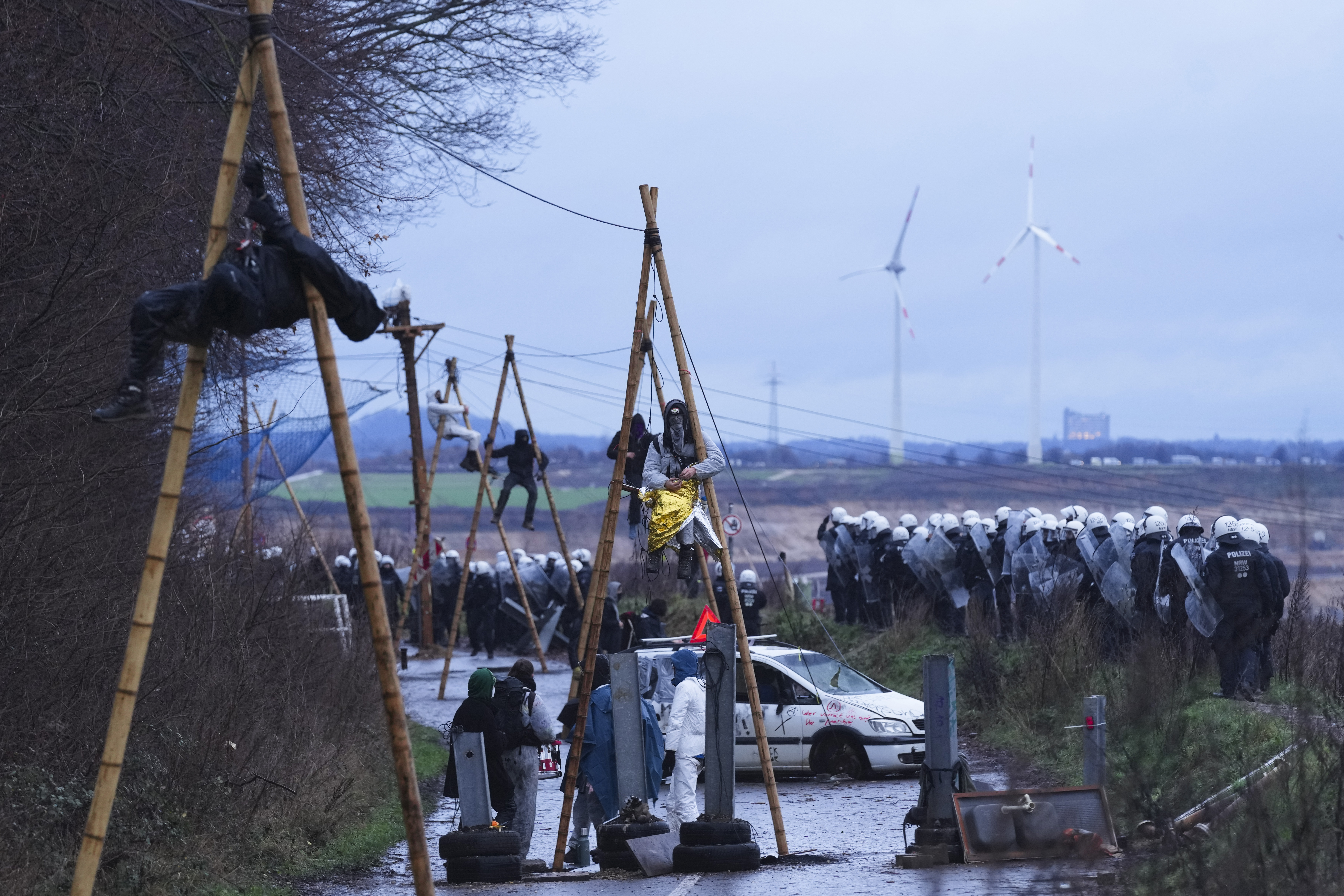 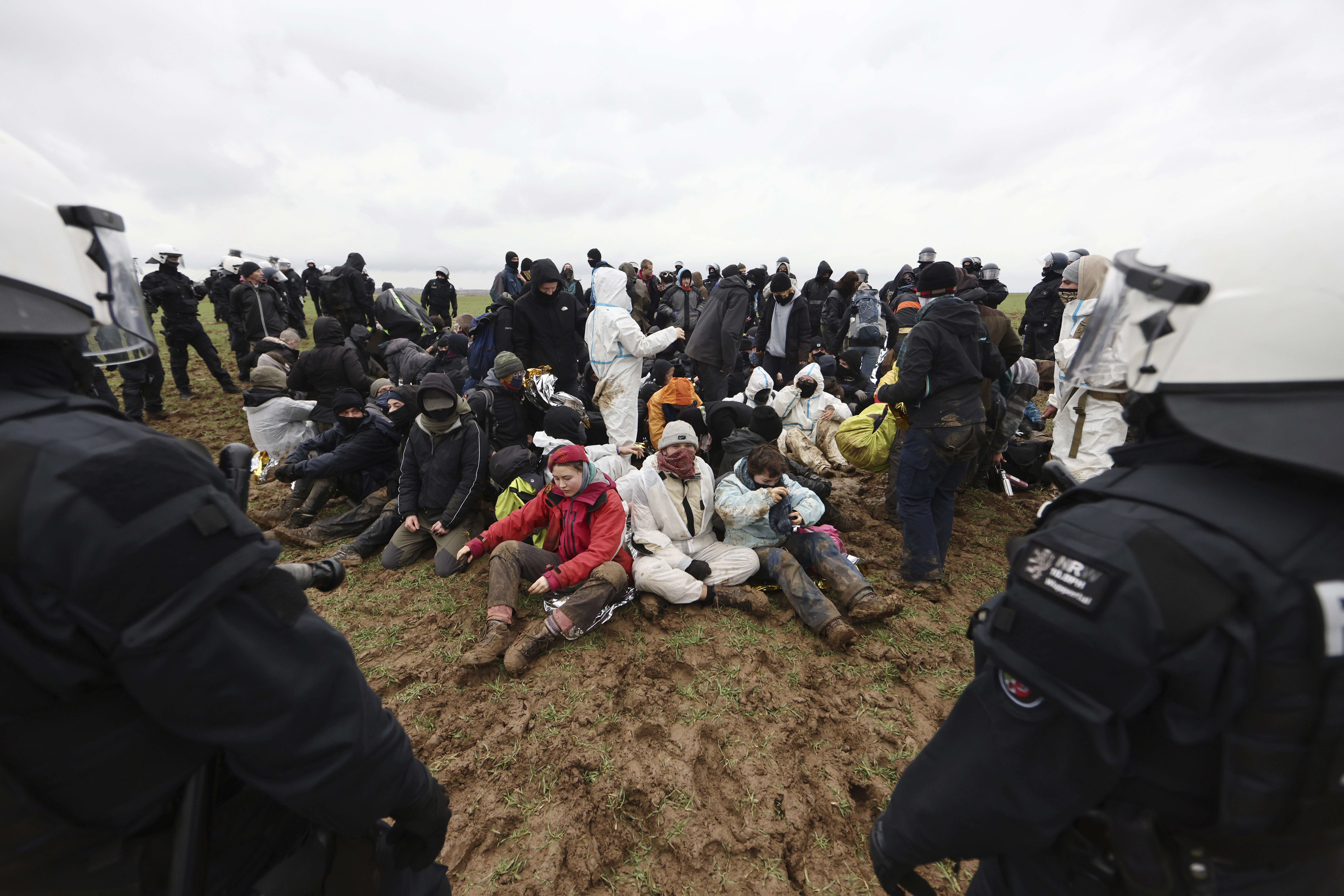 RWE said in a statement that a 1.5-kilometre fence will be built around the site as one of the first measures. It appealed to protesters to "end the illegal occupation" of the site that legally belongs to it peacefully.

Habeck said that there appeared to have been some scuffles "but no escalation yet," and appealed to all concerned to "leave it at that."

Northern California sees more rain while the south dries out