Mexican security forces have captured Ovidio Guzmán, an alleged drug trafficker wanted by the United States and one of the sons of former Sinaloa cartel boss Joaquín "El Chapo" Guzmán.

The pre-dawn operation on Thursday set off gunfights and roadblocks across the western state's capital.

Defence Secretary Luis Cresencio Sandoval said Army and National Guard personnel had captured a son of "El Chapo", identifying him only as Ovidio, in keeping with government policy.

Ovidio Guzmán, nicknamed "the Mouse", had not been one of El Chapo's better-known sons until an aborted operation to capture him three years ago.

That attempt similarly set off violence in Culiacan that ultimately led President Andrés Manuel López Obrador to order the military to let him go.

Drug trafficking, along with immigration, is expected to be a top talking point. 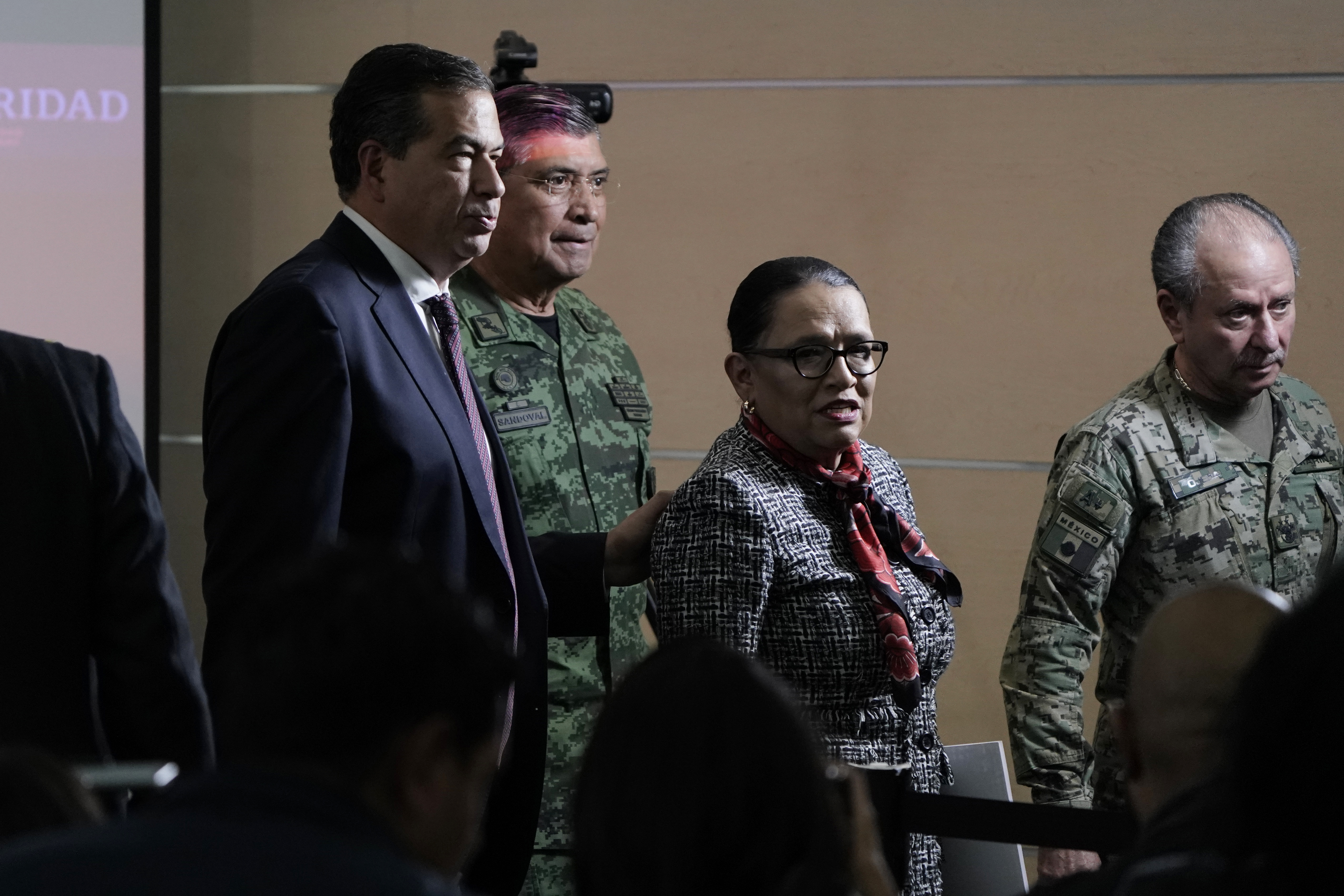 "This is a significant blow to the Sinaloa cartel and major victory for the rule of law. It will not, however, impede the flow of drugs into the US. Hopefully, Mexico will extradite him to the US," Mike Vigil, the DEA's former chief of international operations, said on Thursday.

Vigil said Ovidio Guzmán was involved in all of the cartel's activities, especially the production of fentanyl.

A 2018 federal indictment in Washington, DC, accused the younger Guzmán of conspiring to distribute cocaine, methamphetamine and marijuana in the United States.

The CDC said last July that more than 107,000 Americans had died from a drug overdose during the year ending January 2022, most of them involving opioids including illegally made fentanyl. 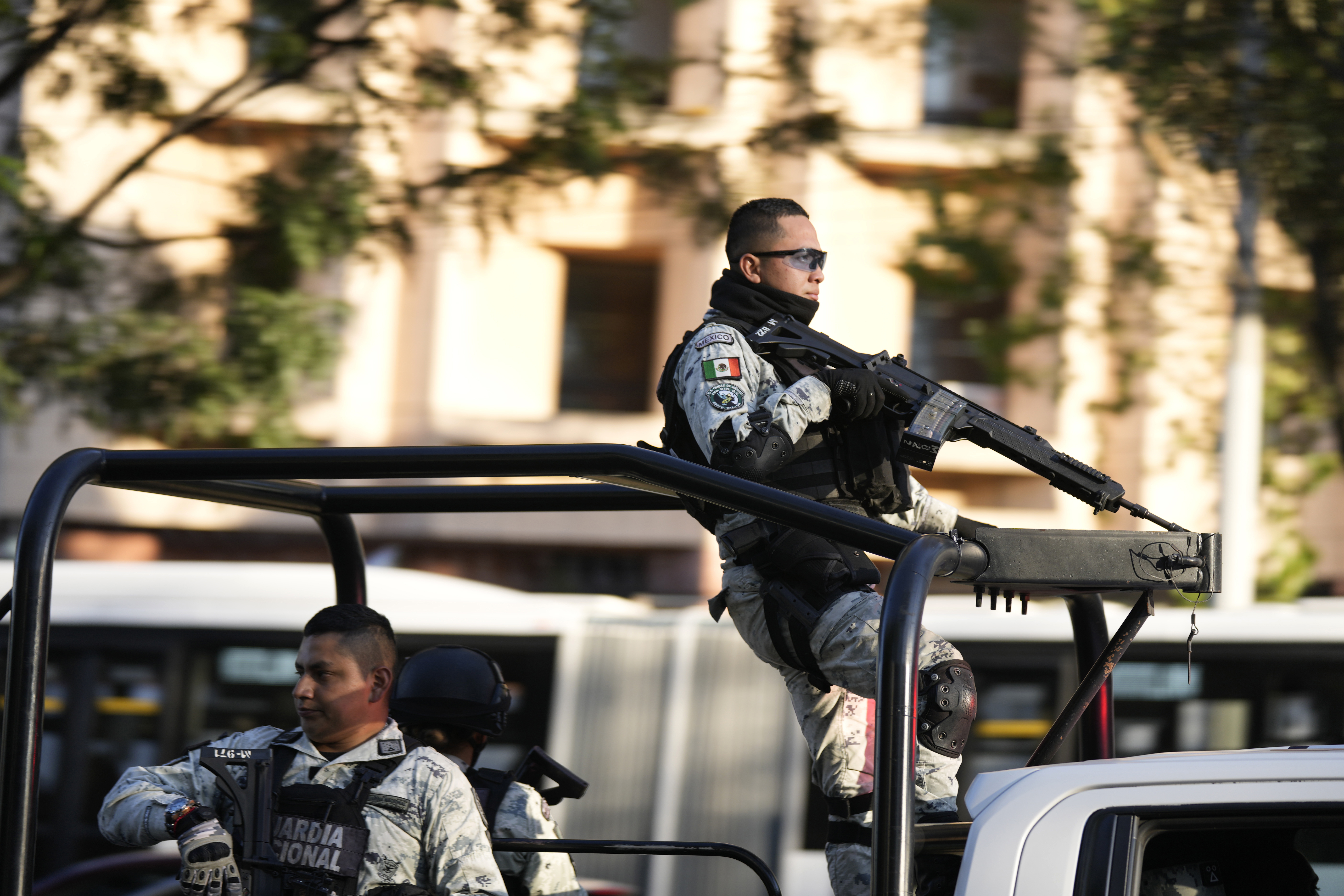 López Obrador's security approach reversed years of what came to be known as the kingpin strategy of taking down cartel leaders, which led to the fragmentation of large cartels and bloody battles for dominance.

López Obrador put all his faith in the military, disbanding the corrupt Federal Police and creating the National Guard under military command.

The capture was the result of six months of reconnaissance and surveillance in the cartel's territory, and then quick action on Thursday, Sandoval said.

National Guard troops spotted SUVs, some with homemade armour, and immediately coordinated with the army as they established a perimeter around the suspicious vehicles and forced the occupants out to be searched.

The security forces then came under fire, but were able to gain control of the situation and identify Guzmán among those present and in possession of firearms, Sandoval said. 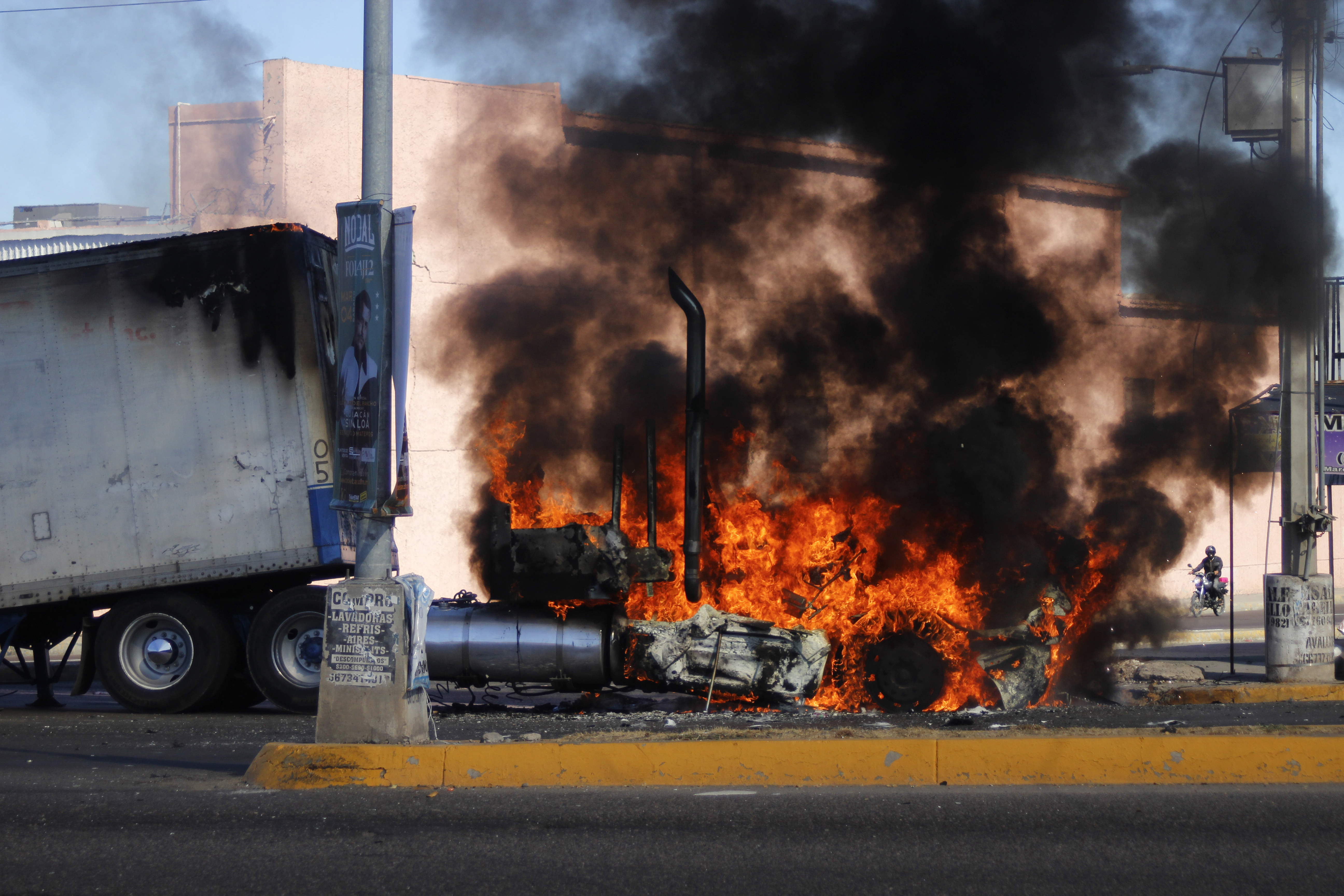 Cartel members set up 19 roadblocks including at Culiacan's airport and outside the local army base, as well as all points of access to the city of Culiacan, Sandoval said, but the Air Force was able to fly Guzmán to Mexico City despite their efforts, and he was taken to offices of the attorney general's organised crime special prosecutor.

Sandoval said Guzmán was a leader of a Sinaloa faction he called "los menores" or "the juniors", who are also known as "los Chapitos", for the sons of El Chapo.

Other "little Chapos" include two of his brothers — Iván Archivaldo Guzmán and Jesús Alfredo Guzmán — who are believed to have been running cartel operations together with Ismael "El Mayo" Zambada. 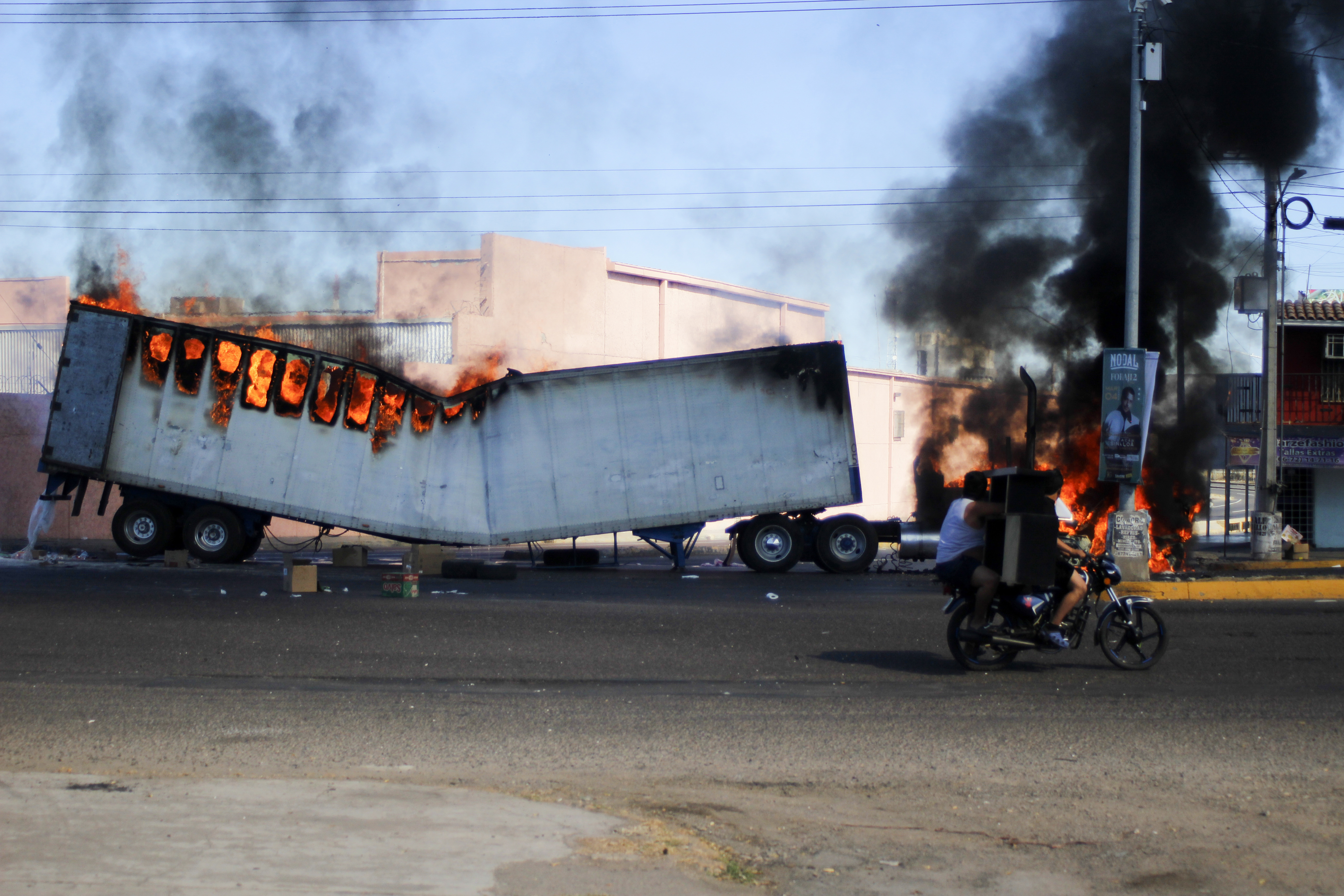 The Chapitos have been taking greater control in the cartel because Zambada was in poor health and isolated in the mountains, Vigil said.

"The Chapitos know that if El Mayo dies, (the cartel) is going to break apart if they don't have control," he said.

"It's going to be very important that the US requests Ovidio's extradition quickly and that Mexico does it."

US Homeland Security Investigations had posted a $US5 million ($7.4 million) reward for information leading to the arrest and/or conviction of Guzmán early last year.

Alleged cartel members responded to Thursday's operation by carjacking Culiacan residents and setting vehicles ablaze in the cartel stronghold. Local and state authorities warned everyone to stay inside.

Intermittent gunfire continued into the afternoon on Thursday (Friday AEDT) in Culiacan as Mexican security forces continued to clash with cartel gunmen and few people ventured out. Airports there and in several other Sinaloa cities remained closed. 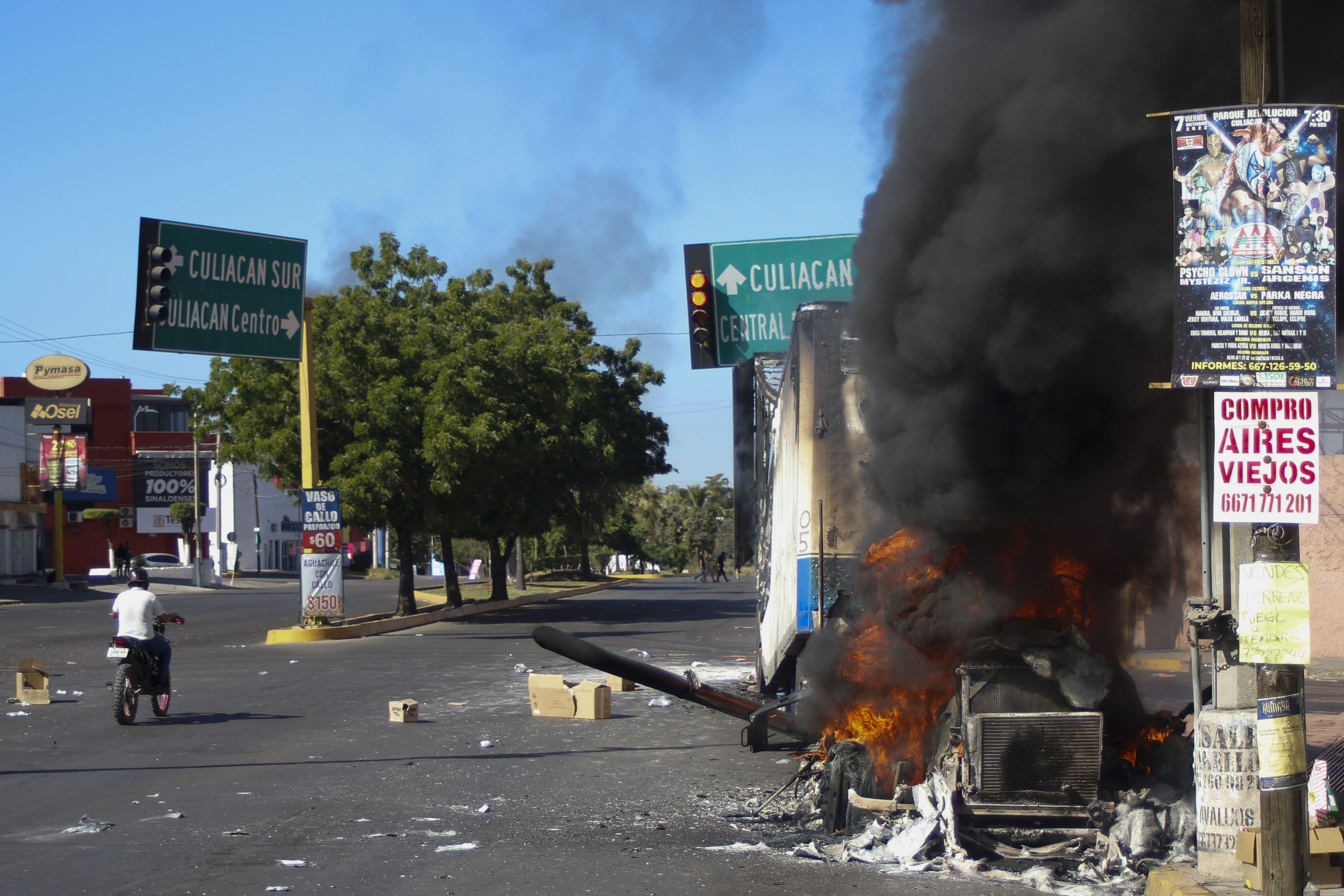 Airline Aeromexico said in a statement that one of its jets was struck by a bullet on Thursday morning as it prepared for takeoff.

Passenger video posted online showed people cowering on the floor of the plane.

The company said passengers and crew were safe.

Later, Mexico's Civil Aviation Agency said in a statement that an air force plane in Culiacan had also been hit with gunfire.

In addition to the Culiacan airport, the agency said airports in Los Mochis and Mazatlan were also ordered closed and all flights cancelled for security reasons.

David Téllez was aboard that flight with his wife and children, preparing to return to Mexico City after visiting his in-laws. 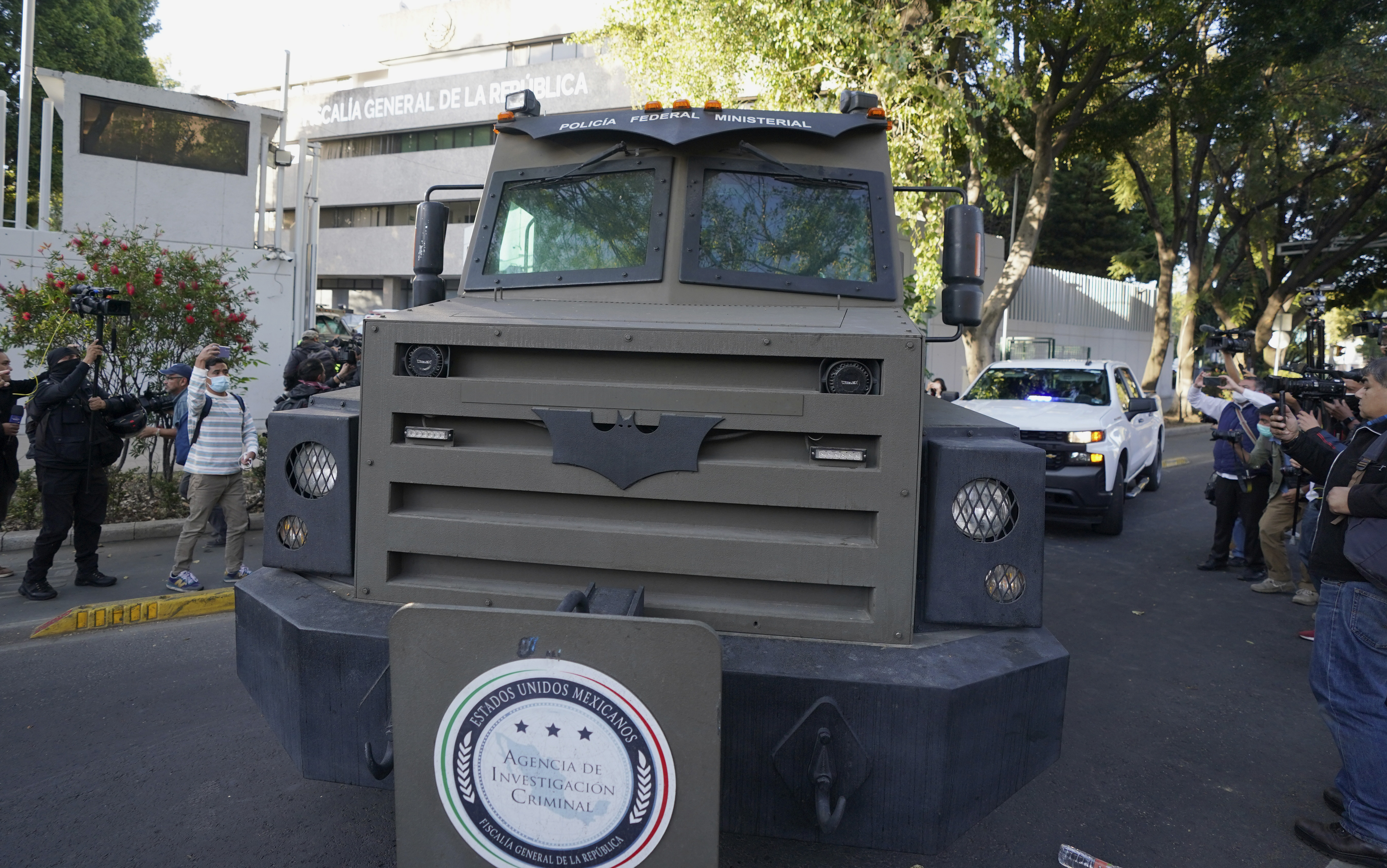 Their plane had been waiting for its chance to take off as two large military planes carrying personnel landed as well as three or four military helicopters.

Marines and soldiers deployed along the perimeter of the runway.

When the commercial flight was finally preparing to accelerate, Téllez heard gunshots in the distance.

Within 15 seconds the sounds were suddenly more intense.

"We heard gunshots and threw ourselves to the floor," he said.

He did not know the plane had been hit until a flight attendant told them.

The plane quickly returned to the terminal and they were hustled into a room.

Late Thursday afternoon they were still in the airport, unsure of when they would be able to return to Mexico City.

Elsewhere in Culiacan, local reporter Marcos Vizcarra had sought shelter in a hotel after gunmen stole his car.

Then he explained via Twitter that armed men had entered the hotel where he had sought shelter "and are threatening guests to give them their car keys".

Later, Vizcarra reported that they had taken his phone, but he had made it home safely.

Such attempts to create chaos often come in response to arrests of important cartel figures in Mexico.

One of the most notorious came when federal security forces cornered Ovidio Guzmán in October 2019, only to let him escape after gunmen shot up the city with high-powered weapons.

López Obrador said at the time he had made the decision to avoid the loss of life.

He embraced the phrase "hugs, not bullets" to describe his approach to Mexico's chronic violence, which would focus on social programs aimed at weakening the draw of organised crime.

But four years into his six-year term, the death toll remains high.

In July, Mexico captured Rafael Caro Quintero, once one of the godfathers of drug trafficking and the man allegedly responsible for the murder of a DEA agent more than three decades ago, just days after López Obrador met with Biden at the White House.

At the time, the capture was seen as a signal that Mexico could be willing to go after high-profile cartel bosses again, something López Obrador had been loathe to do.

GN chats with a CEO – Alison Leighton, City of Melbourne