Northern California sees more rain while the south dries out Storm-ravaged California scrambled to clean up and repair widespread damage on Wednesday as the lashing rain eased in many areas, although thunderstorms led a new atmospheric river into the northern half of the state.

The plume of moisture lurking off the coast stretched all the way over the Pacific to Hawaii, making it "a true Pineapple Express," the National Weather Service said.

Its rains were expected to impact only impact Northern California, giving the south a break until more wet weather arrives by the weekend. At least 17 people have died in the storms battering the state. The figure is likely to rise, Gov. Gavin Newsom said Tuesday during a visit to the scenic town of Capitola on the Santa Cruz coast that was hard hit by high surf and flooding creek waters last week.

A pickup truck driver and a motorcyclist were killed early Tuesday in the San Joaquin Valley when a tree that had been struck by lightning fell on them, authorities said.

More than half of California's 58 counties were declared disaster areas, the governor said. 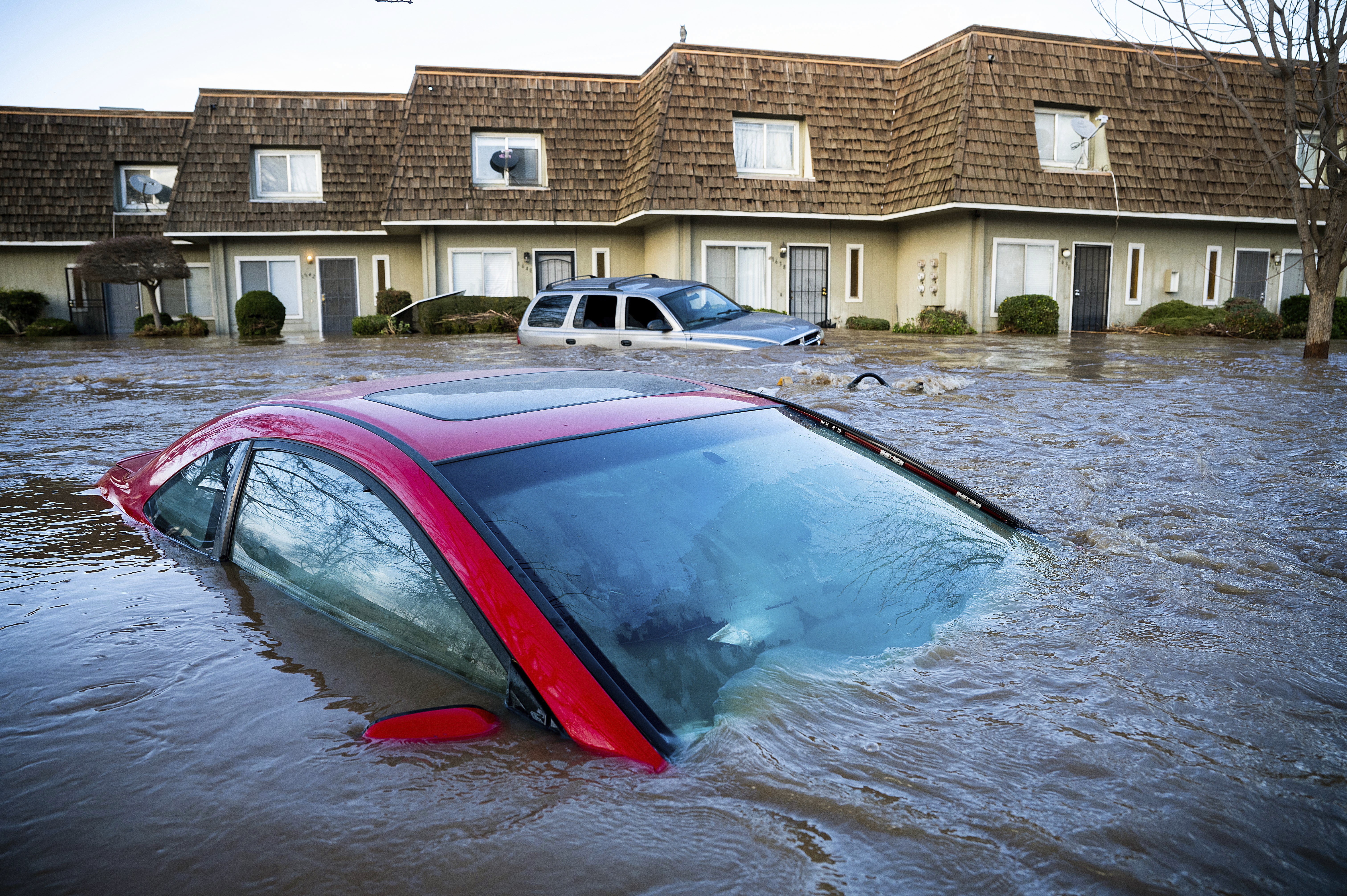 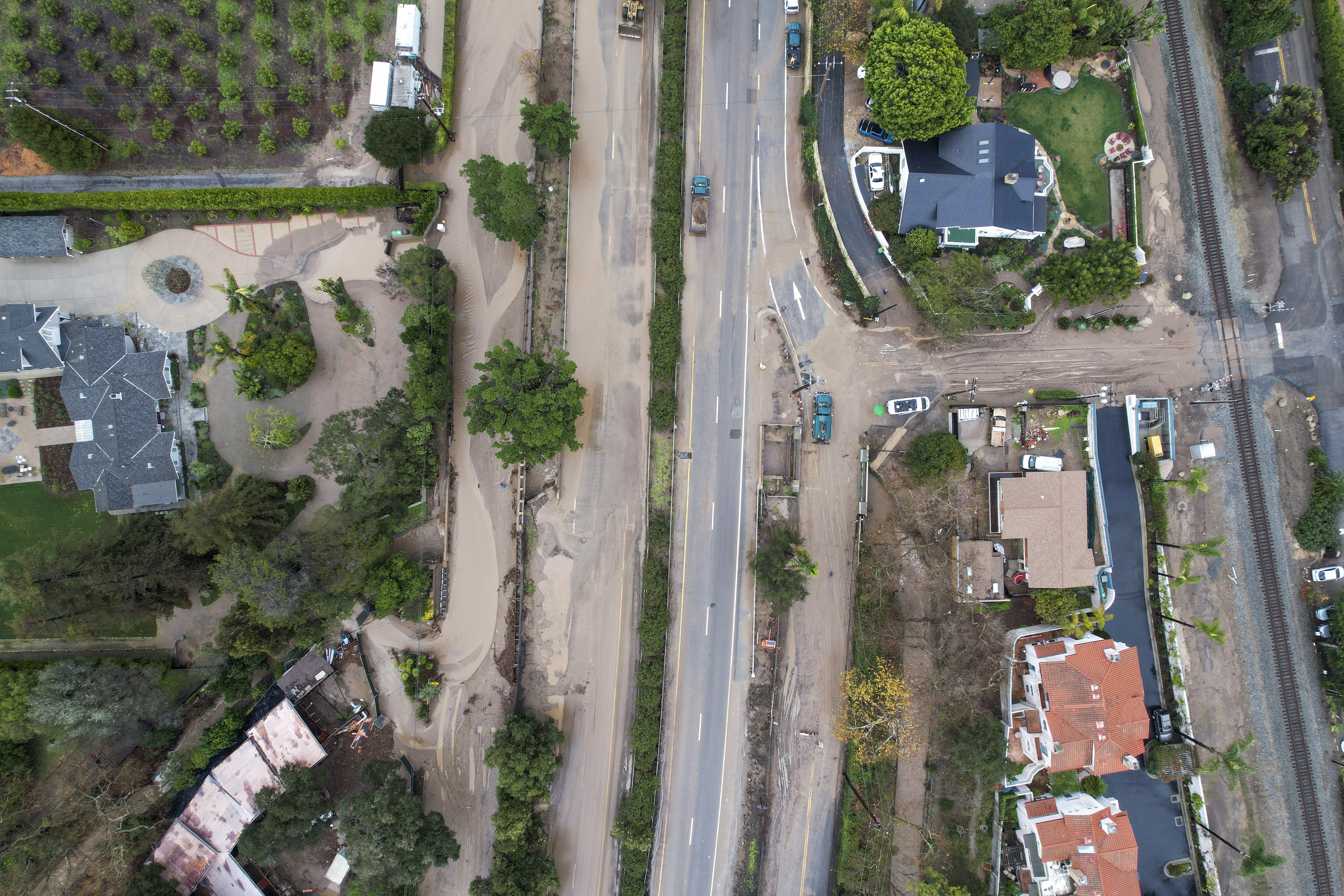 The previous storm that began Monday was one in a series that began late last month and repairing the damage may cost more than $US1 billion ($1.5 billion), said Adam Smith, a disaster expert with the National Oceanic and Atmospheric Administration, the Los Angeles Times reported.

Crews worked to reopen major highways that were closed by rockslides, swamped by flooding or smothered with mud while more than 10,000 people who were ordered out of seaside towns on the central coast were allowed to return home.

They included Montecito, a wealthy Santa Barbara County community that is home to Prince Harry and other celebrities where 23 people died and more than 100 homes were destroyed in a mudslide five years ago. 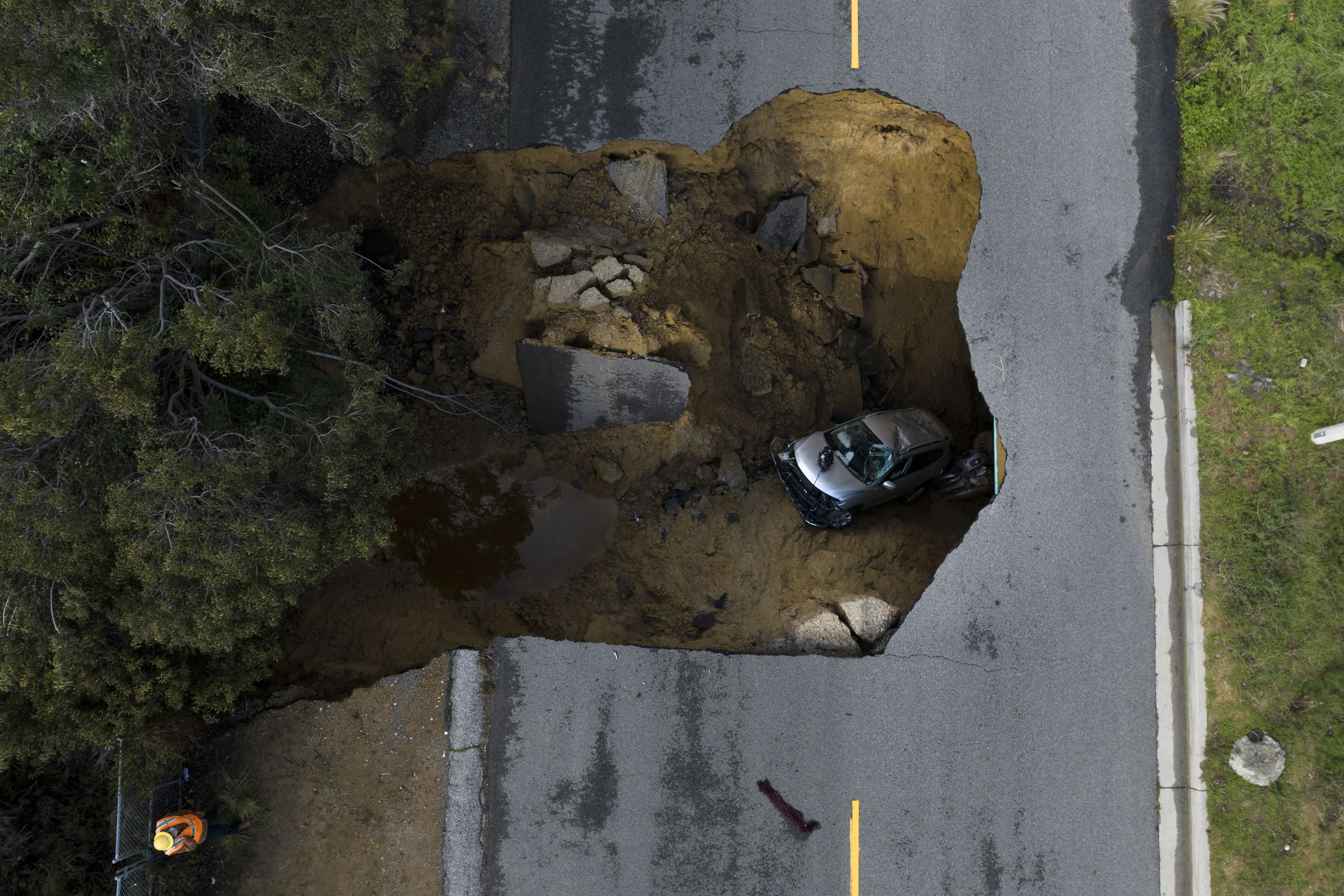 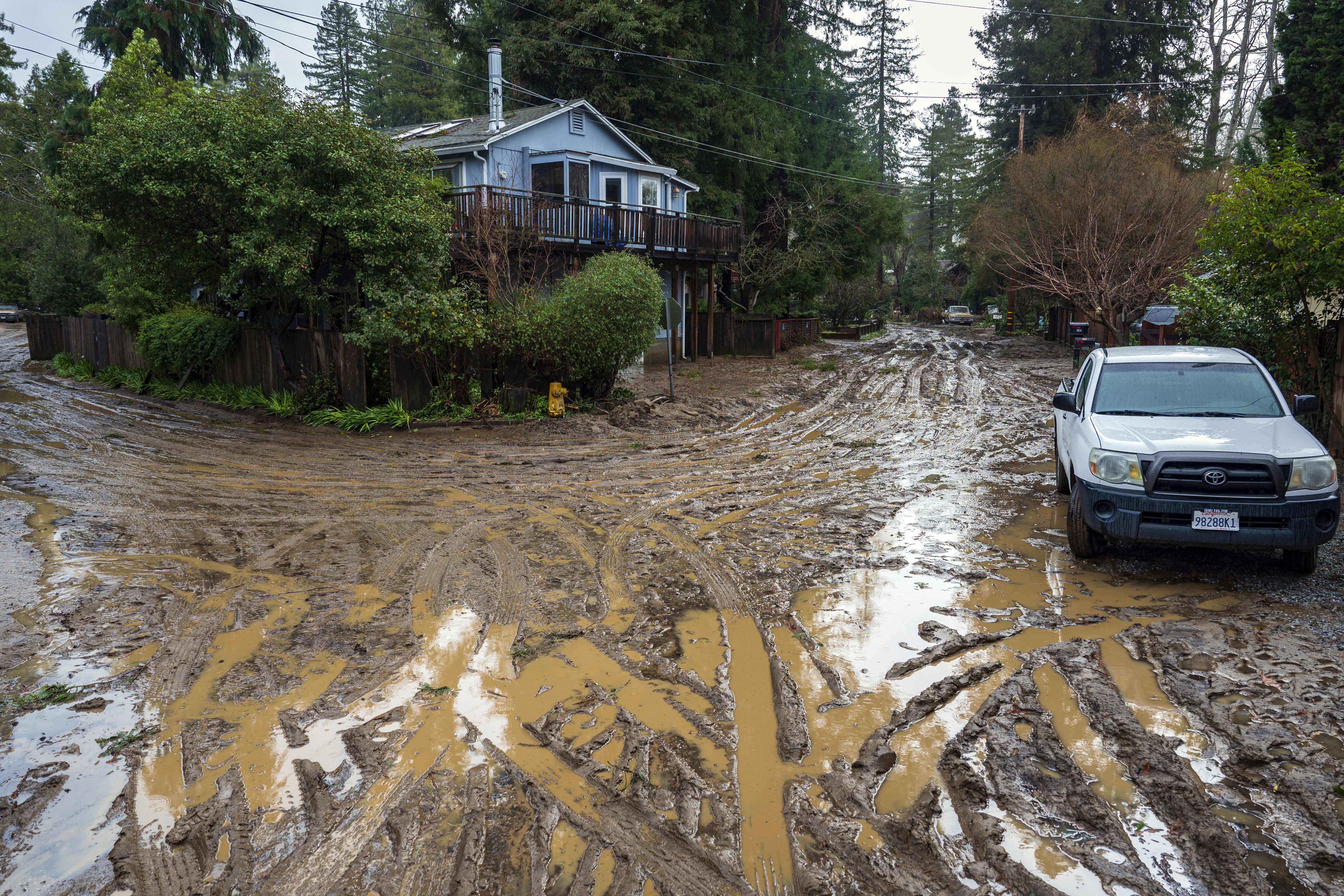 Yet thousands of people living near rain-swollen creeks and rivers remained under evacuation orders. In the San Joaquin Valley, raging waters from Bear Creek flooded parts of the city of Merced and neighboring Planada, a small agricultural community along a highway leading to Yosemite National Park.

All 4000 residents of Planada were ordered to leave Tuesday morning. Neighborhoods were under water with cars submerged up to their roofs. Residents ordered to evacuate carried whatever they could salvage on their backs as they left in the rain.

Other evacuations were ordered because of levee breaches in parts of Monterey County. 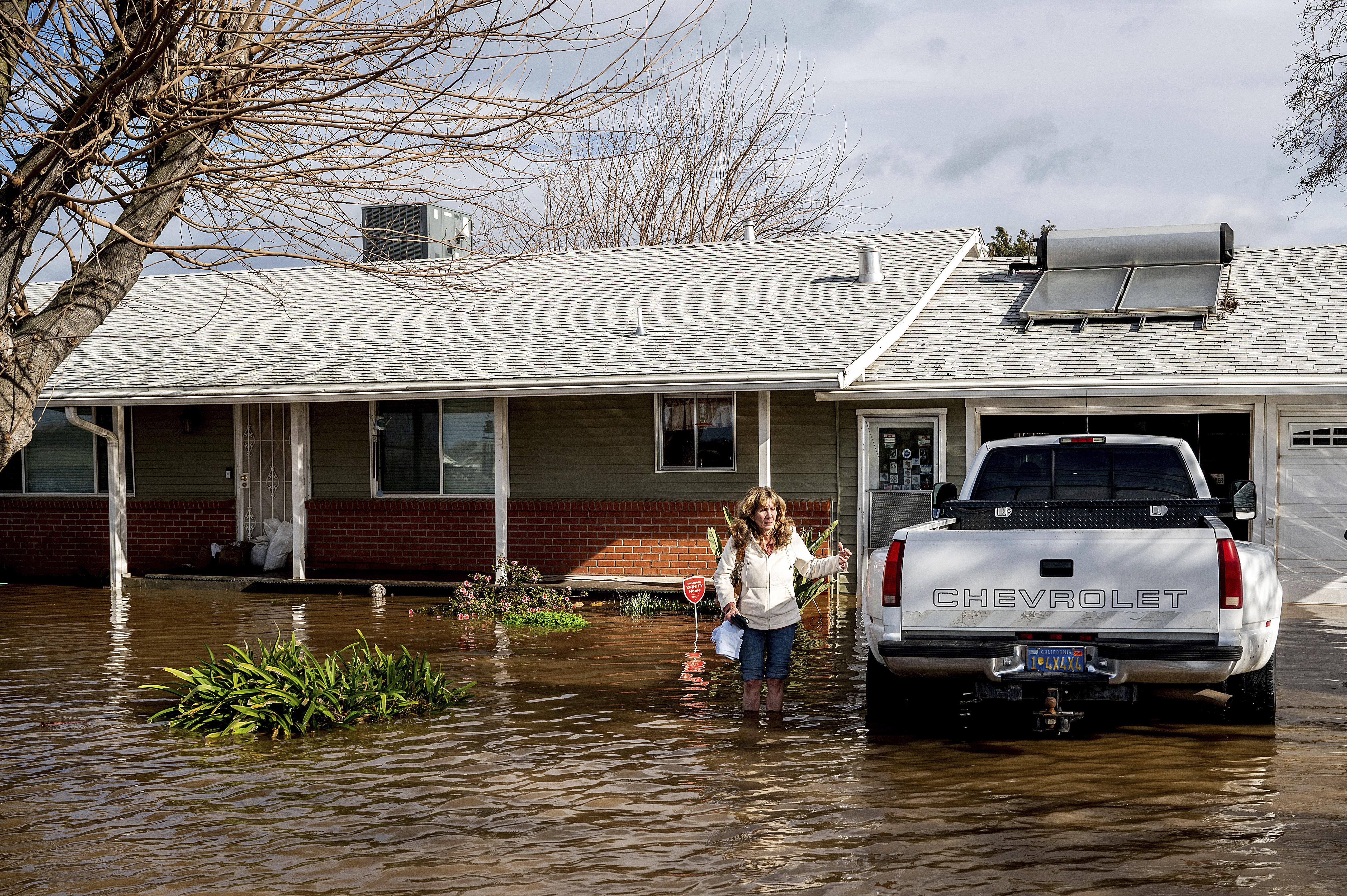 Despite the rain, most of the state remained in extreme or severe drought, according to the US Drought Monitor.

The storms may help locally "but will not resolve the long-term drought challenges," said Rick Spinrad, administrator of the National Oceanic and Atmospheric Administration.

Many areas saw unprecedented amounts of rain coupled with furious winds and even hail and lightning that knocked down trees and damaged electrical lines. More than 75,000 homes and businesses around the state were without power as of late Tuesday night, according to the website Poweroutage.us.

Mudslides damaged some homes in pricey Los Angeles hillside areas, while further up the coast a sinkhole damaged 15 homes in the rural Santa Barbara County community of Orcutt.

Kevin Costner, best-actor winner in a television drama series for "Yellowstone," was unable to attend Tuesday's Golden Globe awards in Los Angeles because of the weather. Presenter Regina Hall said he was sheltering in place in Santa Barbara due to flooding.

In San Francisco, a tree fell on a commuter bus on Tuesday without causing injuries and lightning struck the city's iconic Transamerica Pyramid building without damage. High winds also ripped away part of the roof on a large apartment building. 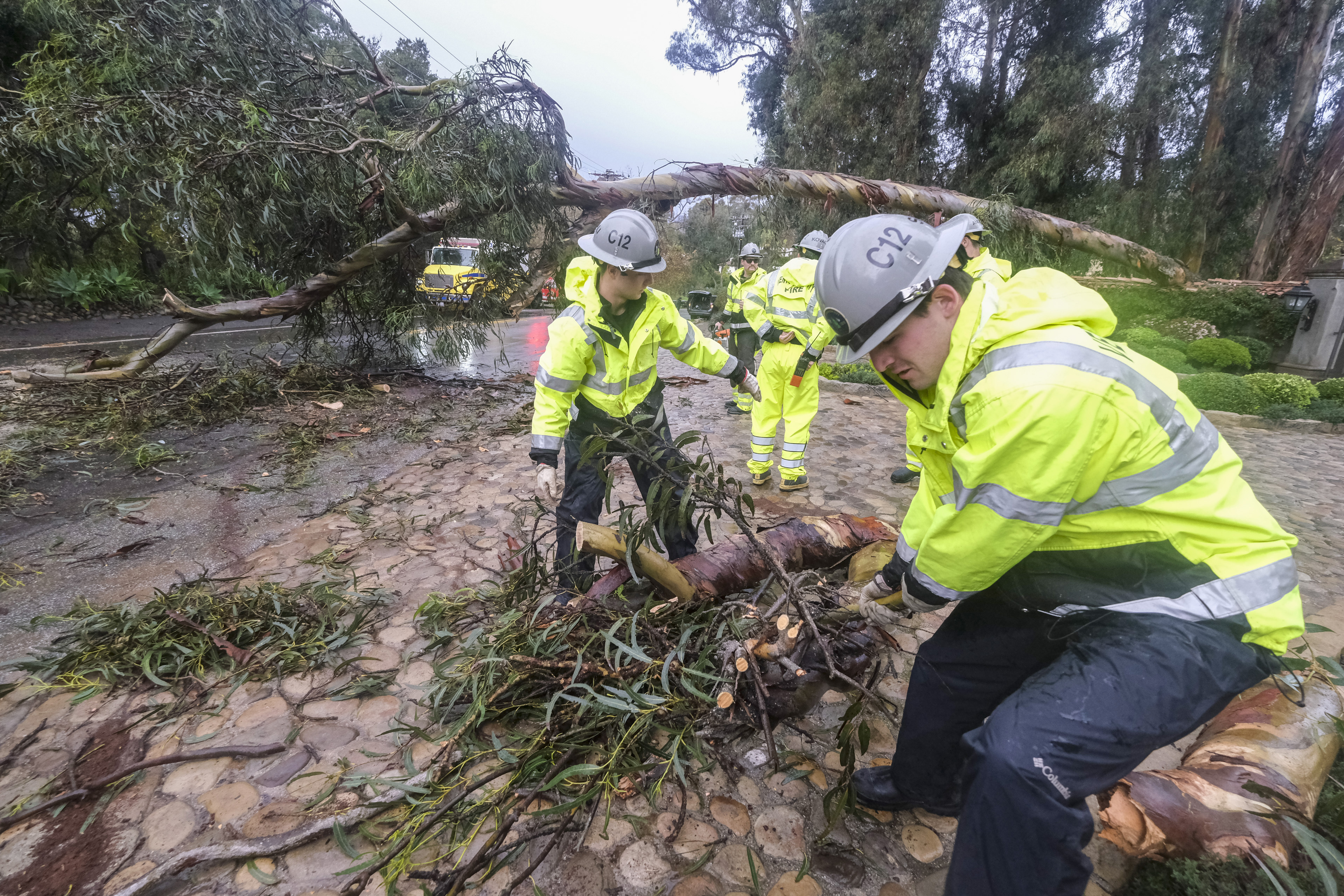 Some people found themselves stranded in small communities inundated with water and mud.

"We're all stuck out here," Brian Briggs said, describing a scary night during which the deluge unleashed mudslides in remote Matilija Canyon that buried one house and cut off the only road to nearby Ojai.

The canyon creek began to flood yards and the surrounding hills, which were stripped of vegetation in the 2017 Thomas Fire, began to tumble down in the dark.

Mudflows dragged sheds, gazebos and outhouses into the creek, Briggs said. After helping neighbors get to higher ground, he returned home to find his fence destroyed by waist-deep mud.

A helicopter dropped 10 sheriff's deputies Tuesday to help the residents of dozens of canyon homes. 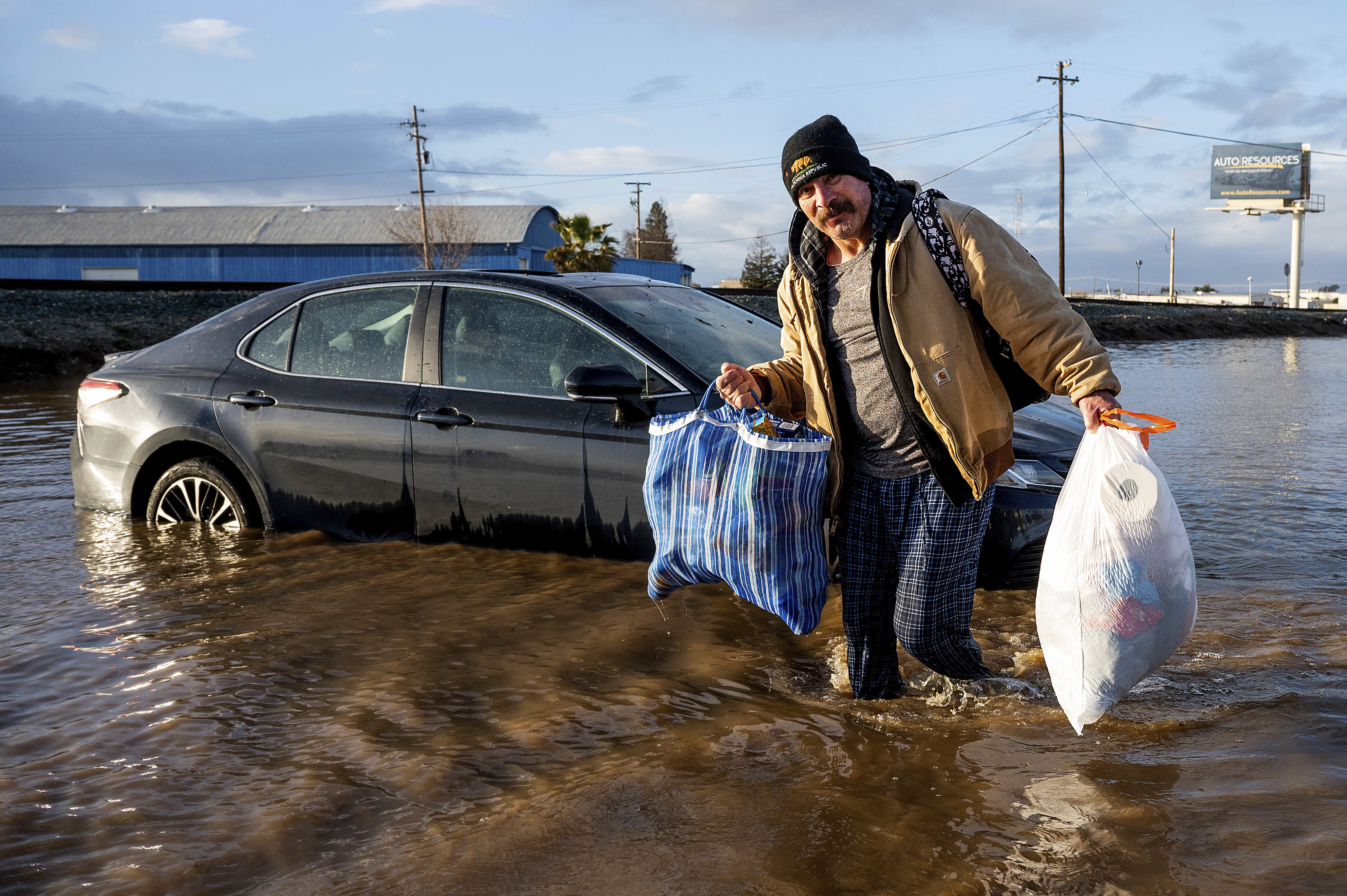 The wet and blustery weather left California's large homeless population in a precarious situation. At least two homeless people in Sacramento County died and more than a dozen people were rescued from a homeless encampment on the Ventura River.

Theo Harris, who has lived on San Francisco's streets since 2016, fortified his shelter with tarps and zip ties Tuesday and took in his girlfriend after her tent flooded.