New images have been released as police hunt two armed men who robbed a service station in Melbourne earlier this month.

Two men entered the station on Ballarat Road, Maidstone, at about 10.10pm on January 4.

They approached the attendant and jumped the service counter.

One man carried what appeared to be a handgun, while the other had a large kitchen knife and threatened the attendant.

They demanded cash and cigarettes before filling a bag with cigarettes and vapes.﻿

They were last seen fleeing on foot southward on Whittaker Street.

One of the men is described as being of Caucasian appearance, with a dark hood pulled tight over his head, wearing a high-vis yellow shirt, and about 20 to 25 years old. 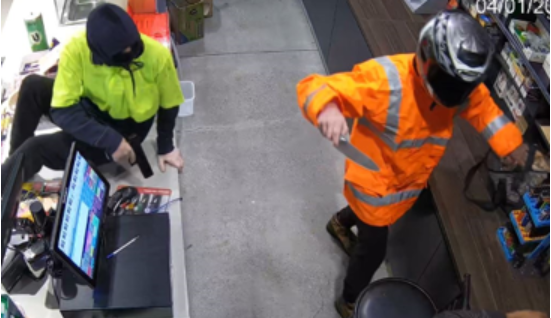 He was brandishing a firearm and carrying a see-through satchel bag.

The second man is described as being of Caucasian appearance with a motorcycle helmet covering his face, wearing a high-vis orange jacket, and about 20 to 25 years old.

He was carrying a large kitchen knife and a backpack.