Growing hole in ozone layer stoked fears of cancer and crop die-offs - but what happened to it?

A growing hole in the ozone layer stoked fears of cancer, cataracts and food production slowing from crop damage when the "shocking" discovery was made in the 1980s.

The thinning of the ozone layer over Antarctica was something ﻿Australians of all ages had heard about as action was being taken in the '80s and '90s, but that's not so much the case now.

The projections of destruction to humankind and our natural world galvanised a global reaction to reverse the process and it's been effective. Slow, but effective.

Explained: The explosive truth about 'supervolcanoes'

Paul Krummel has worked for the Commonwealth Scientific and Industrial Research Organisation (CSIRO) since ﻿1990 and is an expert in atmospheric composition and ozone depletion.

He told 9news.com.au repair to the ozone hole was "definitely on track" but the chemicals that did the damage could linger for hundreds of years.

"It's been slowly getting better," Krummel said.

He explained what happened to the once "significant" damage over the last few decades, and how.

Explained: How severe are tropical cyclones in Australia?﻿

What is the ozone hole and what happened to it?

First, you need to know the "hole" is not a physical gap where no ozone is present, but rather a region of exceptionally depleted ozone in the stratosphere over the Antarctic.

﻿"What a lot of people don't know is that the hole forms in the stratosphere over the Southern Hemisphere in spring and usually recovers by mid-to-late September," he said.

﻿"But the problem is that these chemicals that we've released, the chlorofluorocarbons (CFCs) in particular, some of those have lifetimes of hundreds of years – which means they're going to be in the atmosphere for a very long time."

He attributed the recovery "quite literally" ﻿to the Montreal Protocol, a landmark environmental agreement made in 1987 to formalise a global mission to repair and protect the ozone layer by cutting the use of harmful chemicals being used by humans. 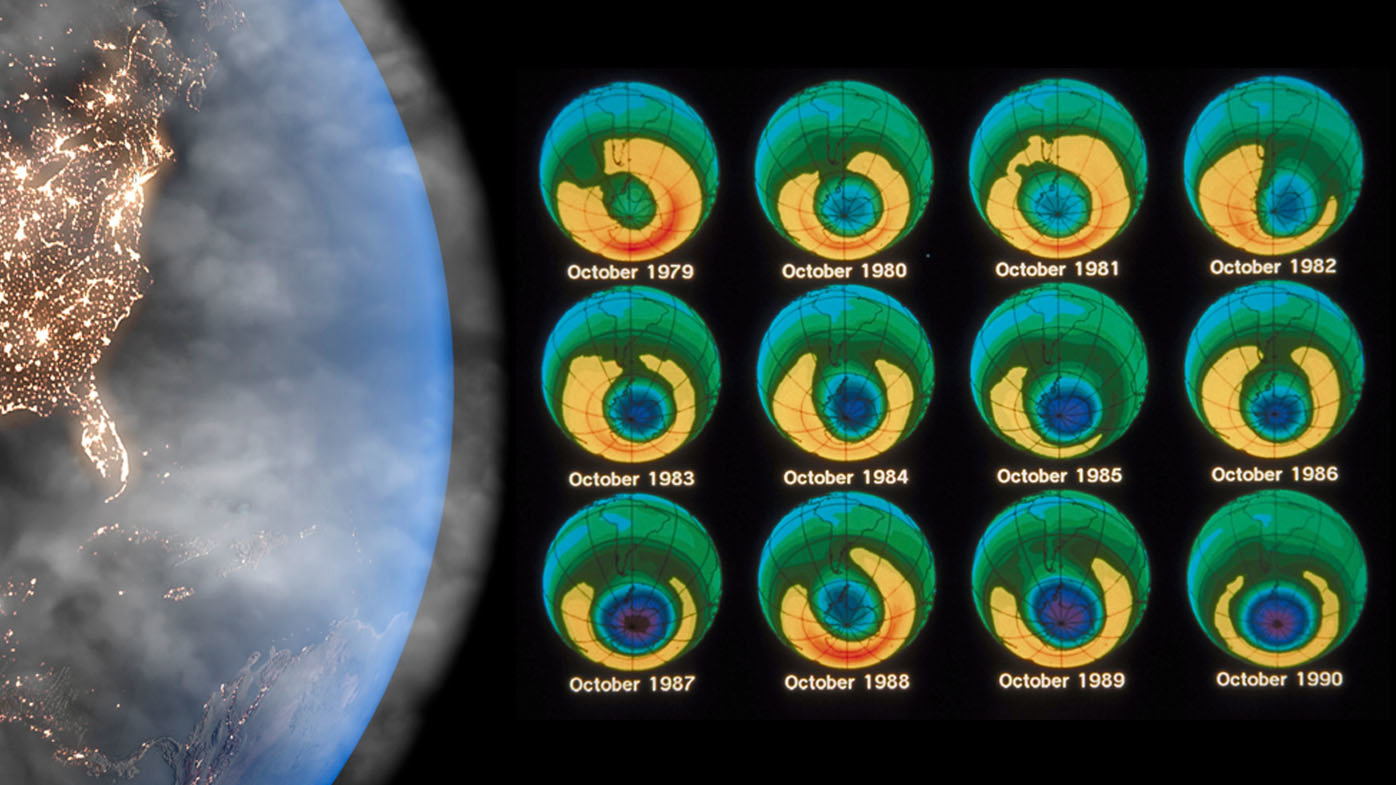 These ozone-depleting chemicals – like ﻿CFCs, hydrochlorofluorocarbons (HCFCs) and Hydrobromofluorocarbons (HBFCs) – were once found in many commonly used household products.

A staggering 98 per cent of the chemicals in the treaty had been phased out by 2009 after production and consumption of CFCs stopped in the 90s and early 2000s.

Amendments have tightened restrictions on substances used to replace CFCs, like HCFCs, which have been found to have detrimental impacts on global warming.

"The most commonly used HCFC is nearly 2000 times more potent than carbon dioxide in terms of its global warming potential," the UN Environment Program states.

"Recognising the potential benefits to the Earth's climate, in September 2007 the Parties decided to accelerate their schedule to phase out HCFCs."

READ MORE: What to do if you encounter a deadly snake, spider or jellyfish

What would've happened if the ozone hole wasn't repaired?

Earth would have been in real danger if the use of these ozone-depleting chemicals ﻿had not been limited.

Krummel said the hole would be "an enormous size" and not "just over the pole", it would be worldwide.

"If we didn't have that, we'd have a lot more instances of things like skin cancer and cataract damage," he said.

"And those sorts of things are usually as biologically harmful ultraviolet radiation.

"We'd be seeing much higher instances of cancers and cataracts, potentially large crop damages across the globe – that also means lower production rates of food.

"It's quite essential that we have the ozone layer, hence this protocol was brought in worldwide." 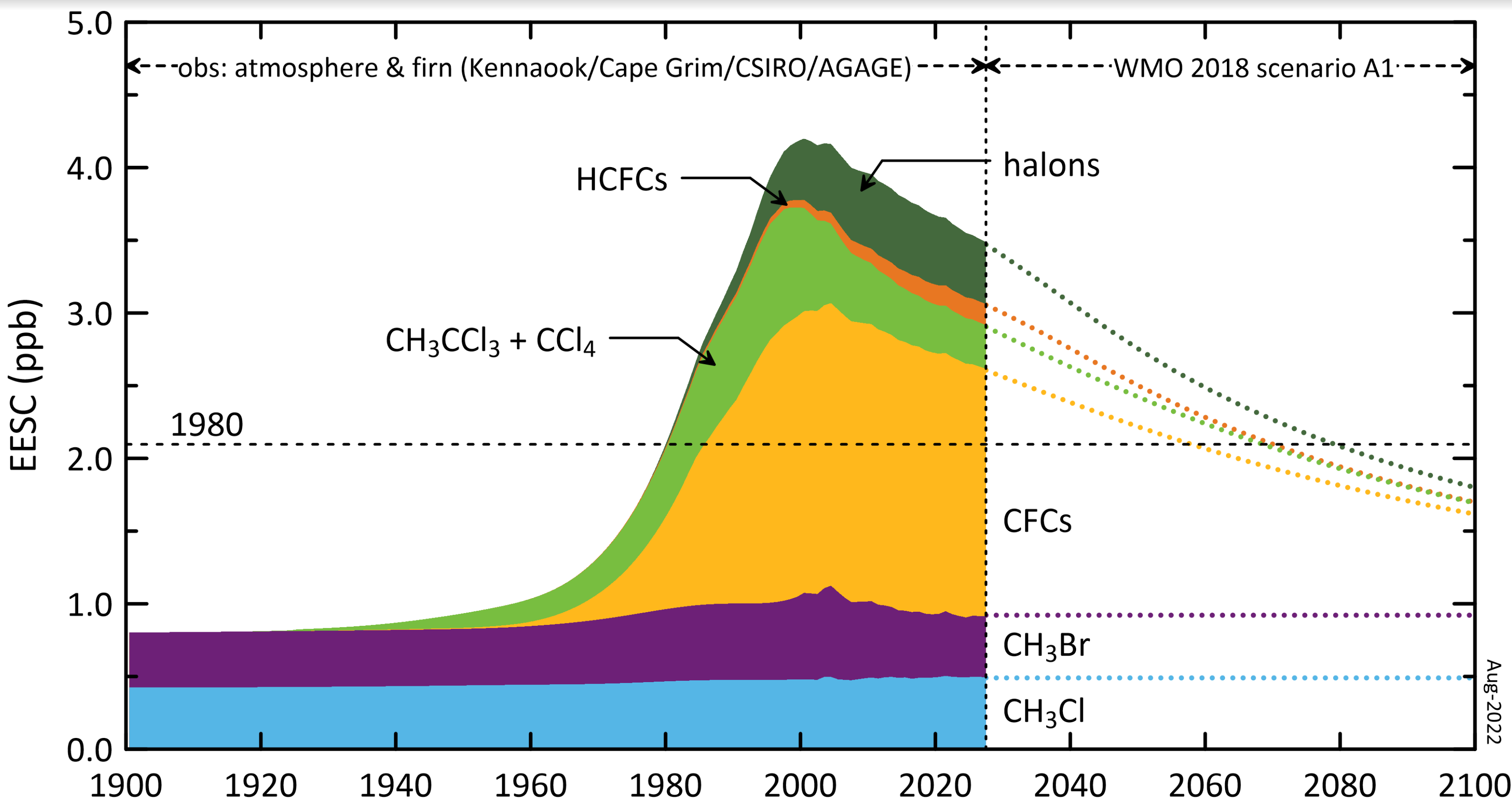 The UN Environment Program has claimed the Montreal Protocol "may have prevented up to two million cases of skin cancer each year by 2030 and avoided millions of cases of cataracts worldwide".﻿

There have been a "couple of cases" of countries being found to produce banned ﻿ozone-depleting substances, Krummel said.

A mysterious rise in CFCs in the atmosphere was linked to ﻿China in 2019.

"We found that out and we reported it and the Chinese government has actually cracked down on it," Krummel said.

The Chinese government said it had started clamping down on production by "rogue manufacturers" when the rise was detected.

EXPLAINED: Scientists have found new 'zombie viruses', should we be worried?﻿

How is the ozone hole now?﻿ Should I be worried?

The hole still exists but scientists project the ozone layer to return to a condition not seen since before 1980 by about 2050.

The overall recovery of the ozone hole is a "slow process", but Krummel said humans are headed in the right direction for the ﻿issue "not to be much of a problem at all".

"We are definitely on track," Krummel said.

"My main area of research is measuring the levels of the ozone-depleting substances in the atmosphere and they are reducing at the moment.

The most notable prison breaks around the world