The leaders of France, Germany, Italy and Romania arrived in Kyiv on Thursday in a show of collective European support for the Ukrainian people as they resist Russia's invasion.

The trip marks the highest-profile visit to Ukraine's capital since Russia invaded its neighbour.

The French president's office said that Emmanuel Macron, German Chancellor Olaf Scholz and Italian Premier Mario Draghi, representing the three largest economies in Europe, had travelled to Kyiv together on a special overnight train provided by the Ukrainian authorities. President Klaus Iohannis of Romania — which borders Ukraine and has been a destination for many Ukrainian refugees — arrived on a separate train, tweeting on arrival: "This illegal Russian aggression must stop!"

After getting off the train in Kyiv, Macron said he and the other leaders would visit sites where attacks occurred.

"It's a message of European unity for the Ukrainian people, support now and in the future, because the weeks to come will be very difficult," Macron said.

The visit comes as the Russian forces press their offensive in the eastern Donbas region, slowly but steadily gaining ground on the badly outmanned and outgunned Ukrainian forces, who are pleading desperately for more arms from western allies.

Several air raid sirens rang out while the European leaders were in their hotel preparing for the rest of their visit, and Kyiv authorities urged people to seek shelter.

Such alerts are a frequent occurrence.

As he left the hotel, Macron, putting his hand on his heart, said in English: "I want to show my admiration for the Ukrainian people." 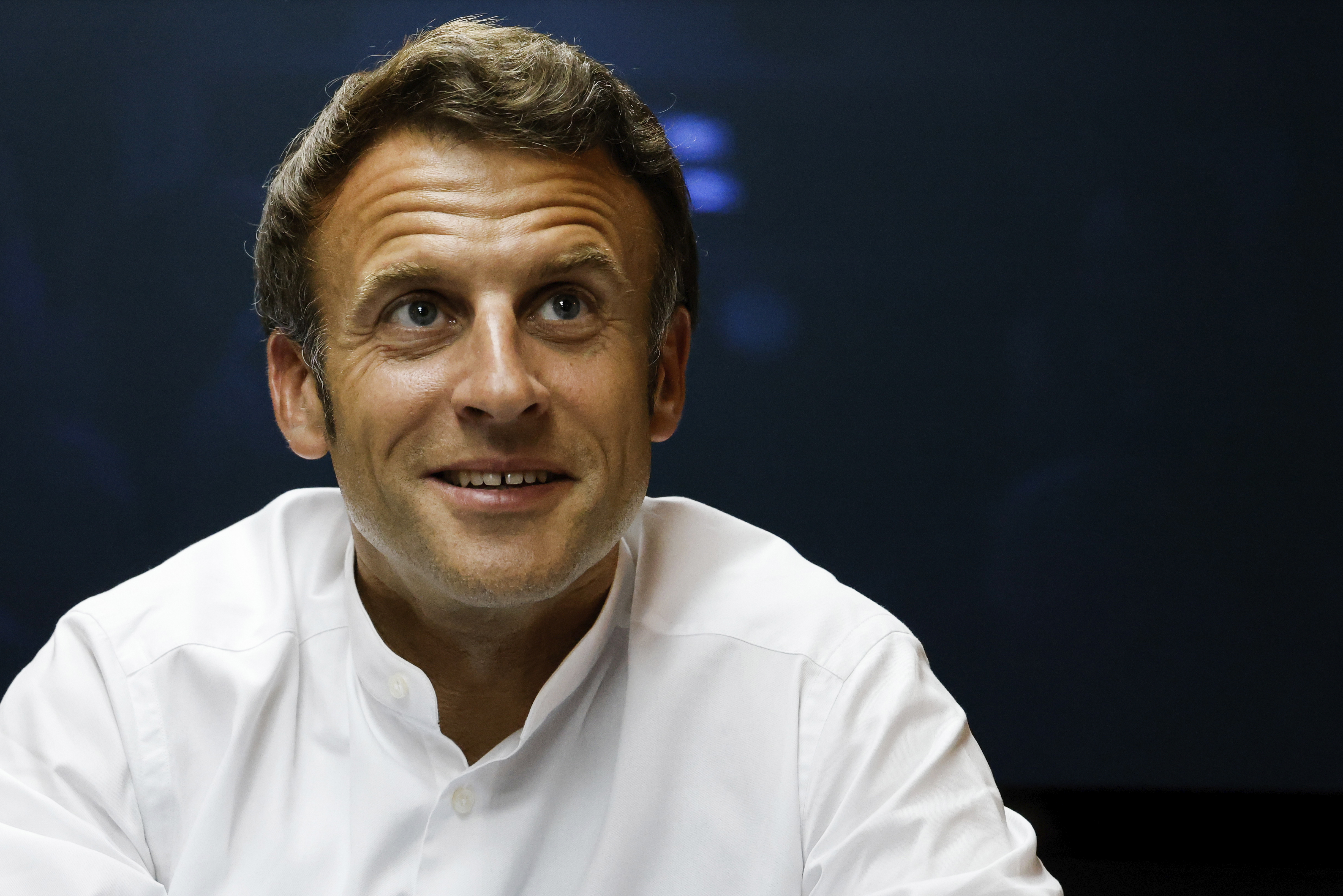 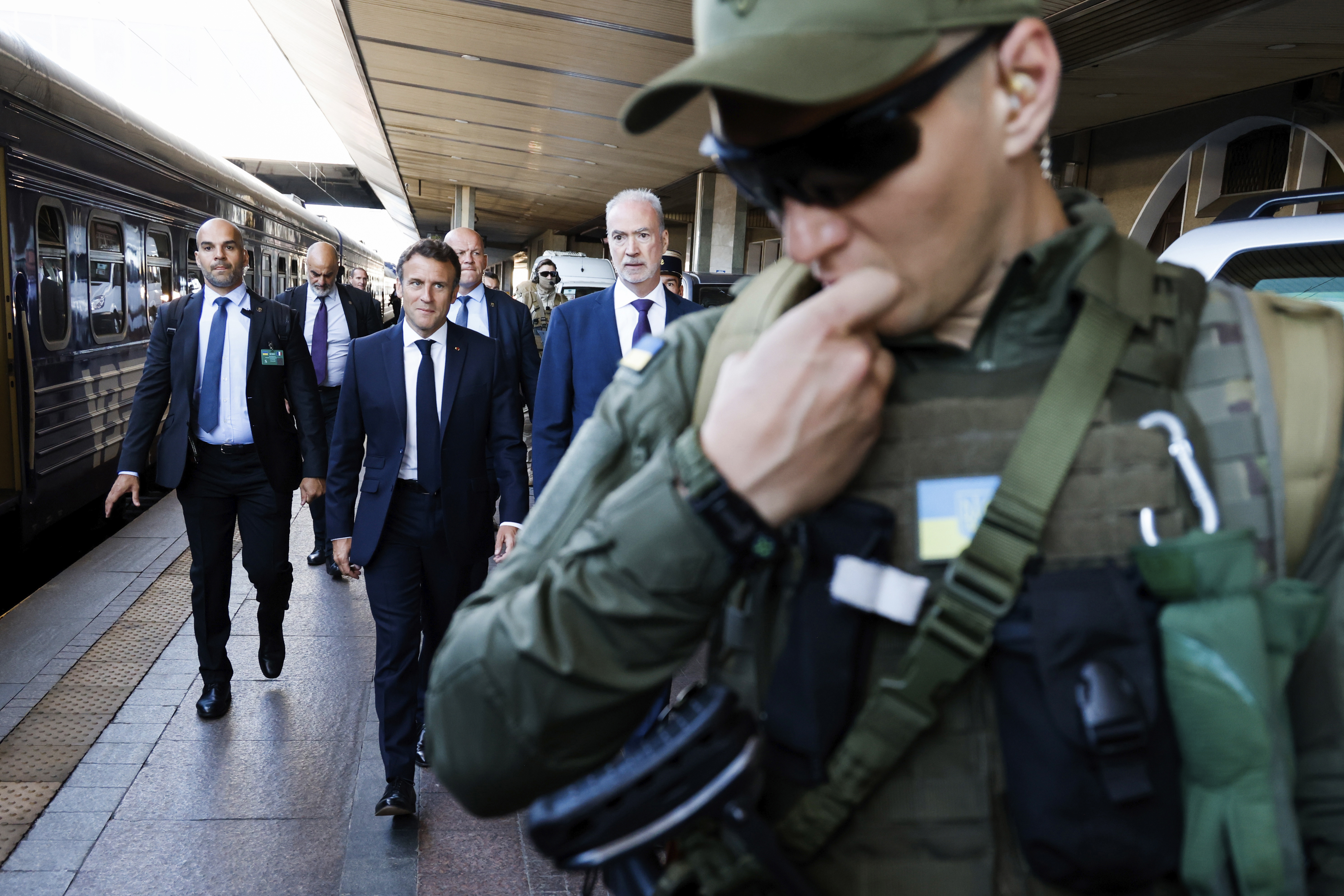 German news agency dpa quoted Scholz as saying that the leaders are seeking to show solidarity but also their commitment to keeping up their financial and humanitarian help for Ukraine, and their supply of weapons.

Scholz added that this support would continue "for as long as is necessary for Ukraine's fight for independence."

Scholz said that the sanctions against Russia were also significant and could lead to Moscow withdrawing its troops, according to dpa.

The European leaders are to meet with Ukraine's President Volodymyr Zelenskyy.

The visit carries heavy symbolic weight given that the three Western European powers have often faced criticism for not providing Ukraine with the scale of weaponry that Zelenskyy has been begging them for, and for their willingness to keep speaking to Russian President Vladimir Putin.

Many leaders and regular people in the Baltic and Central European nations, which were controlled by Moscow during the Cold War, believe that Putin only understands force, and have viewed the efforts by Macron and others to keep speaking to Putin following his invasion as unacceptable.

Hopes were high among Ukrainians that the visit could mark a turning point by opening the way to significant new arms supplies.

The visit comes as EU leaders prepare to make a decision on June 23 to 24 on Ukraine's request to become a candidate for EU membership, and ahead of an important NATO summit June 29 to 30 in Madrid.

On Wednesday, the US and Germany announced more aid, as America and its allies provide longer-range weapons they say can make a difference in a fight where Ukrainian forces are outnumbered and outgunned by their Russian invaders.

On Tuesday, during a trip to Ukraine's neighbours Romania and Moldova, Macron said a "message of support" must be sent to Ukraine before EU heads of state and government "have to make important decisions" at their Brussels meeting. "We are in a moment where we need to send clear political signals — we, Europeans, we the European Union — toward Ukraine and the Ukrainian people," he said.

Macron is deeply involved in diplomatic efforts to push for a cease-fire in Ukraine that would allow future peace negotiations.

He has frequent discussions with Zelenskyy and has spoken on the phone several times with Russian President Vladimir Putin since Putin launched the invasion in late February.

Scholz had long resisted travelling to Kyiv, saying he didn't want to "join the queue of people who do a quick in-out for a photo opportunity".

Instead, Scholz said a trip should focus on doing "concrete things".

Germany on Wednesday announced that it will provide Ukraine with three multiple launch rocket systems of the kind that Kyiv has said it urgently needs to defend itself against Russia's invasion. Lambrecht, speaking on the sidelines of a meeting of NATO defence ministers in Brussels, said that training of Ukrainian soldiers in Germany on advanced howitzers whose delivery Berlin had already announced will soon be completed.

She said the multiple launch rocket systems can be delivered in late July or early August following training on that equipment.

Lambrecht has said that Germany expects the systems to have "a swift and significant battlefield impact".