For decades the Amur River has separated modern China and Russia — its waters cutting though more than 1600 of their roughly 4000 border kilometres. But it's always lacked one thing: a vehicle bridge.

Now — as Russia's economic isolation in the wake of its invasion of Ukraine pushes it closer to Beijing — that is changing, with fanfare.

Last Friday, Beijing and Moscow feted the launch of another new link — what state media on both sides have called the first highway bridge over the Amur — with rockets trailing colourful smoke bursting overhead, and local officials applauding from the riverbanks.

Their superiors beamed in from Moscow and Beijing on giant television screens specially brought in for the day.

A second crossing, the only railway bridge to connect the countries across the river, is expected to open soon.

For the maiden highway journey last week, eight freight trucks from China and eight from Russia drove in procession over the kilometre-long bridge, each bearing two oversized national flags on either side of their cabs, as they glided by each other in choreography captured by aerial drones.

The Chinese freighters carried electronics and tyres, the Russian ones soybean oil and sawn timber, according to Moscow. And if any viewers were in doubt about the symbolism — coming as the war in Ukraine has left Moscow desperate to show it still has friends and trade partners — a Russian deputy prime minister filled in the blanks.

"The Blagoveshchensk-Heihe bridge has special symbolic significance in today's disunited world. It will become yet another thread of friendship linking the people of Russia and China," said Yury Trutnev, the Kremlin's envoy to the Russian Far East. 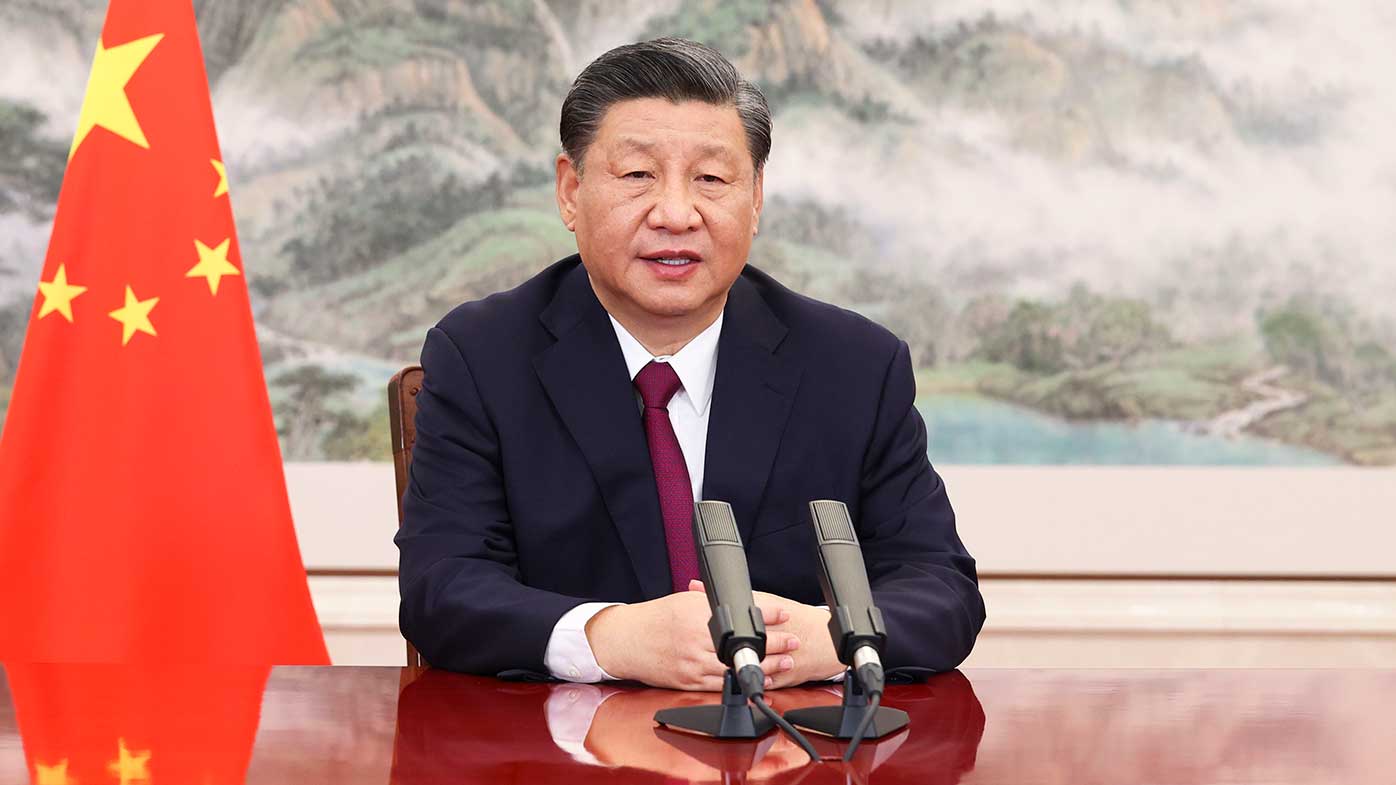 That point was further underlined in a call between Russian President Vladimir Putin and Chinese leader Xi Jinping on Wednesday, where the two discussed the opening of their new cross-border link and their "steadily progressing" economic ties, according to a readout from China's Foreign Ministry.

The bridge would "create a new channel connecting the two countries," Xi said during the call, which took place on his 69th birthday.

"The Chinese side stands ready to work with the Russian side to push for steady and long-term development of practical bilateral cooperation," Xi said.

The US$369 million ($533 million) project connects the twin cities of Heihe city in China's Heilongjiang province with the Amur region's capital Blagoveshchensk in the Russian Far East. Moscow expects it to clear some 4 million tonnes of goods and two million passengers each year when fully operational. That is likely to further boost bilateral trade between China and Russia, already forecast to climb as Moscow increasingly looks to Beijing for economic partnership, though questions remain over how far China will go to support its sanctions-hit neighbour.

The timing of the bridge's launch underlines Beijing's interests in that partnership. It comes even as China continues with an unrelenting "zero-COVID" regime, which has seen the country repeatedly tightening land border controls — erecting fences facing Myanmar, backlogging border crossings with stringent checks and even urging its citizens on the North Korean border to shut their windows lest virus blow over. 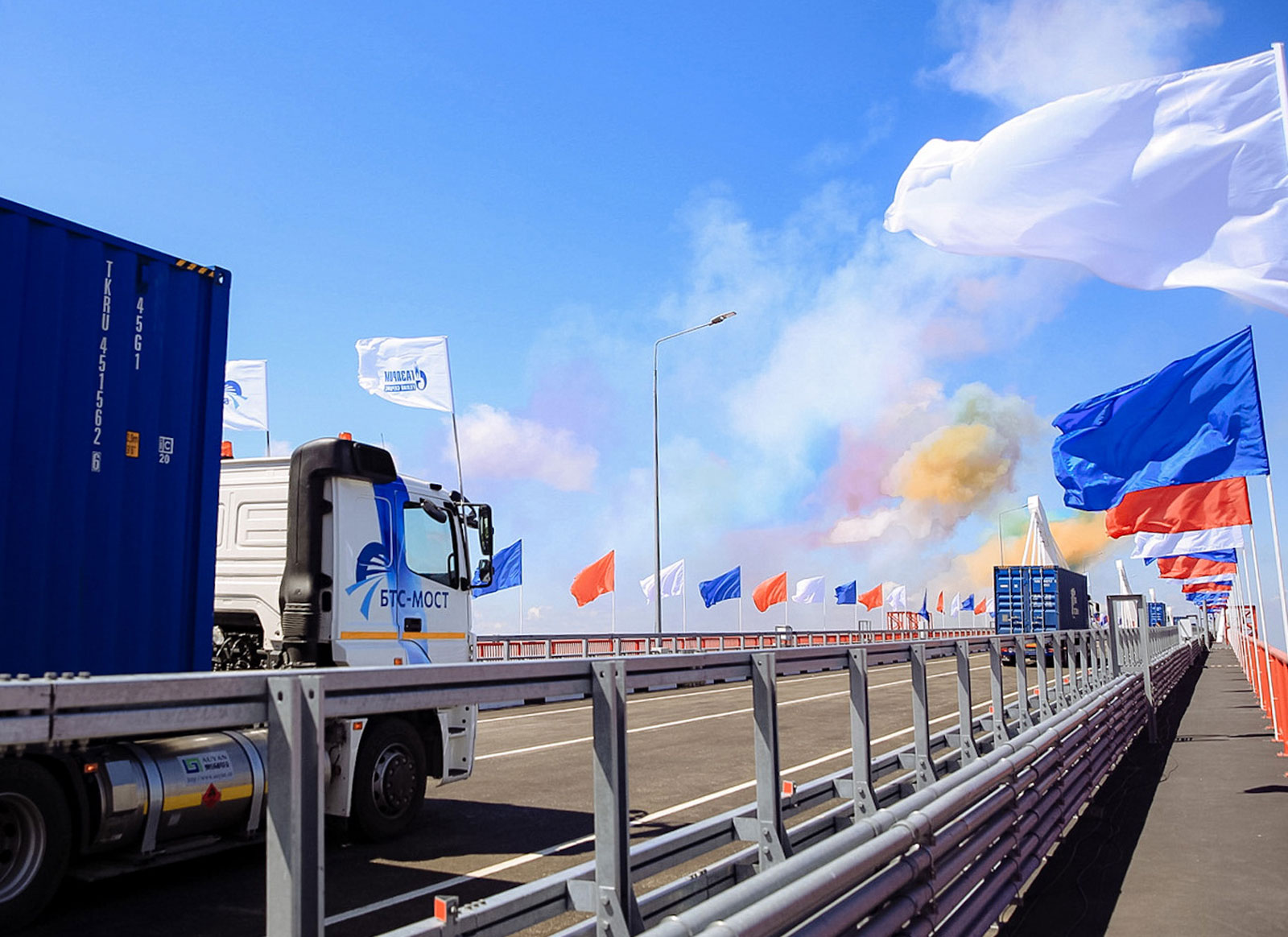 The two bridges are years in the making, with the railway project — further east along the Amur in China's Tongjiang city and Russia's Nizhneleninskoye — breaking ground in 2014. Friday's opening of the highway bridge followed a similar path: construction started in 2016 and was largely completed more than two years ago, but its opening stalled due to the pandemic.

The new crossings highlight burgeoning ties between the countries. These have grown under Putin and Xi and include an aim, expressed by Moscow this spring, to hit US$200 billion ($289 billion) in trade by 2024, up from a record-breaking US$146 billion ($211 billion) last year.

"Just recently Russia and China didn't have a single bridge across the Amur River, but now they have as many as two bridges … so the trend is clear," said Artyom Lukin, an associate professor of international relations at the Far Eastern Federal University in Vladivostok.

But the bridges — each built in two halves, by the Chinese on one side and the Russians on the other — and the river they traverse also underline the uneasy foundations of that relationship. 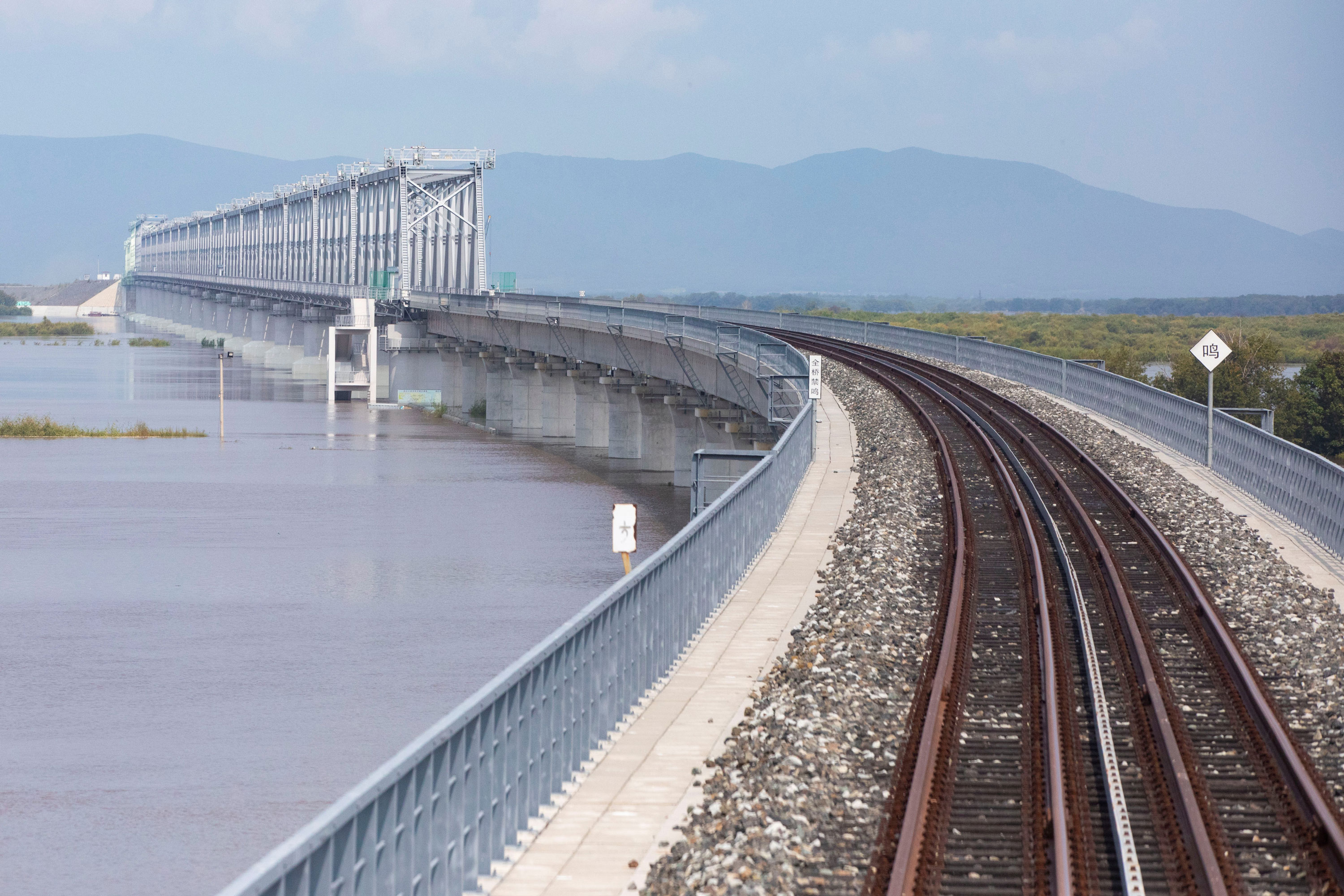 Known as the Amur in Russia and Heilongjiang in China, its riverbanks were once tense, heavily patrolled zones. An Amur tributary was the site of a 1969 border conflict, the result of ratcheting tensions between the Soviet Union and a young Communist China, and it wasn't until the 1990s that territorial disputes were largely settled.

Agreements at that time to develop the cooperation across the river stalled for years, as pontoons, hovercrafts and seasonal ice roads remained the means of ferrying people and goods across, while land and maritime connections elsewhere in the countries handled more trade.

Previous routes weren't sufficient, giving the rising volume of trade between Russia and China, according to Lukin.

"China has always been pushing for more port infrastructure, but Russia was a bit reluctant until recently to build this kind of infrastructure, for fear of becoming too dependent on China," Lukin said.

"But now Russia has no choice," he said, adding that since Russia's annexation of Crimea in 2014 and the ensuing Western backlash, Russia has been "much more open" to Chinese initiatives to develop cross-border infrastructure. 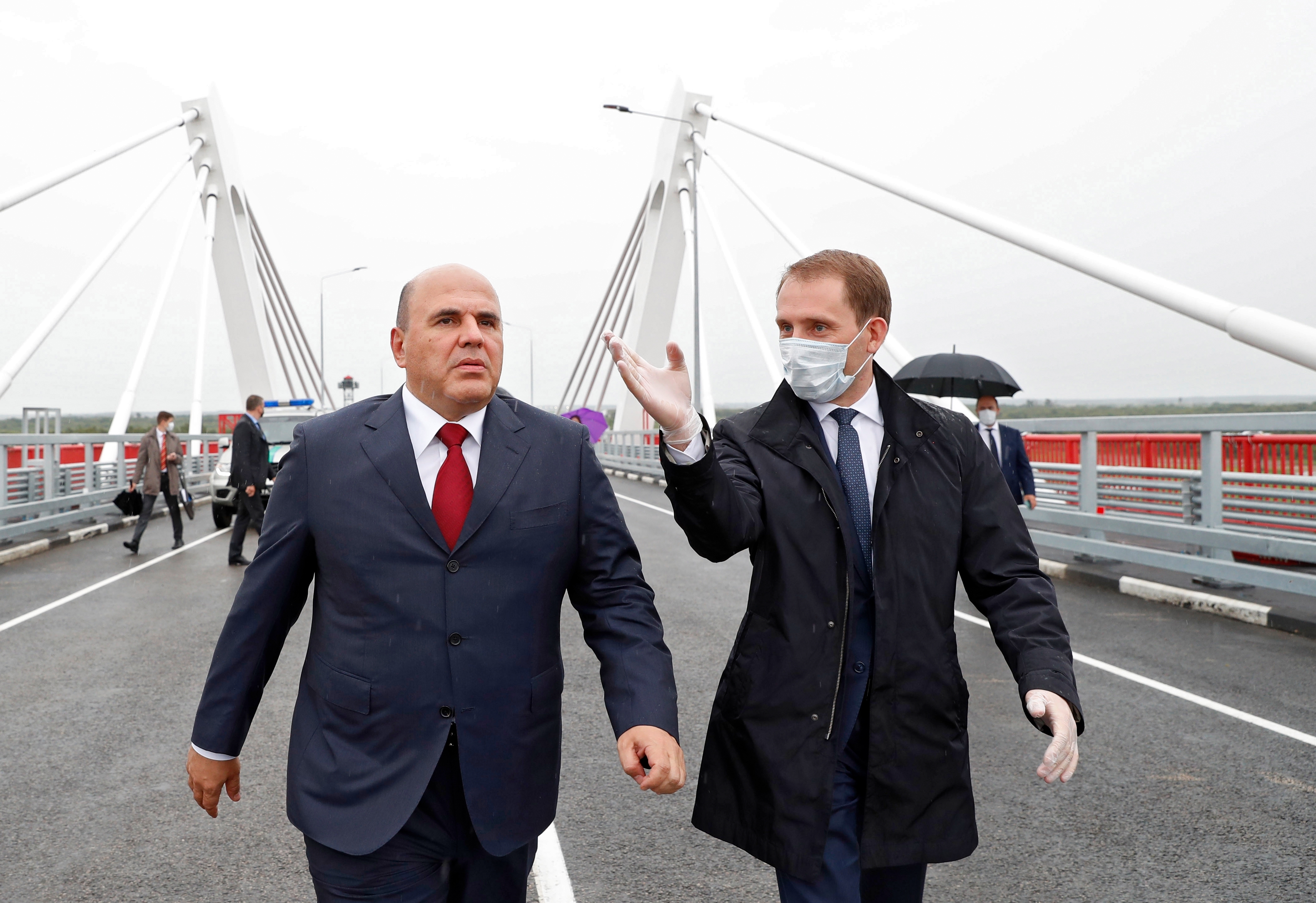 The highway bridge, in its original conception, was meant not just to enable the transit of goods, but to lead to new economic zones and passenger travel between the Chinese city of Heihe, home to around 1.3 million in its metropolitan area, and Blagoveshchensk, with a population of around a quarter-million.

China's COVID-19 policies may put that on hold for now, as the bridge will start only with freight, officials said. And even during Friday's opening ceremony, the country's now-infamous hazmat-clad workers were along the roadside welcoming the Russian freight trucks, a reminder of tight controls.

But the prospect of even closer cross-border ties for Heihe and Blagoveshchensk, which had already flourished with tourism and trade before the pandemic, could usher in a new phase for the region. According to local media, the government has ordered all students in Blagoveshchensk to study Chinese from September 1.

The opening may provide economic vitality for a "thinly populated" region of Russia, according to Yu Bin, a professor of political science at Ohio's Wittenberg University and a senior fellow at the Russian Studies Centre of the East China Normal University in Shanghai.

It could also signal a shift away from the Russian "perception, or misperception" that such links could spark an influx of Chinese nationals into Russia's Far Eastern regions, Yu said.

There's been scant evidence of such a trend, but those concerns have been linked to disparities between the two sides of the river. Heihe, part of Heilongjiang province with some 31 million people, over recent decades has grown into a bustling city with a colourful skyline that is reflected in the Amur River at Blagoveshchensk.

Blagoveshchensk has seen slower growth and long experienced a population drain to western Russia, like the larger Far East region. The region makes up more than 40 per cent of the country's land, but its 8 million residents are only 5 per cent of its population.

"This time, Western sanctions against Russia seem to have helped alleviate these misperceptions and concerns about China's potential immigration," Yu said.

On a national level the bridge — held up as a major diplomatic and economic win by Russian state media — also underlines a hanging question about how far Beijing will go to support Russia amid the international crisis it has provoked following its invasion of Ukraine.

So far, China has walked a thin line. Beijing has said it upholds a rules-based world order, while refusing to join most of the world in condemning Moscow's move and using its state media apparatus to mimic Kremlin lines blaming the United States and NATO for the crisis.

It's also boosted some imports from its heavily sanctioned neighbour, while appearing careful to avoid incurring any itself, treading carefully around high-tech exports that Western countries have widely blocked for export to Russia.

"The first batch of cargo which crossed into China from Blagoveshchensk on the day of the official opening, soybean oil … underscores this role which Russia plays for China economically as a provider of natural resources and commodities," said Far Eastern Federal University's Lukin.

"The more interesting question," he said, "is what will be coming from China via this bridge?"