The white gunman who killed 10 Black people in a racist attack at a Buffalo supermarket has been charged with federal hate crimes and could face the death penalty if convicted.

The criminal complaint filed on Wednesday against Payton Gendron coincided with a visit to Buffalo by Attorney General Merrick Garland. He met with the families of the people who were killed and placed a bouquet of white flowers tied with a yellow ribbon at a memorial outside the store, which has been closed since the attack.

"No one in this country should have to live in fear that they will go to work or shop at a grocery store and will be attacked by someone who hates them because of the colour of their skin," Garland said at a news conference addressing the federal charges.

READ MORE: Buffalo gunman aimed to keep killing if he got away

Garland, who halted federal executions last year, did not rule out seeking the death penalty against Gendron. He said the Justice Department would follow long-established procedures in weighing whether to seek capital punishment and that the "families and the survivors will be consulted" in the process.

Three of 86-year-old victim Ruth Whitfield's children said they told Garland at their private meeting that they appreciated him being there and wanted to make sure he didn't view the Buffalo shooting "as a singular case."

"This is a problem throughout America," her son, former Buffalo Fire Commissioner Garnell Whitfield Jr. said.

"It doesn't stop with justice for our mother and the other nine victims. It's how do we prevent these horrific crimes from happening, from breaking the hearts of other families," his brother Raymond Whitfield said.

Gendron, 18, was already facing a mandatory life sentence without parole if convicted on previously filed state charges in the May 14 rampage at Tops Friendly Market. 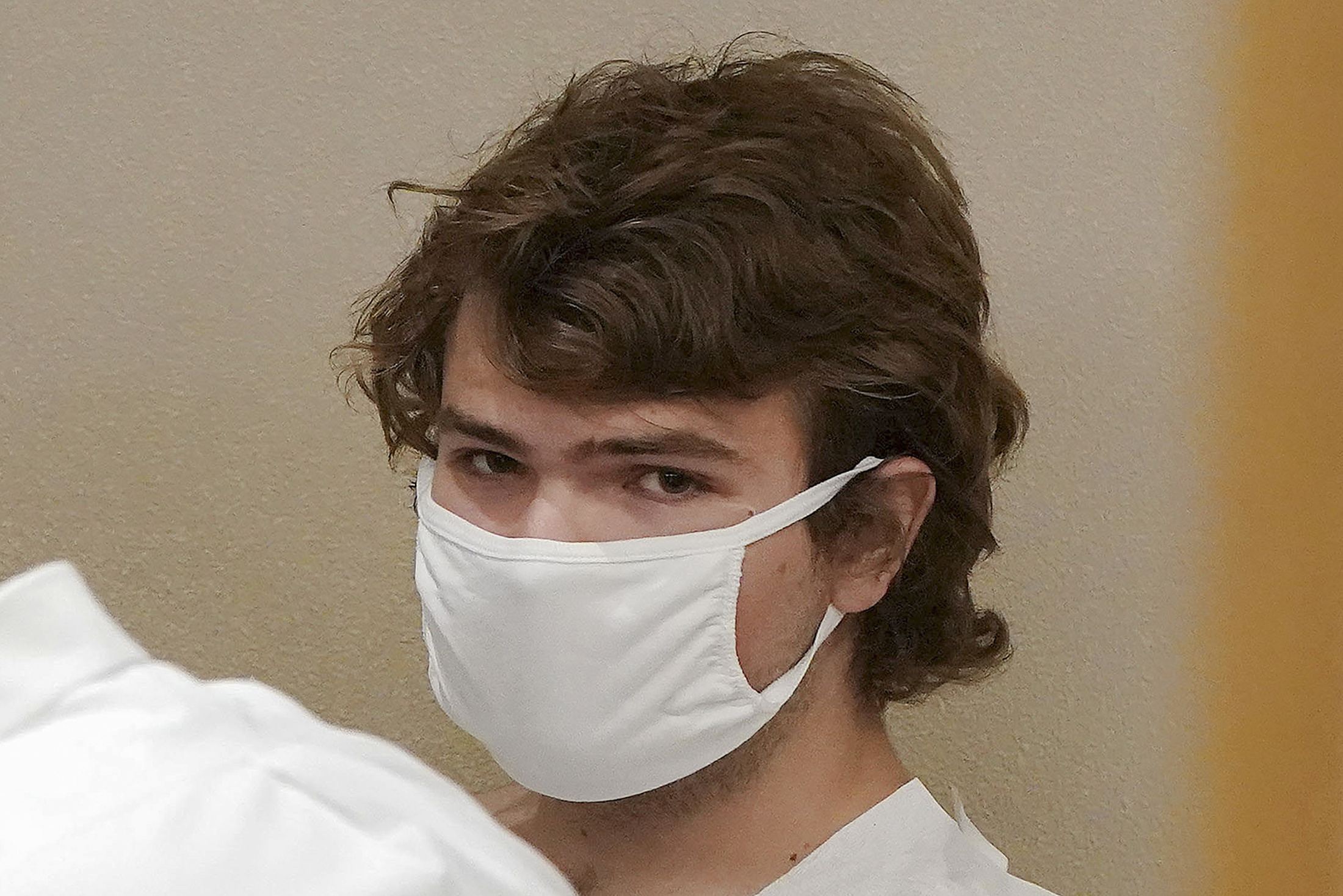 The federal hate crimes case is based partly on documents in which Gendron laid out his radical, racist worldview and extensive preparation for the attack, some of which he posted online shortly before he started shooting.

FBI agents executing a search warrant at Gendron's home the day after the shooting found a note in which he apologised to his family for the shooting and stated that he "had to commit this attack" because he cares "for the future of the White race," according to an affidavit filed with the criminal complaint.

Agents at the Conklin, New York home also found a receipt for a candy bar purchased from the supermarket on March 8, the day Gendron said in an online diary he went to scout out the store, as well as hand drawn sketches of the store's layout, the affidavit said.

The affidavit also includes detailed accounts of Gendron's plot to attack the store, which he documented in detail in the online diary, and the attack itself, which he live streamed on social media. 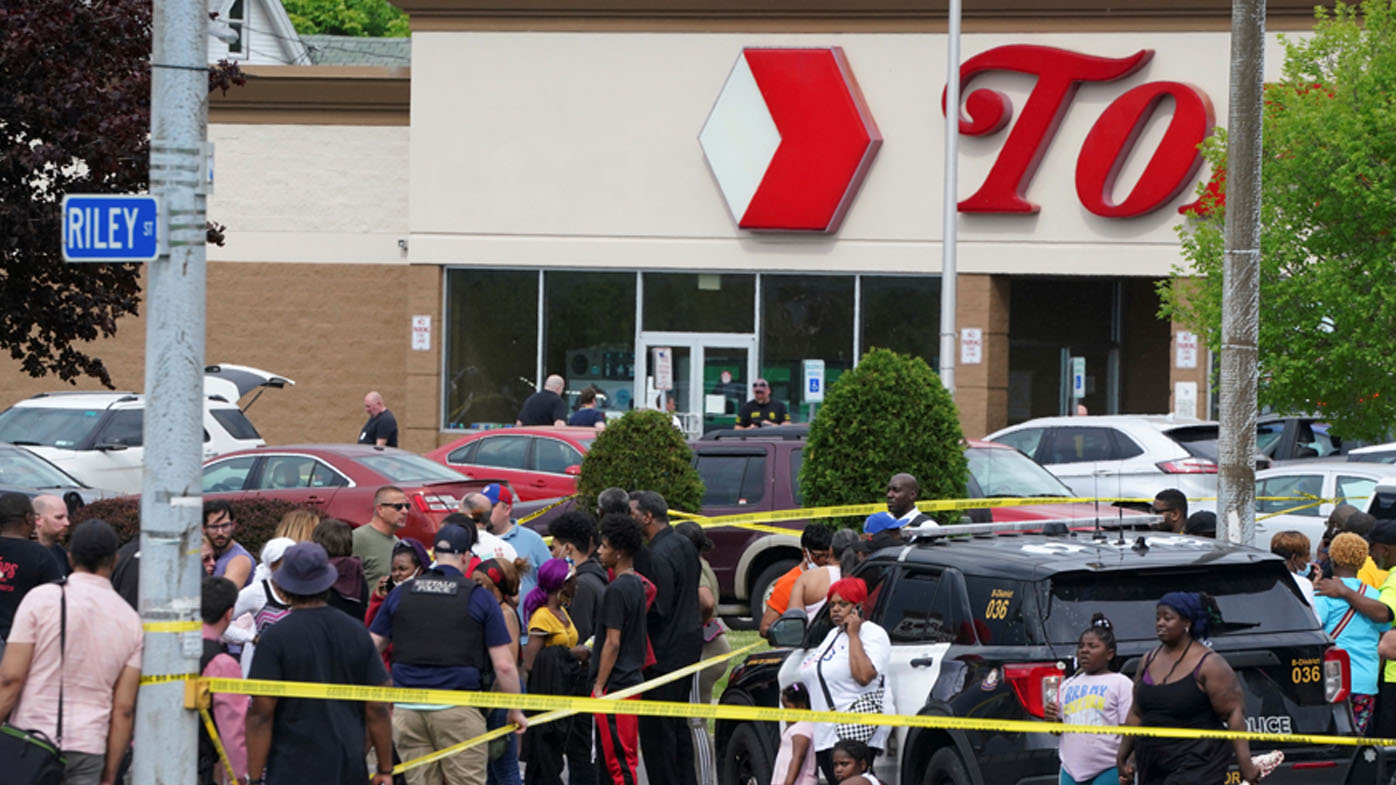 Shortly before he opened fire, Gendron invited a small group of people to see his plans for the attack. It wasn't clear if any of the people who accessed Gendron's diary or saw his livestream did anything to alert the authorities or attempt to stop the attack.

Garland and Deputy FBI Director Paul Abbate said investigators are looking into who Gendron may have been in communication with prior to the shooting.

In his writings, Gendron embraced a baseless conspiracy theory about a plot to diminish white Americans' power and "replace" them with people of colour, through immigration and other means.

The posts detail months of reconnaissance, demographic research and shooting practice for a bloodbath aimed at scaring everyone who isn't white and Christian into leaving the country.

Gendron drove more than 300km from his home in a nearly all-white town near the New York-Pennsylvania border to a predominantly Black part of Buffalo. There, authorities say, he fired approximately 60 shots at shoppers and workers using an AR-15-style rifle, wearing body armour to protect himself and livestreaming the carnage from a helmet-mounted camera. 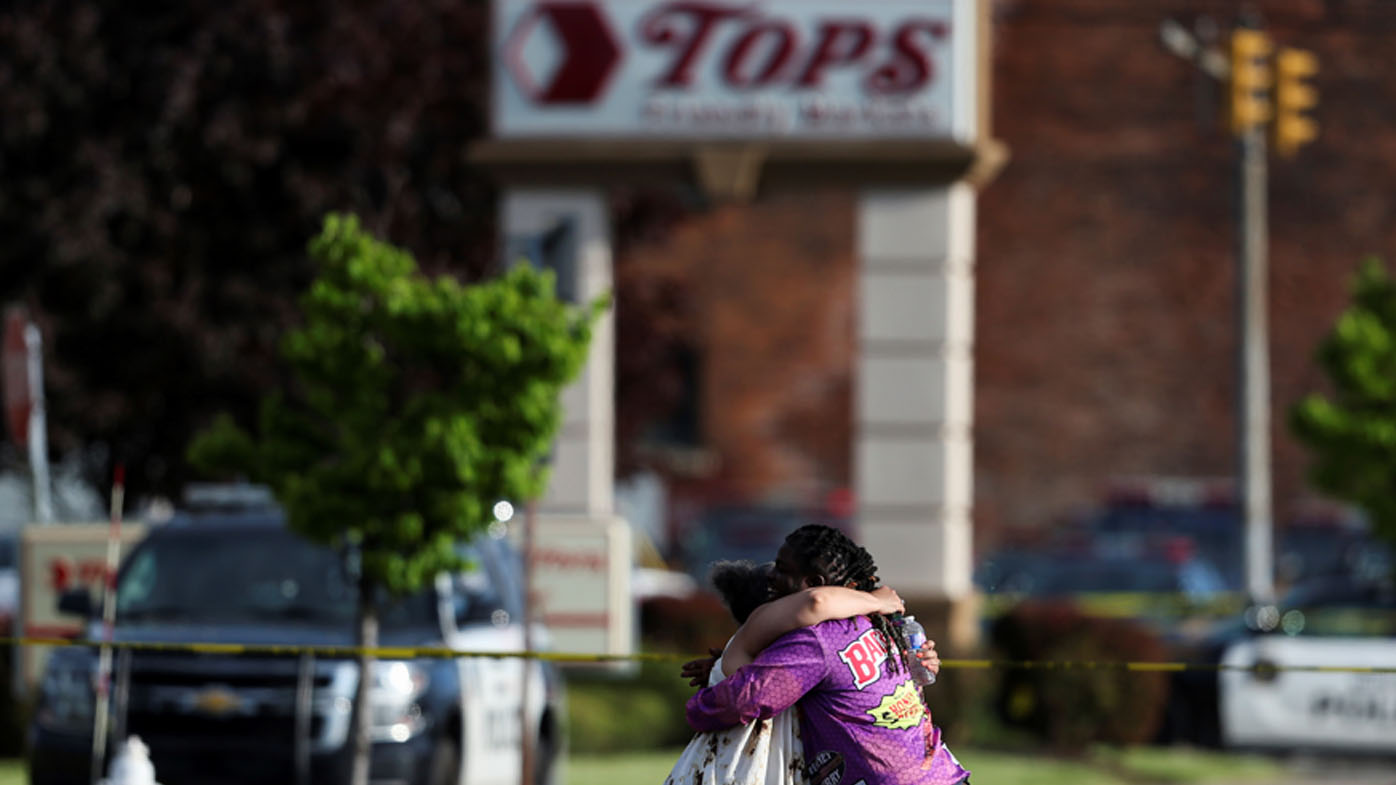 Three wounded people — one Black, two white — survived the attack. According to the affidavit, Gendron momentarily held his fire to apologise to a white store employee after shooting him in the leg, then returned to targeting Black people. Gendron surrendered to police as he exited the supermarket.

Gendron's rifle had writings on it, including the names of other people who've committed mass shootings, racial slurs and statements such as, "Here's your reparations!", and a reference to the replacement theory, the affidavit said.

The federal charges were announced just over a month after the shooting. 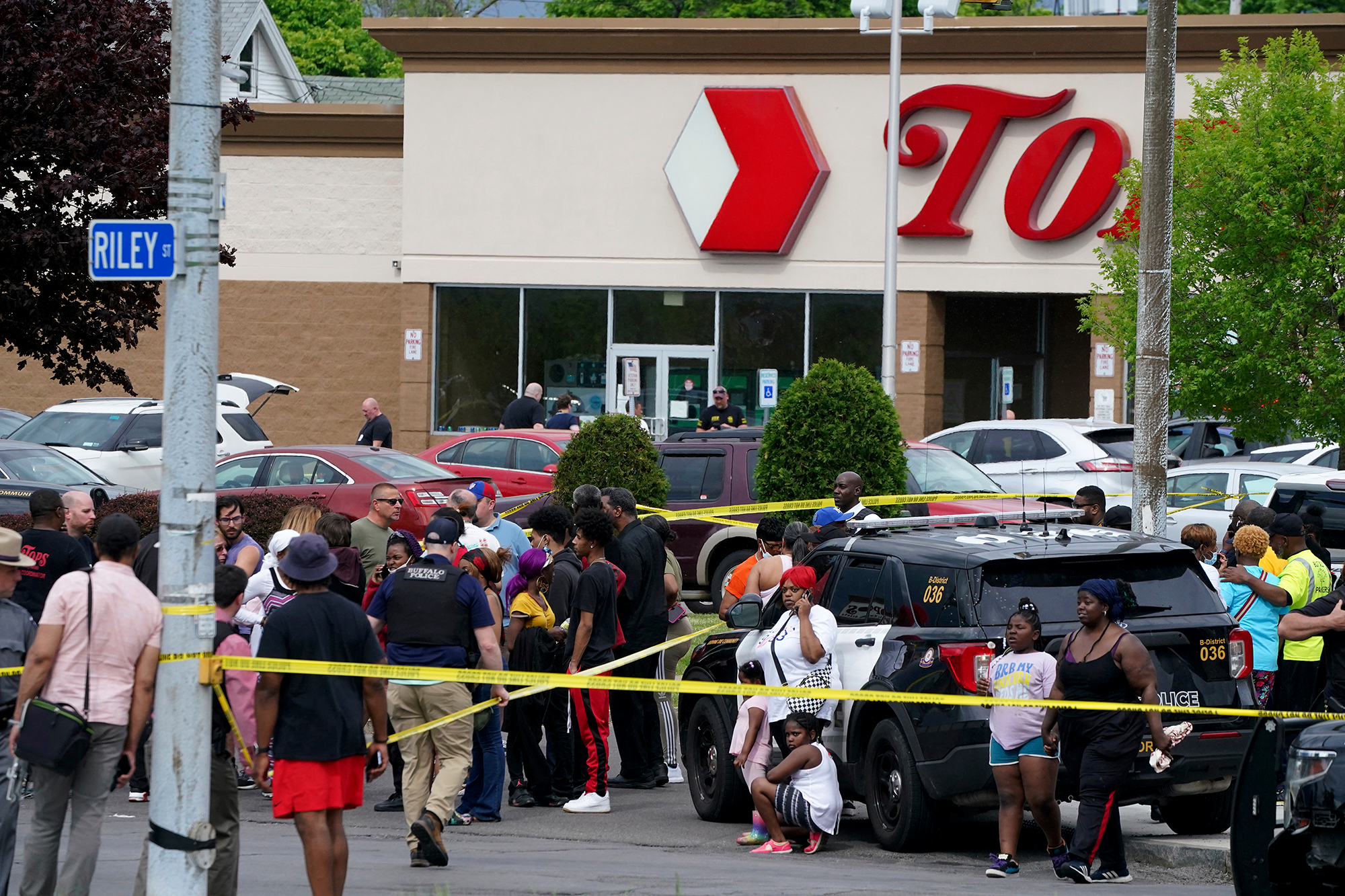 "This process may not be as fast as some would hope, but it will be thorough, it will be fair, it will be comprehensive and it will reflect what is best about our community and about democracy," said U.S. Attorney Trini Ross, a Buffalo native.

The case is likely to present a quandary for Garland, who has vowed to aggressively prioritise the prosecutions of civil rights cases but also instituted a moratorium on federal executions last year after an unprecedented run of capital punishment at the end of the Trump administration.

The moratorium put in place in July 2021 halts the Bureau of Prisons from carrying out any executions as the Justice Department conducts a review of its policies and procedures for capital punishment. But the memo does not prohibit federal prosecutors from seeking the death penalty, a decision that ultimately will fall to Garland.

President Joe Biden has said he opposes the death penalty and his team vowed that he would take action to stop its use while in office.

Ten days after the attack in Buffalo, another 18-year-old with a semi-automatic rifle opened fire at a Uvalde, Texas elementary school, killing 19 children and two teachers. 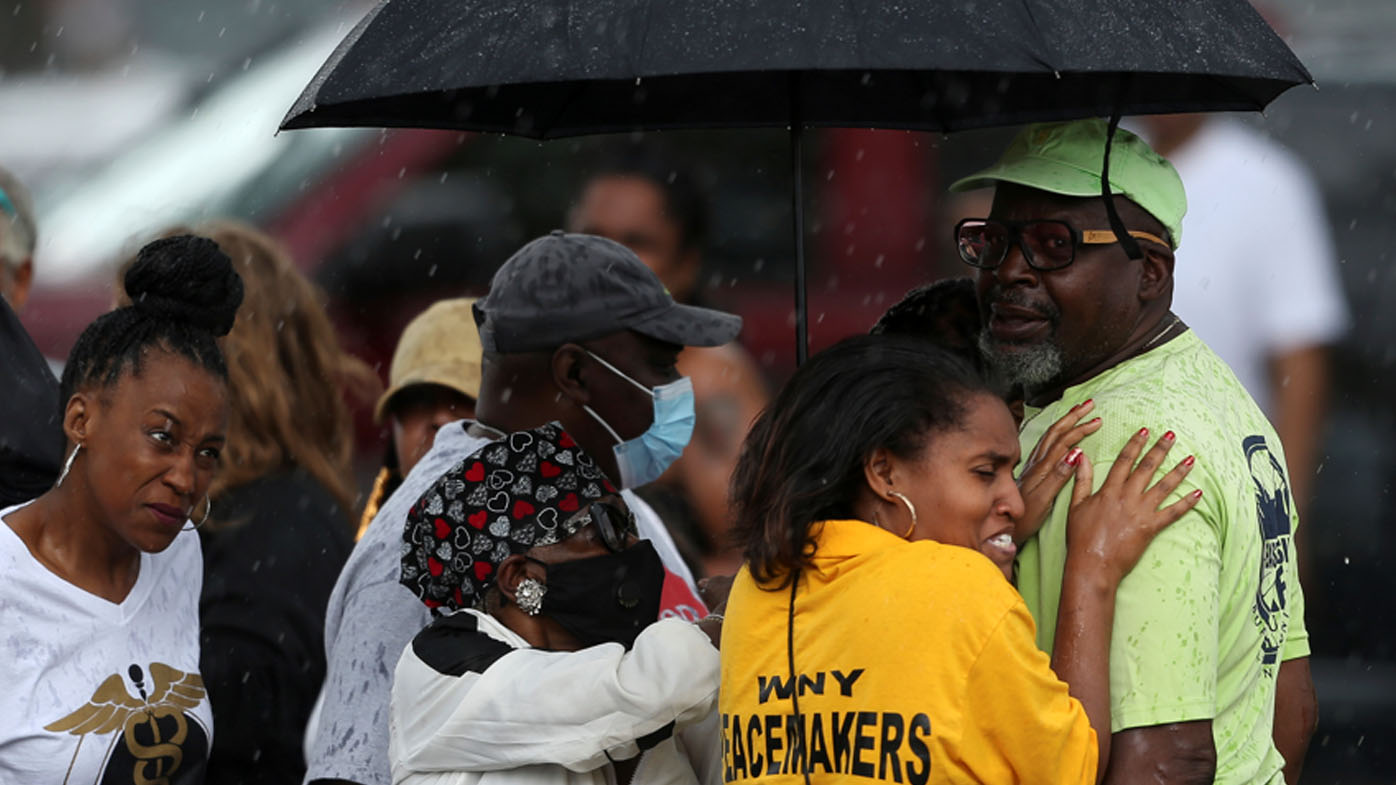 Garland on Wednesday endorsed changing federal law to raise the age for purchasing rifles, as President Joe Biden has said after the shootings in Buffalo and Uvalde.

"The Justice Department agrees with the president that 18-year-olds should not be able to purchase a gun like this," Garland said.