A long-lost painting by the British graffiti artist Banksy has resurfaced in a swank art gallery in downtown Tel Aviv, an hour's drive and a world away from the concrete wall in the occupied West Bank where it was initially sprayed.

The relocation of the painting — which depicts a slingshot-toting rat and was likely intended to protest the Israel occupation — raises ethical questions about the removal of artwork from occupied territory and the display of such politically-charged pieces in radically different settings from where they were created.

The painting initially appeared near Israel's separation barrier in the occupied West Bank city of Bethlehem and was one of several works created in secret around 2007. They employed Banksy's trademark absurdist and dystopian imagery to protest Israel's decades-long occupation of territories the Palestinians want for a future state.

Now it resides at the Urban Gallery in the heart of Tel Aviv's financial district, surrounded by glass and steel skyscrapers.

"This is the story of David and Goliath," said Koby Abergel, an Israeli art dealer who purchased the painting, without elaborating on the analogy. He said the gallery was simply displaying the work, leaving its interpretation to others.

The Associated Press could not independently confirm the authenticity of the piece, but Abergel said the cracks and scrapes in the concrete serve as "a fingerprint" that proves it is the same piece that appears on the artist's website.

READ MORE: NASA has figured out what mystery bundle of 'string' on Mars is The 70-kilometre journey it made from the West Bank to Tel Aviv is shrouded in secrecy. The 408-kilogram concrete slab would have had to pass through Israel's serpentine barrier and at least one military checkpoint — daily features of Palestinian life and targets of Banksy's biting satire.

Abergel, who is a partner with the Tel Aviv gallery, said he bought the concrete slab from a Palestinian associate in Bethlehem. He declined to disclose the sum he paid or identify the seller, but insisted on the deal's legality.

The graffiti artwork was spray-painted on a concrete block that was part of an abandoned Israeli army position in Bethlehem, next to a soaring concrete section of the separation barrier. 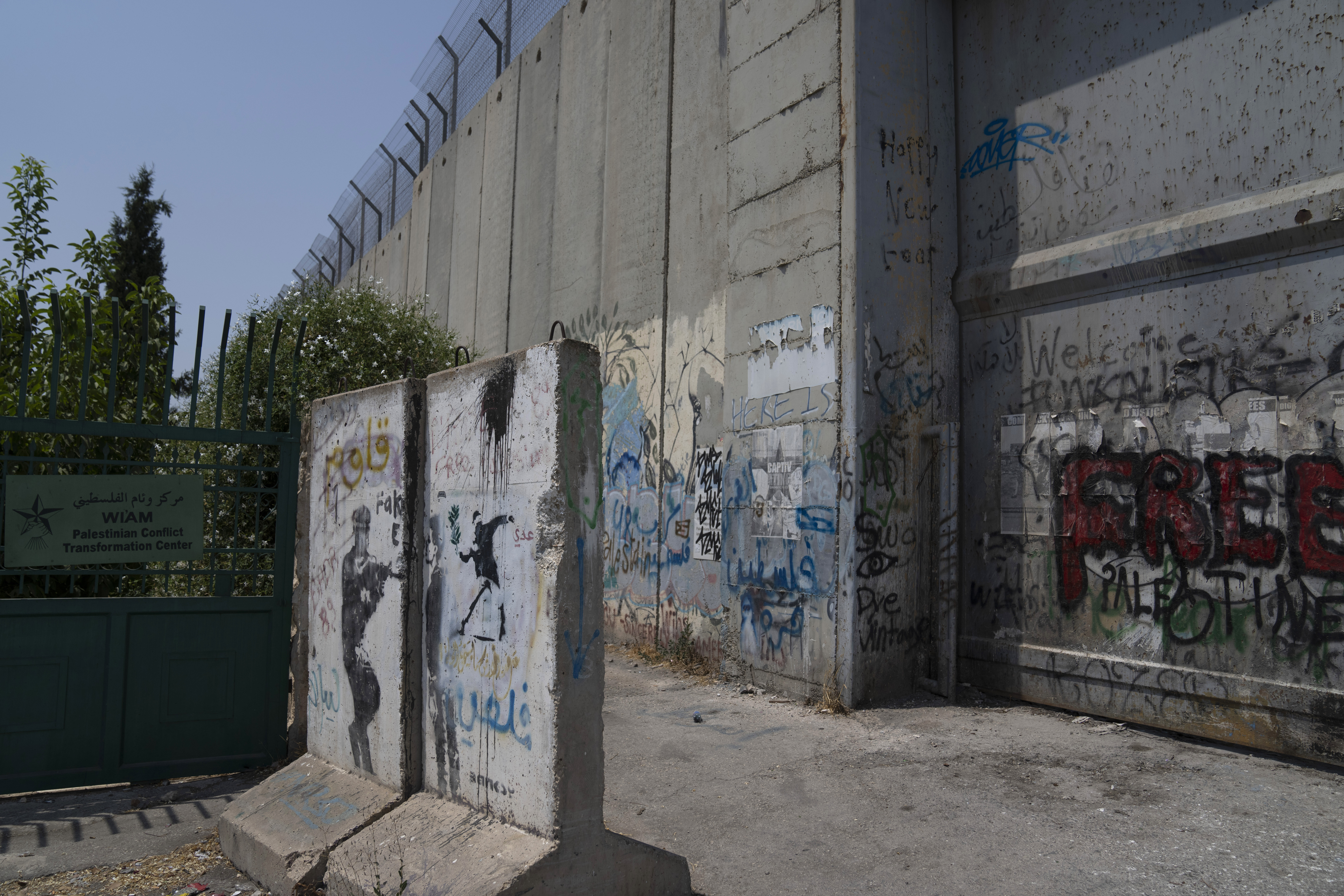 Some time later, the painting was itself subjected to graffiti by someone who obscured the painting and scrawled "RIP Bansky Rat" on the block. Palestinian residents cut out the painting and kept it in private residences until earlier this year, Abergel said.

He said the relocation involved delicate negotiations with his Palestinian associate and careful restoration to remove the acrylic paint sprayed over Banksy's work. The massive block was then enclosed in a steel frame so it could be lifted onto a flatbed truck and rolled through a checkpoint, until it arrived in Tel Aviv in the middle of the night.

It was not possible to independently confirm his account of its journey. 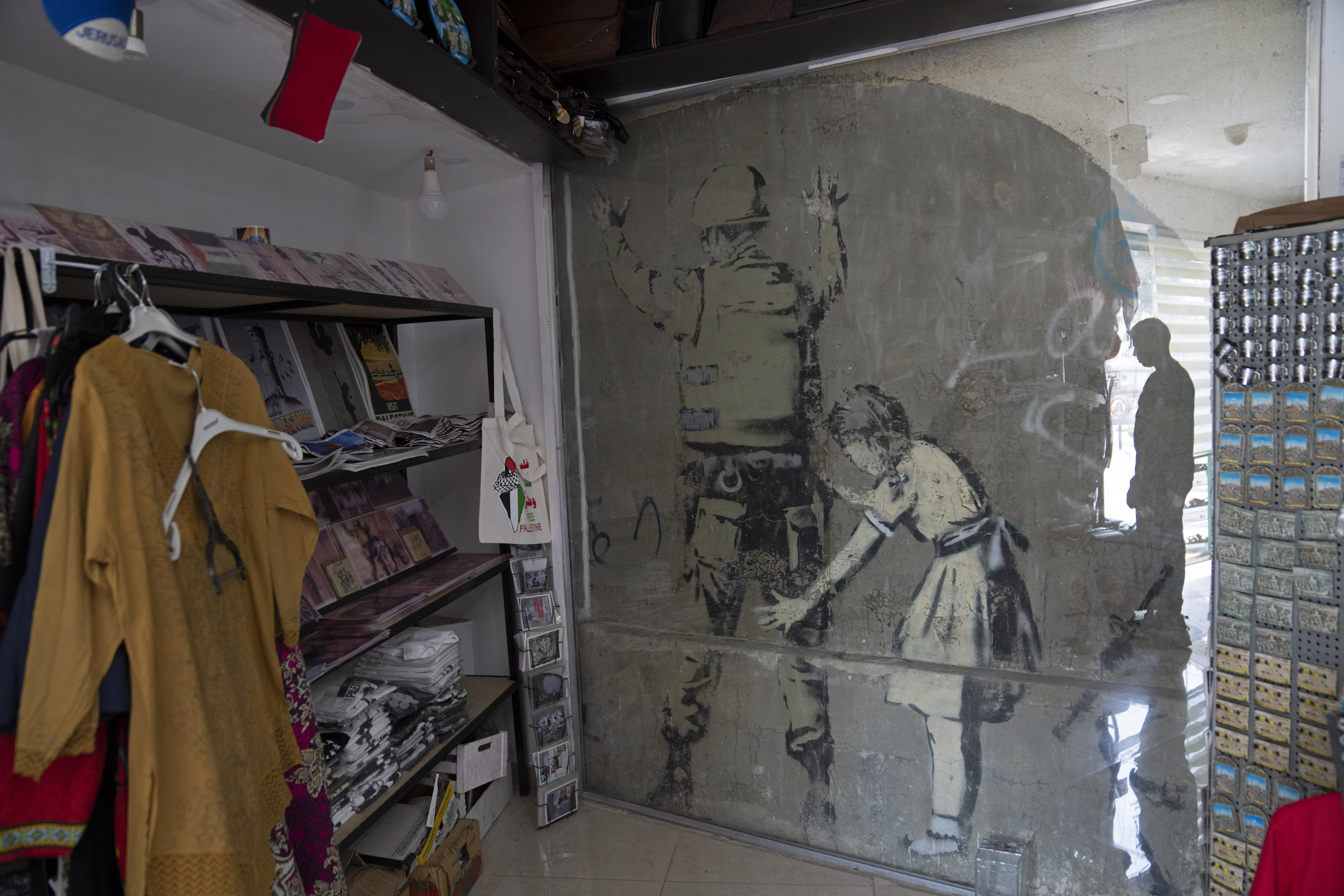 The piece now stands on an ornately patterned tile floor, surrounded by other contemporary art. Baruch Kashkash, the gallery's owner, said the roughly 2-square-metre block was so heavy it had to be brought inside by a crane, and could barely be moved from the doorway.

Israel controls all access to the West Bank, and Palestinians require Israeli permits to travel in or out and to import and export goods. Even when traveling within the West Bank, they can be stopped and searched by Israeli soldiers at any time.

Israeli citizens, including Jewish settlers, can travel freely in and out of the 60 per cent of the West Bank that is under full Israeli control. Israel prohibits its citizens from entering areas administered by the Palestinian Authority for security reasons, but there's little enforcement of that ban. The Palestinians have spent decades seeking an independent state in the West Bank, Gaza and east Jerusalem, territories captured by Israel in the 1967 Mideast war. The peace process ground to a halt more than 10 years ago.

Abergel said the artwork's move was not coordinated with the Israeli military, and that his Palestinian associates, whom he declined to name, were responsible for moving it into Israel and crossing through military checkpoints. He said he has no plans to sell the piece. 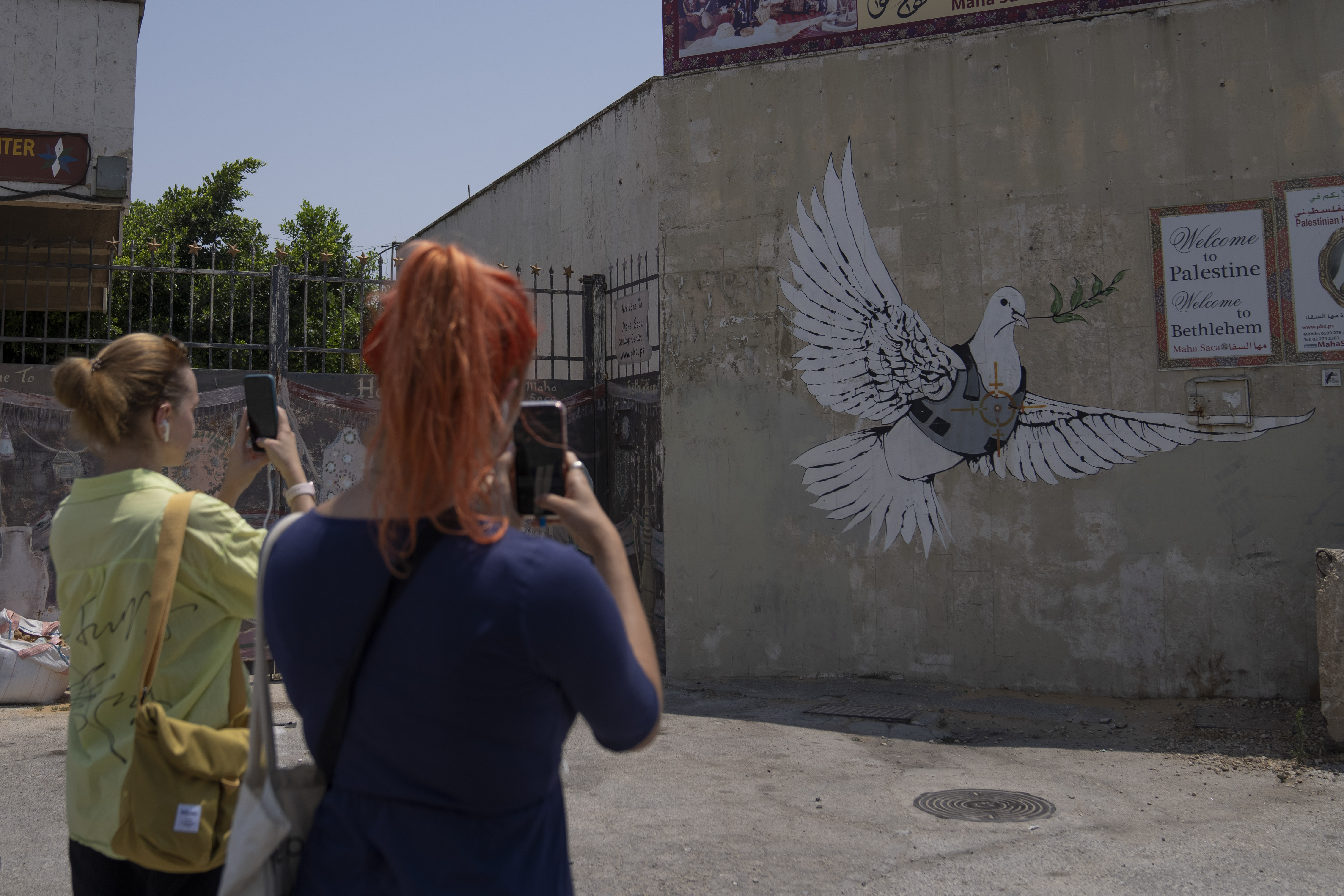 According to the international treaty governing cultural property to which Israel is a signatory, occupying powers must prevent the removal of cultural property from occupied territories. It remains unclear exactly how the 1954 Hague Convention would apply in this instance.

"This is theft of the property of the Palestinian people," said Jeries Qumsieh, a spokesperson for the Palestinian Tourism Ministry. "These were paintings by an international artist for Bethlehem, for Palestine, and for visitors to Bethlehem and Palestine. So transferring them, manipulating them and stealing them is definitely an illegal act."

The Israeli military and COGAT, the Israeli Defence Ministry body responsible for coordinating civilian affairs with the Palestinians, said they had no knowledge of the artwork or its relocation. 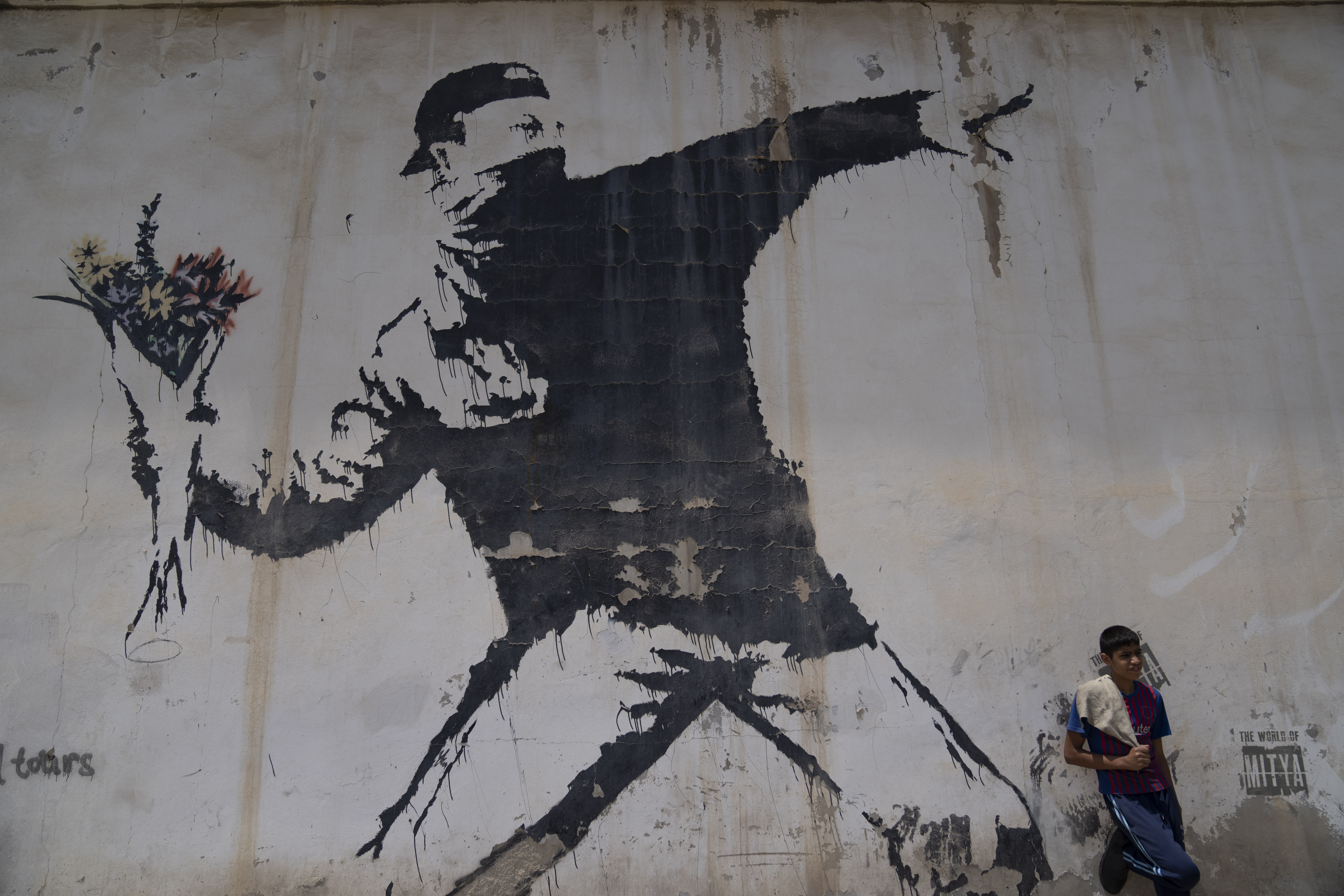 Banksy has created numerous artworks in the West Bank and Gaza Strip in recent years, including one depicting a girl conducting a body search on an Israeli soldier, another showing a dove wearing a flak jacket, and a masked protester hurling a bouquet of flowers. He also designed the "Walled Off Hotel" guesthouse in Bethlehem, which is filled with his artwork.

A spokesperson for Banksy did not respond to requests for comment.

This is not the first time the street artist's work has been lifted from the West Bank. In 2008, two other paintings — "Wet Dog" and "Stop and Search" — were removed from the walls of a bus shelter and butcher shop in Bethlehem. They were eventually bought by galleries in the United States and Britain where they were exhibited in 2011. Abergel says it's up to viewers to draw their own conclusions about the artwork and its implications.

"We brought it to the main street of Tel Aviv to be shown to the audience and to show his messages," said Abergel. "He should be happy with it."