Australia's most popular car retains its crown in 2022 T﻿oyota has remained the top-selling car brand in Australia for the seventh year in a row while electric cars have seen an uptick in sales, new data shows.

The latest ﻿Federal Chamber of Automotive Industries (FCAI) data shows Toyota vehicles had nearly triple the sales of other popular brands in Australia.

More than one million cars were sold in 2022 – 1,081,429 to be precise – despite post-pandemic supply chain challenges and delivery delays, but Aussies had one car on their wish list: the Toyota Hi-Lux.

The Toyota brand accounted for 21.4 per cent of vehicles sold, while more than 64,000 Hi-Luxes were sold.

Fellow Japanese manufacturer ﻿Mazda came in a close second with more than 95,718 models sold in 2022, about 8.4 per cent of total sales.

South Korean automaker Kia came in third with 78,330 sales and pipped Japanese manufacturer Mitsubishi, which came in just behind at fourth with 76,991 sales.

In fifth place was South Korea's Hyundai with 73,345 sales.

Despite the Toyota Hi-Lux clearly ﻿being one of the most popular cars in Australia, utes and SUVs are hotly in demand.

READ MORE: Why some are predicting a 'September dip' in Australia's property prices﻿ 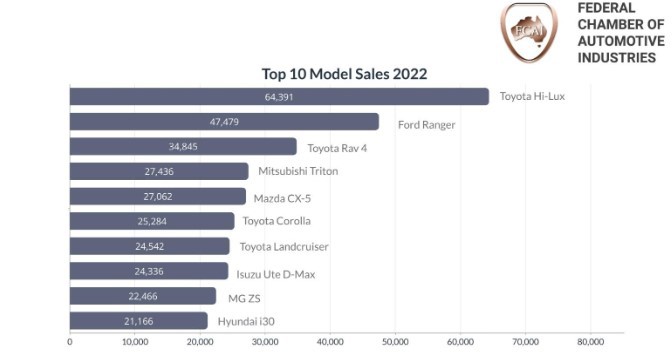 2022 didn't see a record number of cars sold as 2017 still holds the title﻿ but industry experts attribute it to the post-pandemic challenges for distribution.

FCAI chief executive Tony Weber said despite microprocessor shortages and supply chain issues following the bottleneck caused by the pandemic, a large number of cars were sold and 2023 is set to be even bigger.

﻿"While 2022 has been a year of resilience and recovery, 2023 is shaping up as one of the most significant in recent history, particularly in terms of the development of policies that set the direction for the future decarbonisation of the light vehicle fleet," he said.

Aussies were keen to buy SUVs and﻿ light commercial cars but electric vehicles also saw a rise in demand, accounting for 3.1 per cent of sales.

READ MORE: How billionaires are prepping for the apocalypse﻿ 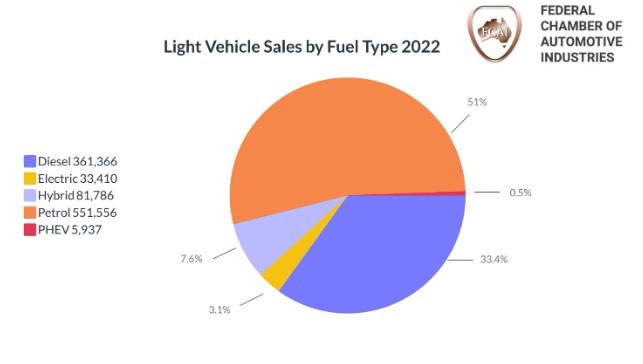 But even though electric car sales rose in 2022, Weber said the government needs to introduce ﻿more measures to make low-emission cars affordable instead of being a "luxury" market.

"We need to use the full range of low-emission technologies that are available and affordable for the majority of Australians, not just those who can afford premium vehicles," he said.