After 50 years, US man reveals to family he was a fugitive

Just before Thomas Randele died, his wife of nearly 40 years asked his golfing buddies and his co-workers from the dealerships where he sold cars to come by their home.

They gathered to say goodbye to a guy they called one of the nicest people they’d ever known, a devoted family man who gushed about his daughter, a golfer who never bent the rules, a friend to so many that a line stretched outside the funeral home a week later.

By the time of their final visit last May at Mr Randele’s house in suburban Boston, the cancer in his lungs had taken away his voice. So they all left without knowing that their friend they’d spent countless hours swapping stories with never told them his biggest secret of all.

For the past 50 years, he was a fugitive wanted in one of the largest bank robberies in Cleveland’s history, living in Boston under a new name he created six months after the heist in the summer of 1969.

Not even his wife or daughter knew until he told them in what authorities described as a deathbed confession.

How he was able to leave behind one family and create a new life, while evading a father and son from the US Marshals Service who never gave up their hunt is just now being pieced together.

Ted Conrad quickly figured out that security was fairly loose at the Society National Bank in Cleveland after he started as a teller in January 1969.

He told his buddies, “It’d be so easy for me to walk out with all kinds of money,” Russell Metcalf, his best friend from high school, said in an interview with The Associated Press.

They thought he was blowing smoke when he brought it up a few more times. Then just a day after his 20th birthday that July, Mr Conrad walked out at closing time on a Friday with a paper bag stuffed with $296,000 from the vault, a haul worth $2.2 million today.

By the time the missing money was noticed the following Monday, Mr Conrad was flying across the country. Letters sent to his girlfriend showed he made stops in Washington, DC, and Los Angeles within the first week.

In one letter, he mistakenly thought he could return in seven years when the statute of limitations expired. But once he was indicted, that was no longer true.

Mr Conrad apparently cut off contact with his entire family, including three siblings and his parents, who were divorced. Some family members eventually presumed he was dead because so many years had passed, said Matt Boettger, whose mother was Mr Conrad's older sister.

His mum, he said, was relieved more than anything to find out her brother had lived a happy life. “She thought she would go to her grave and never know,” he said.

The bank heist in 1969 didn’t capture the attention of the nation, or even the city of Cleveland. Everyone else was focused on Apollo 11′s historic flight to the moon that week.

But for John Elliott, a deputy US marshal, it was personal.

He and Mr Conrad came from the same side of town. Mr Elliott used to take his family to the ice cream shop where Mr Conrad worked. They shared a doctor.

The problem was that Mr Conrad's head start allowed him to disappear, and he was disciplined enough not to make any missteps.

The last credible sighting came in October 1969, when a Cleveland couple visiting Hawaii met a man they later realised looked very much like Mr Conrad. 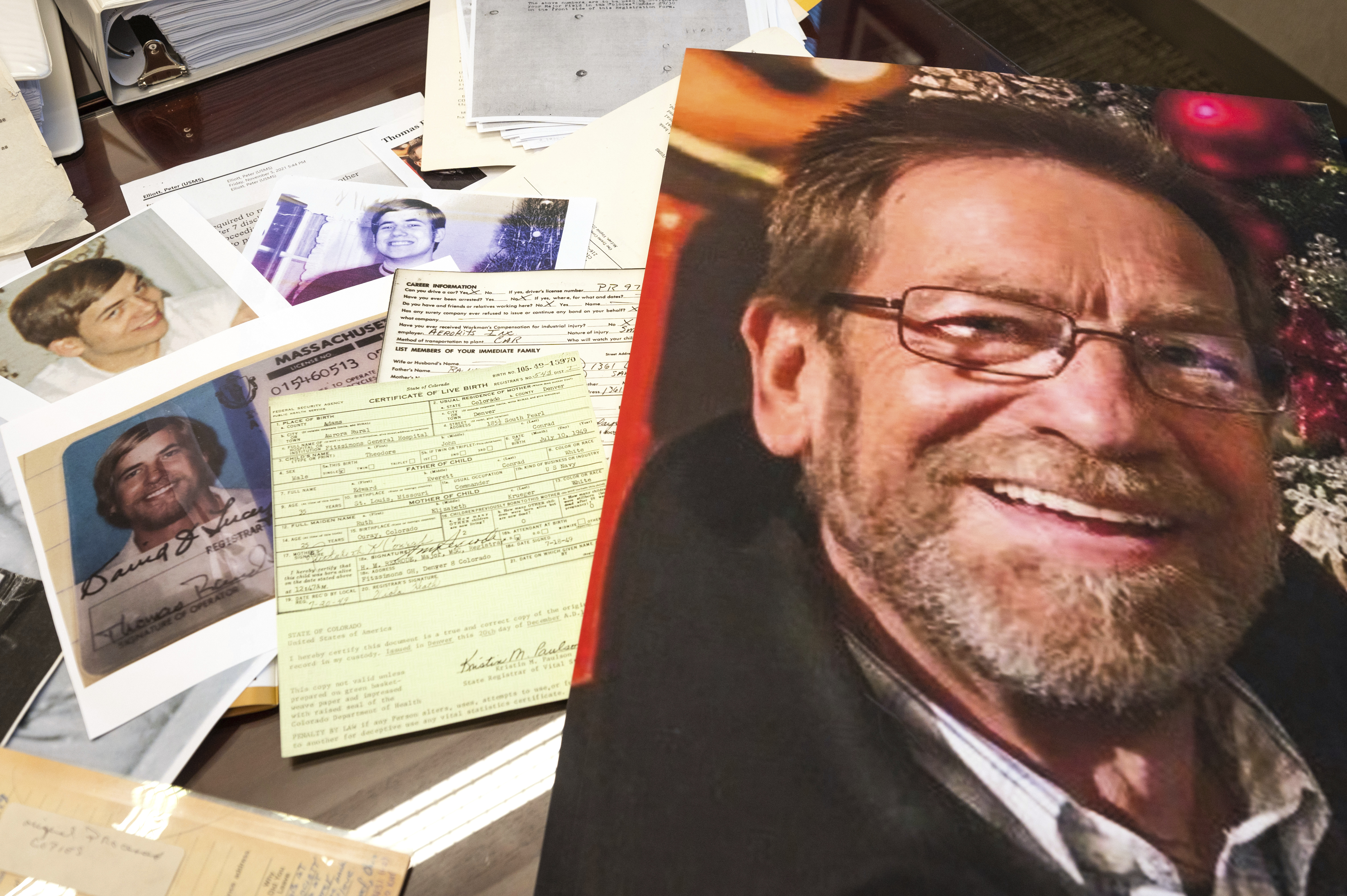 Mr Elliott travelled across the US looking for Mr Conrad and even after retiring in 1990 he would come in the office just about every week and pour over the files, said his son, Pete Elliott, now the top US marshal in Cleveland, who inherited the hunt for Mr Conrad nearly 20 years ago.

His father died in March 2020 before investigators pieced together details from Mr Randele's obituary and signatures from his past.

Then in November, Mr Randele's family confirmed that just before he died he told them his real identity and what he had done, Mr Elliott said.

“It always stayed on my dad’s mind,” he said.

“We kept this case going because it was important to my father.”

Why Mr Conrad committed the robbery has been analysed endlessly.

“It wasn’t about the money. He always wanted to impress people,” said Metcalf, his high school pal, who remembered how Mr Conrad once stole a deck of cards just to prove he could.

Investigators believe he was inspired by the 1968 movie “The Thomas Crown Affair,” about a bank executive who got away with $3.5 million and turned the heist into a game.

After the real-life robbery in Cleveland, Mr Conrad wound up in the Boston area, where much of the movie was filmed. It's a good possibility that he chose his new first name “Thomas” based on the movie, Mr Elliott said.

“He modelled his whole life after the movie,” he said.

The man known as Thomas Randele came into existence the first week of January in 1970, investigators have found in recent weeks.

That’s when Mr Conrad walked into a Social Security Administration office in Boston, asked for an identification number under his new name and made himself two years older, Mr Elliott said.

At that time, it wasn’t unusual to wait until you were an adult, so his application didn’t raise any red flags. With a new identification card, he was able to open a bank account, build credit and create his new life, Mr Elliott said.

During the 1970s, Mr Randele worked as an assistant golf pro, giving lessons at a country club outside Boston and later becoming its manager. He spent a few winters golfing in Florida, according to his obituary.

He also met his future wife not long after arriving in Boston. They were married in 1982. 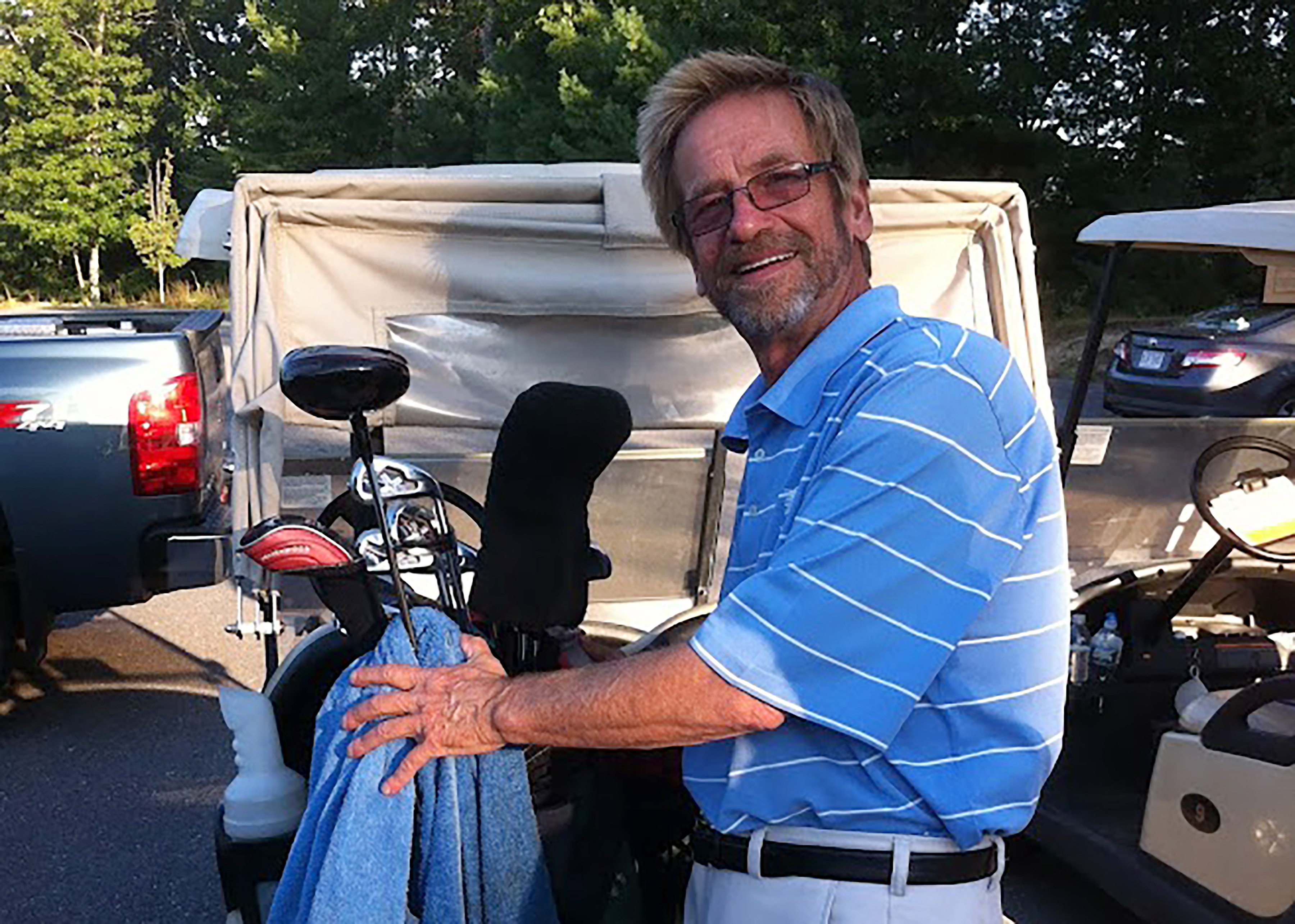 Around then he began working in the car business, selling Land Rovers and Volvos at a handful of dealerships until he retired after nearly 40 years.

It was a job that put him in front of dozens of strangers every day.

What’s not clear yet is what happened to the money. The Marshals Service is looking into whether he lost it early on through bad investments.

While Mr Randele and his wife, Kathy, lived most of their years in a pleasant Boston suburb, they filed for bankruptcy protection in 2014. Court records showed they then owed $220,000 in credit card debt and had few assets.

His wife told Cleveland.com in November that her husband was a great man and that she was still grieving. She has declined interview requests.

No one would have guessed that Mr Randele, who was 71 when he died, was someone trying to hide from authorities.

Among the many people he became friends with over the years was an FBI agent in Boston, Mr Elliott said.

He never shied away from anyone on the golf course or in the auto showrooms where he'd keep a set of clubs and swing his 7-iron when sales were slow.

“He was just a gentle soul, you know, very polite, very well spoken,” said Jerry Healy, who first met Mr Randele at a Woburn, Massachusetts, dealership where they talked daily for years.

The two were among a group five or six car salesmen who stuck together for much of their careers. None of them, Mr Healy said, ever suspected something like this in Mr Randele's past. 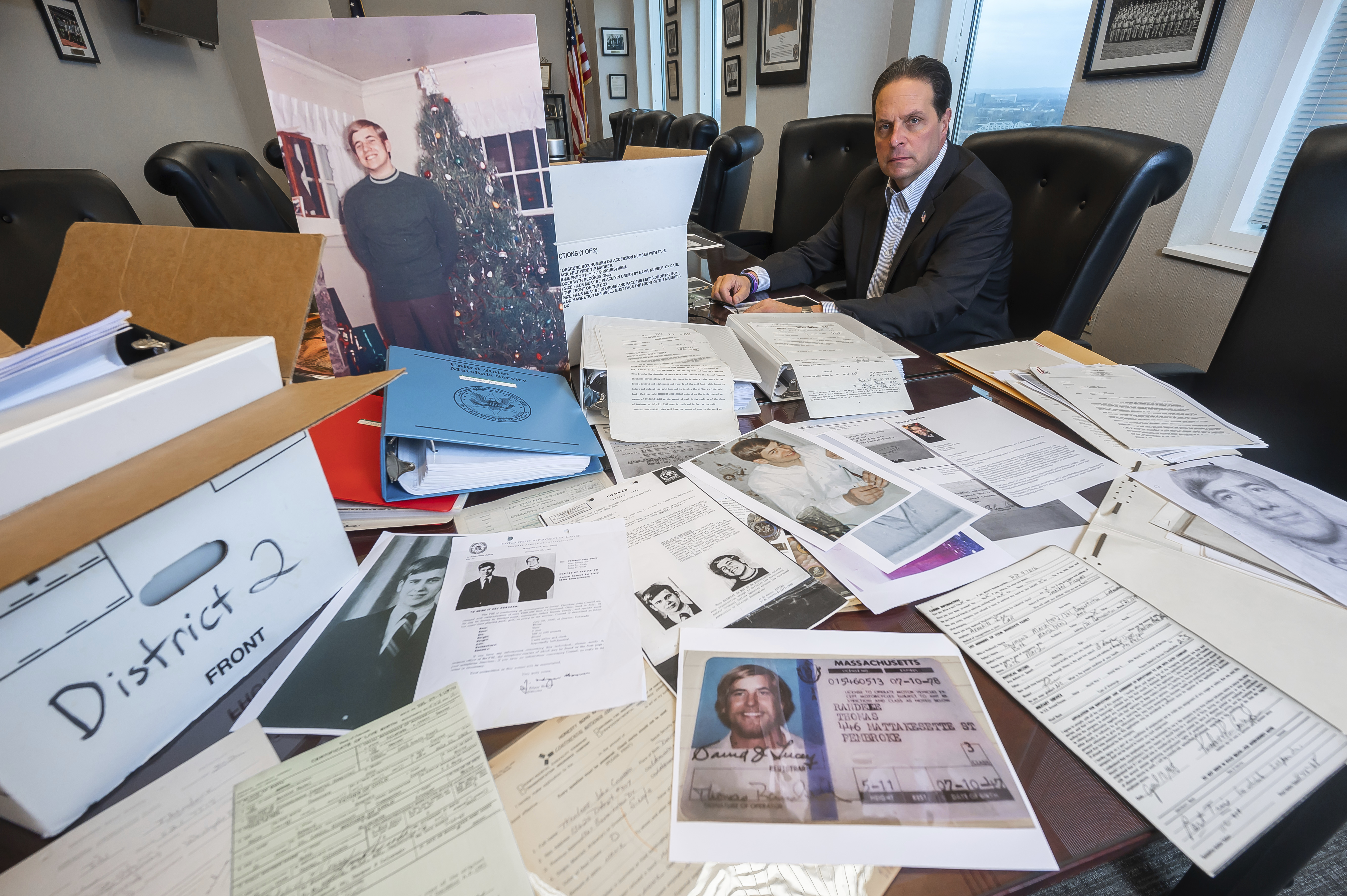 “It never dawned on us, and that’s a half a dozen guys that aren’t easy to fool,” he said.

His former co-workers said they never heard Mr Randele say a bad word about anybody or raise his voice. They all said he was the best golfer they ever knew. Everyone wanted him on their side when there was a tournament.

He wasn't much of a drinker and never put down any side bets while playing, said Bob Van Wert, who first met Mr Randele while golfing and then later worked with him.

They remembered he could always control his emotions and rarely got upset, even on the course, where he had such a pretty swing that he once bested Hall of Fame golfer Johnny Miller at a charity event, his former boss remembered.

Matt Kaplan, who managed two dealerships where Mr Randele worked and golfed with him every Sunday morning for many years, called him the definition of a gentleman.

“The only way it makes sense is that at that age he was just a kid, and it was a challenge kind of thing,” Mr Kaplan said.

“It’s not like he became a professional bank robber."

"If he would have told us way back when, I don’t think we would have believed him because he wasn’t that kind of guy,” he said. 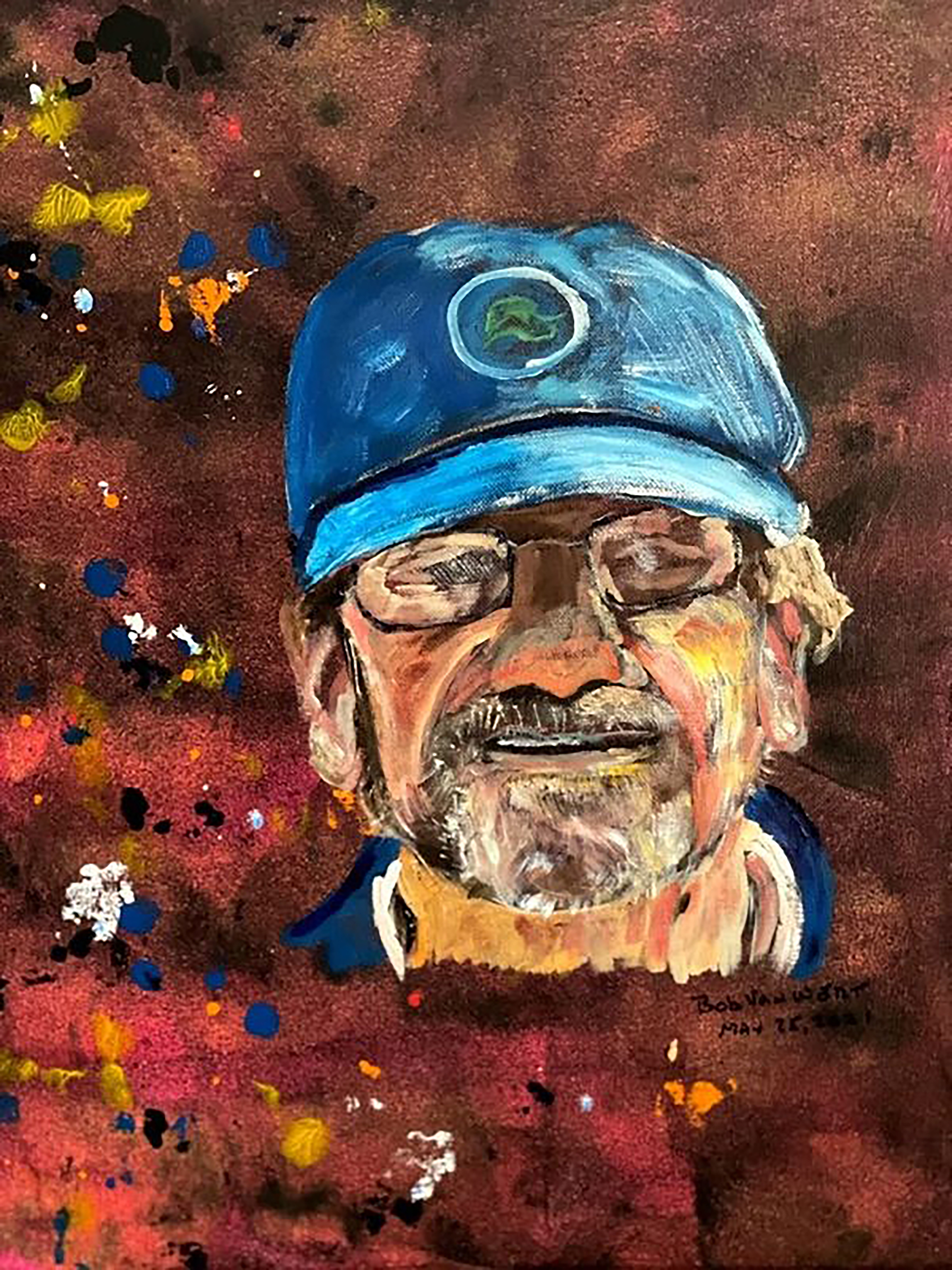 “The man was different than the kid.”

In the early days after Mr Randele's identity was revealed, his friends couldn't believe it. But now looking back, there are a few things that make sense.

How he always had a beard. The photos of him wearing dark sunglasses on the golf course. His reluctance to talk about where he grew up or his extended family.

“You know all the years I knew Tommy, I never heard him mention a sister or a mother or a brother or a father. Everything was kind of generalised,” Mr Healy said.

“You could never pry anything from him,” said Brad Anthony, another close friend.

“I figured maybe he had a bad childhood and he didn’t want to talk about it.”

Still, he said it's almost impossible to believe.

“It just seems so out of character for the Tom I knew,” he said. All of his friends agreed that what happened long ago hasn't changed how they feel about him.

“The man I knew didn’t change all of a sudden because of something he did a lifetime ago,” Mr Healy said.

“He was a good man, he was my friend and I think no less of him today than I did before this all came out. And I’d love to go play a round of golf with him.”

Josef Fritzl could be released from prison despite life sentence