Archbishop Desmond Tutu, the Nobel Peace Prize-winning Anglican cleric whose good humour, inspiring message and conscientious work for civil and human rights made him a revered leader during the struggle to end apartheid in his native South Africa, has died. He was 90.

In a statement confirming his death on Sunday, South African President Cyril Ramaphosa expressed his condolences to the archbishop's family and friends, calling him "a patriot without equal".

"A man of extraordinary intellect, integrity and invincibility against the forces of apartheid, he was also tender and vulnerable in his compassion for those who had suffered oppression, injustice and violence under apartheid, and oppressed and downtrodden people around the world," Mr Ramaphosa said.

Archbishop Tutu had been in ill health for years. In 2013, he underwent tests for a persistent infection and he was admitted to hospital several times in following years.

For six decades, Archbishop Tutu — known affectionately as "the Arch" — was one of the primary voices in exhorting the South African government to end apartheid, the country's official policy of racial segregation.

After apartheid ended in the early '90s and the long-imprisoned Nelson Mandela became president of the country, Archbishop Tutu was named chair of South Africa's Truth and Reconciliation Commission.

His civil and human rights work led to prominent honours from around the world. President Obama awarded him the Presidential Medal of Freedom in 2009. 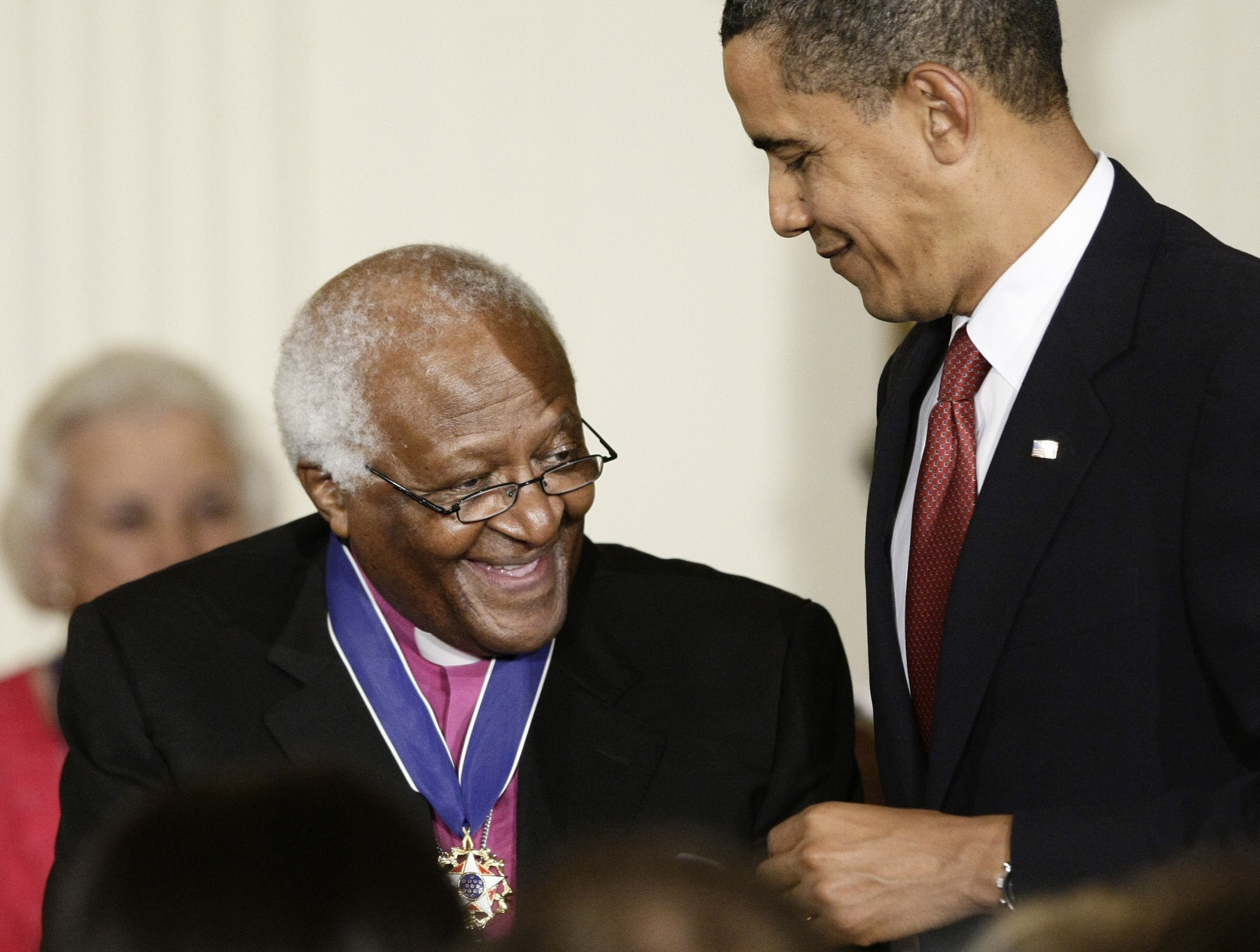 In 2012, he was awarded a US$1 million ($1.4 million) grant by the Mo Ibrahim Foundation for "his lifelong commitment to speaking truth to power".

The following year, he received the Templeton Prize for his "life-long work in advancing spiritual principles such as love and forgiveness which has helped to liberate people around the world".

Most notably, the archbishop received the 1984 Nobel Peace Prize, following in the footsteps of his countryman, Albert Lutuli, who received the prize in 1960.

The Nobel cemented Archbishop Tutu's status as an instrumental figure in South Africa, a position he gained in the wake of protests against apartheid.

Despite anger about the policy within South Africa, as well as widespread global disapproval — the country was banned from the Olympics from 1964 through 1988 — the South African government quashed opposition, banning the African National Congress political party and imprisoning its leaders, including Mr Mandela.

It was up to the clergy to take the lead in speaking out, said Reverend Frank Chikane, the former head of the South African Council of Churches and a Tutu colleague.

"We reached the stage where the church was a protector of the people, who was the voice for the people," he told CNN.

READ MORE: 'We're all going to get Omicron': NSW Health Minister expects everybody in NSW will contract virus The path was rocky

In the 1950s, Archbishop Tutu had resigned as a teacher in protest of government restrictions on education for Black children, the Bantu Education Act.

He was ordained in 1960 and spent the '60s and early '70s alternating between London and South Africa.

In 1975 he was appointed dean of St Mary's Cathedral in Johannesburg and immediately used his new position to make political statements.

"When we were appointed we said … 'Well, we'll live in Soweto,'" he told the Academy of Achievement, referring to the black townships of Johannesburg.

"And so that — we begin always by making a political statement even without articulating it in words." 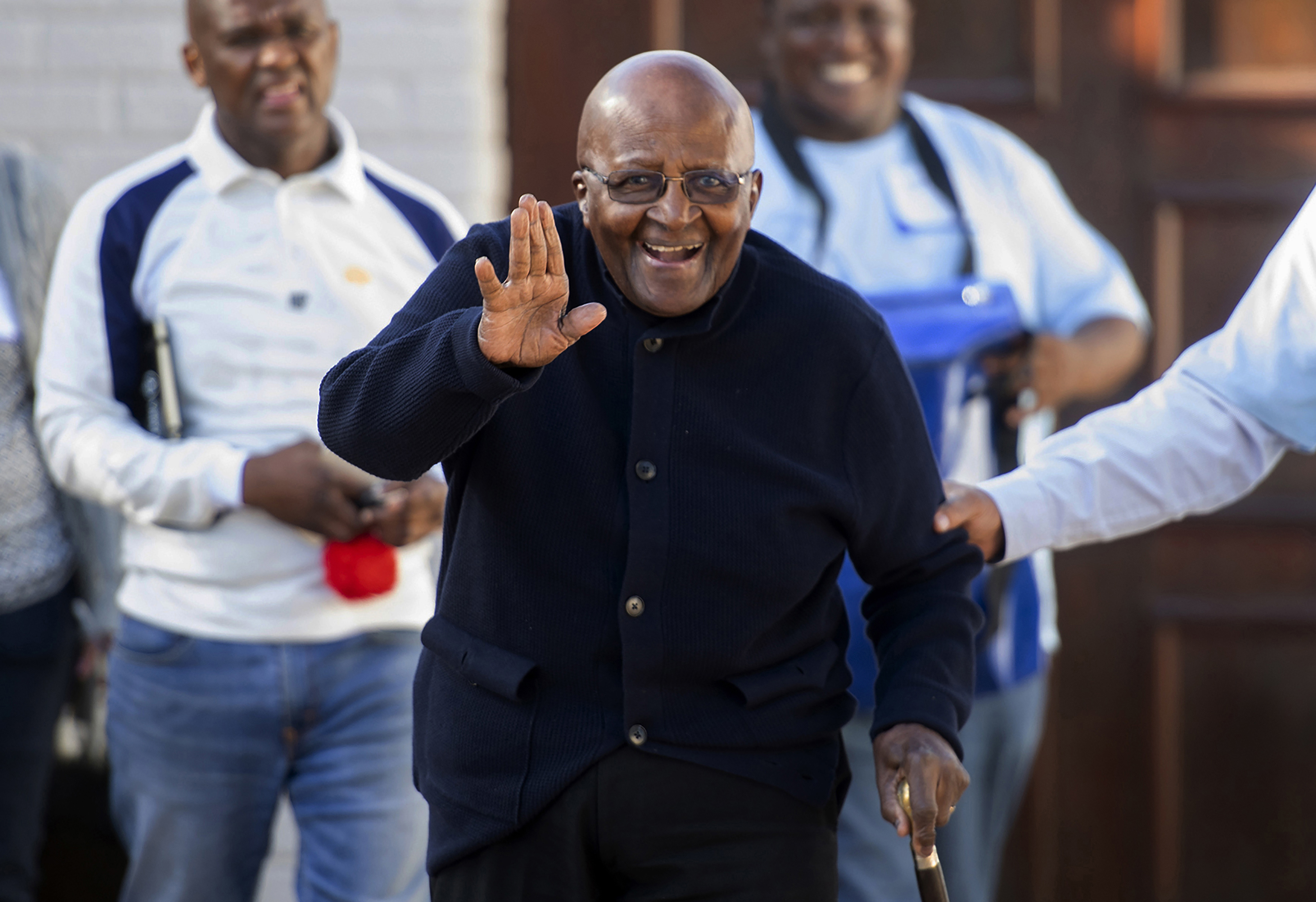 It wasn't a plan, though from an early age he'd been inspired by Trevor Huddleston, a priest and early anti-apartheid activist who worked in a Johannesburg slum in the 1950s. By embarking on this path, he inspired thousands of his countrymen — and more around the world.

"Desmond Tutu had no reason to act as he did other than his profound sense of our shared humanity in working for a world in which justice and the wellbeing of all is an expression of his ethical leadership of compassion," wrote Episcopal priest Robert V Taylor on CNN in 2011.

Archbishop Tutu believed he didn't have a choice, even if the path was rocky.

"I really would get mad with God," he told the Academy of Achievement

"I would say, 'I mean, how in the name of everything that is good can you allow this or that to happen?'.

"But I didn't doubt that ultimately good, right, justice would prevail." 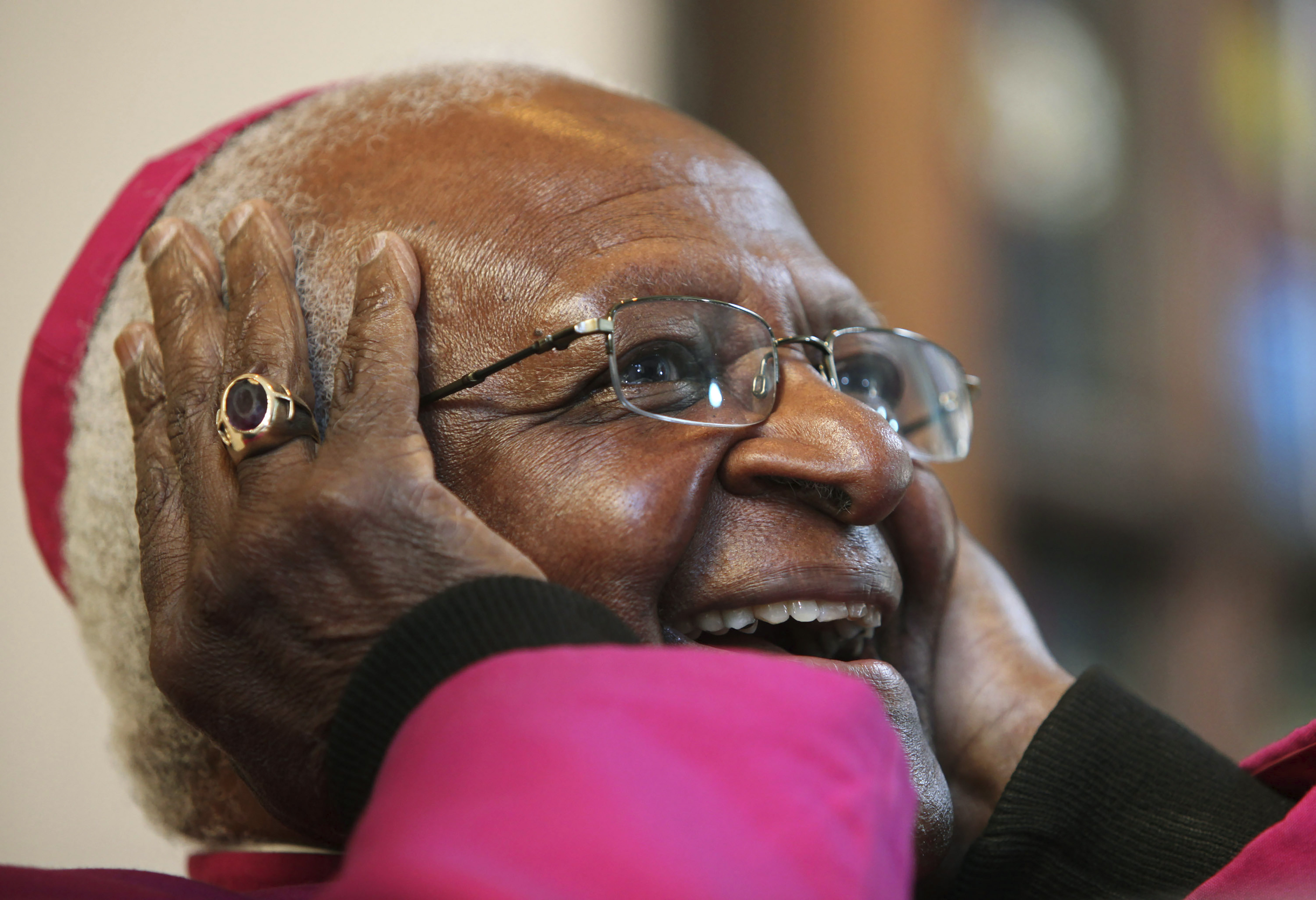 His father was a teacher and his mother was a domestic worker, and as a young boy, he had plans to become a doctor, partly thanks to a boyhood bout of tuberculosis, which put him in the hospital for more than a year. He even qualified for medical school, he said.

But his parents couldn't afford the fees, so teaching beckoned.

"The government was giving scholarships for people who wanted to become teachers," he told the Academy of Achievement.

"I became a teacher and I haven't regretted that."

However, he was horrified at the state of Black South African schools, and even more horrified when the Bantu Education Act was passed in 1953 that racially segregated the nation's education system.

He resigned in protest. Not long after, the Bishop of Johannesburg agreed to accept him for the priesthood — Archbishop Tutu believed it was because he was a Black man with a university education, a rarity in the 1950s — and took up his new vocation. The 1960s and 1970s were tumultuous times in South Africa. In March 1960, 69 people were killed in the Sharpeville Massacre, when South African police opened fire on a crowd of protesters.

Mr Lutuli, an ANC leader who preached non-violence, was awarded the Nobel Peace Prize later that year — while banned from leaving the country. (The government finally let him go for a few days to accept his prize.)

Mandela — then a firebrand leading an armed wing of the ANC — was arrested, tried and, in 1964, sentenced to life in prison. In the early '70s, the government forced millions of Black people to settle in what were called "homelands".

Tutu spent many of these years in Great Britain, watching from afar, but finally returned for good in 1975, when he was appointed dean of St Mary's Cathedral in Johannesburg. The next year he was consecrated Bishop of Lesotho and gained renown for a May 1976 letter he wrote to the prime minister, warning of unrest.

"The mood in the townships was frightening," he told the Academy of Achievement.

A month later Soweto exploded in violence. More than 600 died in the uprising. "He was one of the most hated people, particularly by white South Africa, because of the stance he took," former Truth and Reconciliation Commission member Alex Boraine told CNN.

Mr Chikane said his South African Council of Churches colleague's moral authority was "both his weapon and his shield, enabling him to confront his oppressors with a rare impunity."

South Africa was becoming a pariah country. Demonstrators in the United States protested corporate investment in the nation and Congress backed up the stance with the 1987 Rangel Amendment. The United Nations established a cultural boycott.

With his scarlet vestments, Archbishop Tutu cut a distinctive figure as he preached from the bully pulpit — perhaps never more so than in his Nobel Prize speech in 1984. After reeling off the prejudices and inequalities of the apartheid system, he summed up his thoughts.

"In short, this land, richly endowed in so many ways, is sadly lacking in justice," He said.

There were more injustices to come: assassinations, allegations of hit squads, bombings. In 1988, two years after being named Archbishop of Cape Town, becoming the first Black man to head the Anglican Church in South Africa, he was arrested while taking an anti-apartheid petition to South Africa's parliament.

But the tide was turning. The next year, the archbishop led a 20,000-person march in Cape Town.

Four years later, in 1994, Mr Mandela would be elected president. Archbishop Tutu compared being allowed to vote for the first time to "falling in love" and said — behind the birth of his first child — introducing Mr Mandela as the country's new president was the greatest moment of his life. 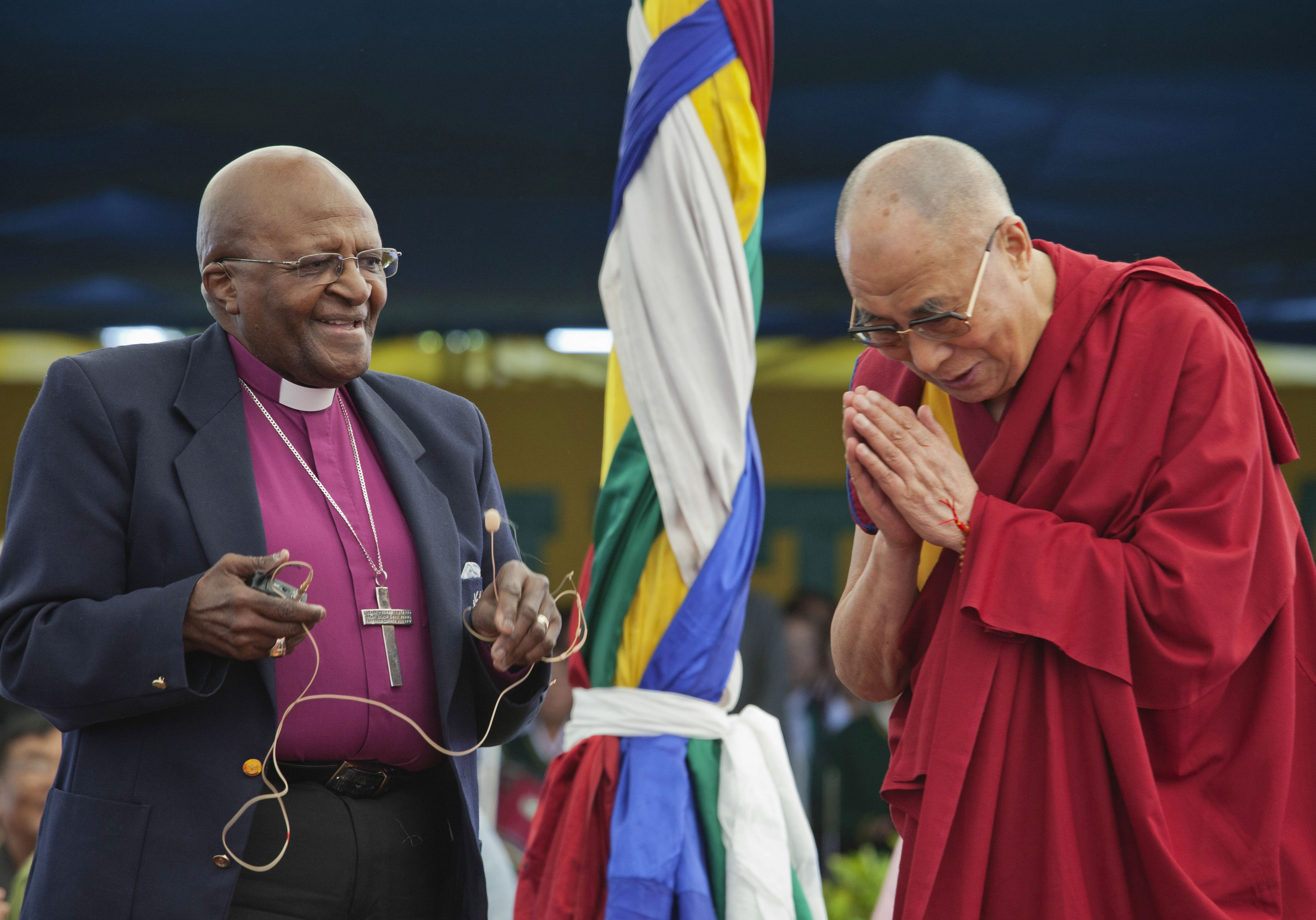 Archbishop Tutu's work was not done, however. In 1995 Mandela appointed him chair of the Truth and Reconciliation Commission to address the human rights violations of the apartheid years. The archbishop broke down at the TRC's first hearing in 1996.

The TRC gave its report to the government in 1998. Archbishop Tutu established the Desmond Tutu Peace Trust the same year.

He returned to teaching, becoming a visiting professor at Emory University in Atlanta for two years and later lecturing at the Episcopal Divinity School in Cambridge, Massachusetts.

He published a handful of books, including No Future Without Forgiveness (1999), God Is Not a Christian (2011) and a children's book, Desmond and the Very Mean Word (2012).

He retired from public service in 2010 but remained unafraid to take controversial positions. He called for a boycott of Israel in 2014  and said that former US President George W Bush and former UK Prime Minister Tony Blair should be "made to answer" at the International Criminal Court for their actions around the Iraq war.

But he was also distinguished for his sense of humour, embodied in a distinctive, giggle-like laugh. 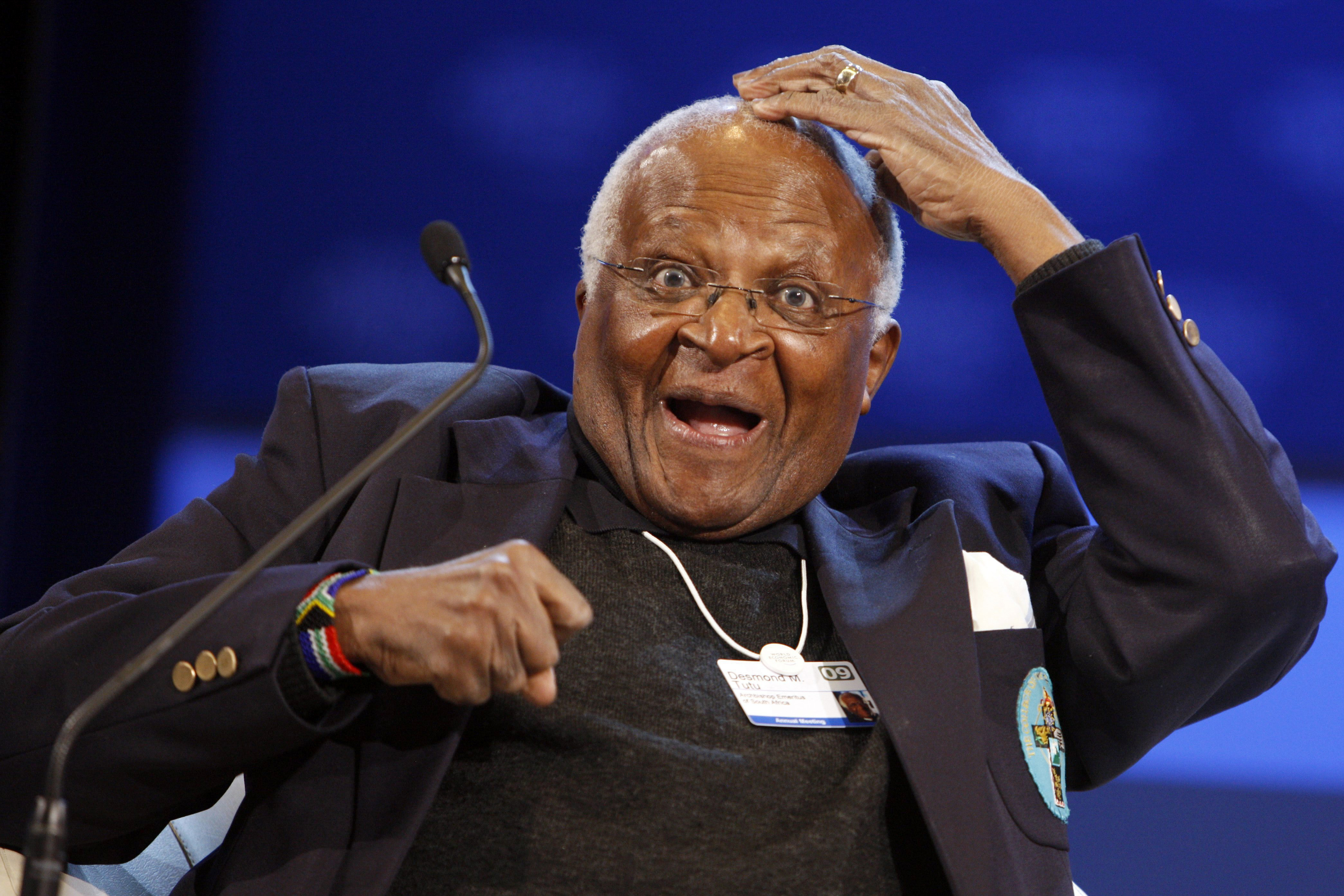 While visiting The Daily Show in 2004, he broke up at Jon Stewart's jokes.

And he poked fun at On Being interviewer Krista Tippett in 2014, chiding her for not offering him the dried mangos — his favourite — she'd brought along.

Despite all the praise and fame, however, he told CNN he didn't feel like a "great man".

"I just know that I've had incredible, incredible opportunities. … When you stand out in a crowd, it is always only because you are being carried on the shoulders of others."

For all of his good works, he added, there may have been another reason he had so many followers.

"They took me only because I have this large nose," he said.

"And I have this easy name, Tutu."

Archbishop Tutu is survived by his wife of more than 60 years, Nomalizo Leah Tutu, with whom he had four children, Trevor, Theresa, Naomi and Mpho.